You are the owner of this article.
Edit Article Add New Article
You have permission to edit this article.
Edit
Home
News
Features
Opinion
Sports
Obituaries
Archives
e-Edition
Subscribe
Photo Reprints
Classifieds
How Do I?

Editor's Note: TheHP.com has dropped the paywall for many public health-related stories. If you appreciate local journalism, please help us continue to keep Southwest Michigan informed by considering a subscription to HP All-Access (print and digital) or Online Access. Learn more here.

BENTON HARBOR — A group of Benton Harbor residents filed a federal class action lawsuit Wednesday against city and state officials, saying they didn’t do enough to protect them against lead in some of the city’s drinking water.

Benton Harbor has been under an advisory for having higher-than-acceptable amounts of lead in some of its drinking water since October 2018. In February 2019, the state started giving out free water filters to filter out the lead until lead water service lines could be replaced.

On Oct. 6, state officials announced that residents shouldn’t use the city’s water for cooking, drinking, brushing teeth, rinsing foods and mixing powdered infant formula until the filters were tested to make sure they were working effectively.

Gov. Gretchen Whitmer later signed an executive directive that all state agencies take action to make sure Benton Harbor residents receive free bottled water and that all of the lead service lines be replaced within 18 months. 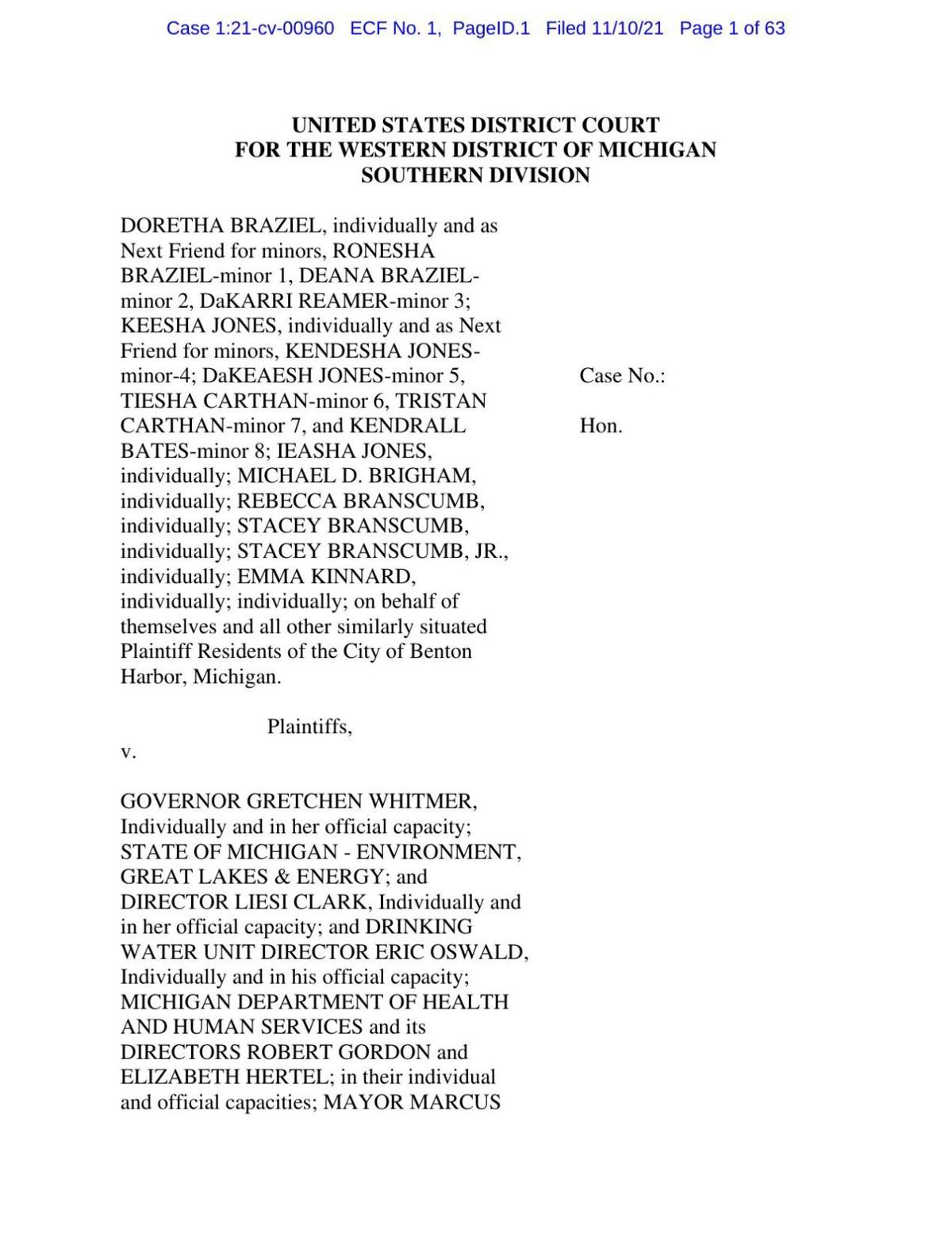 Defendants in the lawsuit include Whitmer – along with the state and several other state officials – Mayor Marcus Muhammad, City Manager Ellis Mitchell, former City Manager Darwin Watson and former Water Plant Operator Michael O’Malley. Also named was the city and F&V Operations and Resource Management, the company that has been supplying the city with a certified water plant operator since O’Malley left.

The lawsuit, filed in U.S. District Court for the Western District of Michigan, states that the plaintiffs represent the thousands of residents who “have experienced or will continue to experience serious personal injury and property damage caused by the defendants’ deliberate misconduct, and active decision making not to enforce the U.S. and State of Michigan Safe Drinking Water Act.”

When reached by phone Thursday, Emma Kinnard, one of the plaintiffs, said she has been trying to draw the attention of the city commissioners to the problem for years with no luck.

She said that a few weeks after the first lead advisory was issued, she showed city commissioners two glass jars full of tainted water from her home, asking that it be tested, but it never was.

“They say they’ll get back with you later, but they never do,” she said.

She said her skin has lesions on it that she believes are from lead in her home’s water.

“I don’t know for sure, but I’m having it tested to see what effect it’s having on my skin,” she said.

As a retired paraprofessional in the Benton Harbor school district, she said she’s concerned what effect the lead in the water is having on the children who drink it.

“The water is poison because of the lead,” she said. “We have devastating personalities among some of the children and a high crime rate. So, you ask yourself, ‘What is causing these children to behave like this?’”

She said she knew the lawsuit was forthcoming, but didn’t know it had been filed until contacted by The Herald-Palladium on Thursday.

Kinnard said she helped community activist Edward Pinkney, who lives in Benton Township, start the Benton Harbor Community Water Council three years ago because she was concerned about the lead in the water.

She said she wants residents not to have to pay their water bills until the water is safe, and she wants all residents to be tested for lead poisoning.

The lawsuit asks for the courts to certify the case as a class action and declare the conduct of the defendants unconstitutional.

In addition, the lawsuit asks that the lead service lines be replaced immediately, water be delivered to each home until new service lines are replaced and a medical monitoring process be established to test the blood lead levels for all city residents.

The lawsuits requests that the defendants pay for compensatory and punitive damages, along with reasonable attorney fees.

Muhammad said he couldn’t comment on the suit per his attorney’s orders. Mitchell was unavailable for comment.

The attorneys representing the plaintiffs are Alice Jennings and Carl Edwards from Detroit and Kevin Hannon from Denver, Colo.

This lawsuit comes the same week that a federal judge approved a $626 million deal to settle lawsuits filed by Flint residents whose tap water was contaminated by lead in 2015.