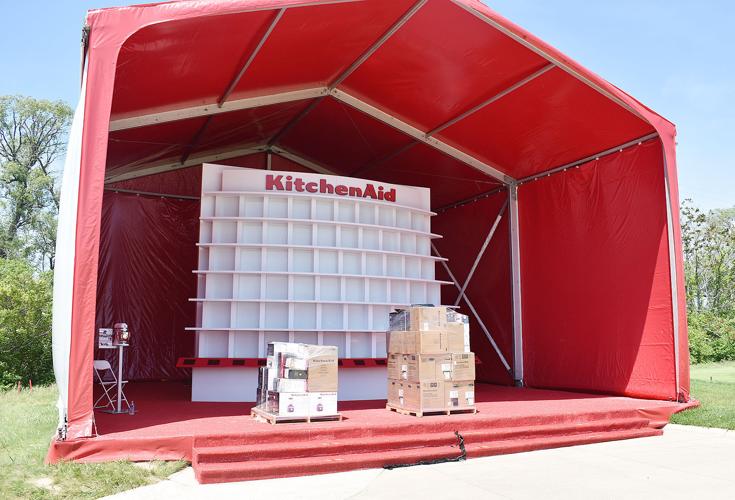 Championship Director Brandon Haney says it will take two weeks to tear down the buildings from the 2022 KitchenAid Senior PGA Championship, which ended Sunday at Harbor Shores in Benton Harbor. 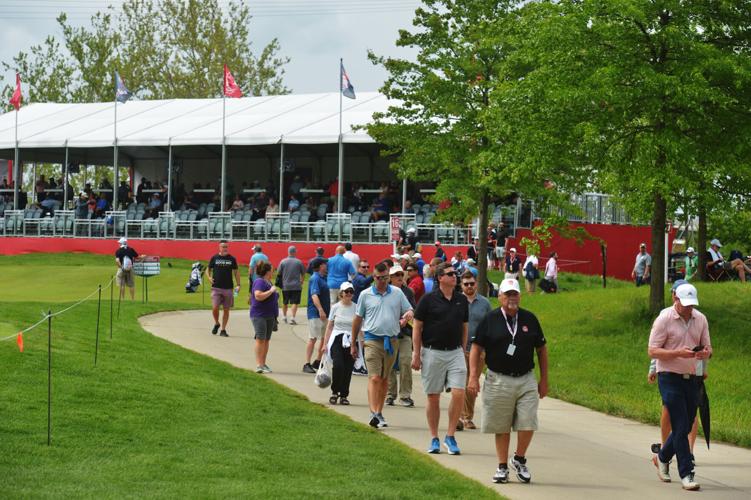 Spectators walk near the 16th hole during the first round of the 2022 KitchenAid Senior PGA Championship on Thursday at Harbor Shores in Benton Harbor.

BENTON HARBOR — The 2022 KitchenAid Senior PGA Championship was bigger and better than ever despite a damp start at Harbor Shores in Benton Harbor, officials said Monday.

“It was awesome.” Benton Harbor Mayor Marcus Muhammad said. “I think withstanding some weather challenges, the people stepped up their support and made the final two days epic.”

“Friday was a little bit drizzly and not so great, but the rest of the weekend made up for it,” she said.

The championship has been held at Harbor Shores every other year since 2012 except in 2020, when it was canceled due to the pandemic.

Championship Director Brandon Haney said they don’t have a final count of how many people came to the event, but it appeared to be more than normal.

“Especially Saturday and Sunday, you could tell the crowds were really good,” he said. “I think there was a lot of pent up demand with it being four years since it was last hosted (by Harbor Shores).”

Besides watching golf, he said other popular activities were the chef demonstrations and Kids Day at the KitchenAid Fairway Club, along with the YMCA Kids Zone at Jean Klock Park.

“It was so good to see a lot of smiling faces and people out here enjoying themselves,” Haney said.

Haney said the weather was never bad enough to cancel or even delay the championship.

Now, he said, they are gearing up to hold the championship at Harbor Shores again in 2024.

“We are always looking at – how can we improve this next time?” he said. “We want it to be a good experience for everybody, from our players to volunteers and our spectators and our sponsors. Being able to come back here in two years, we can see it as it is happening and say, ‘We need to make a little tweak here.’”

Deb O’Connor of Whirlpool Corp., the lead for KitchenAid activation for the Senior PGA, said the new activities were well received, including the live music performed Friday, Saturday and Sunday near the end of the day in the entrance courtyard.

“People stayed and listened to music and tasted the drinks from the Makers Trail and it was beautiful,” she said.

Goos said the Senior PGA coming to the area is great for area businesses.

“The restaurants were full. Downtown was hopping. So I would say from an economic development perspective, everything went well,” she said.

Muhammad said the championship has helped to showcase Southwest Michigan in a positive light over the past 10 years.

“It’s designed to bring communities together and strengthen communities so they can work together beyond the event to improve and build,” he said.

Muhammad said many of the benefits of the Senior PGA coming to the area may not be felt for weeks or even months.

“People may come and vacation. People may recommend the area to relatives. It’s gradual growth,” he said. “It’s an opportunity that can open up other opportunities.”

The 2023 KitchenAid Senior PGA Championship will be held the final week of May at Fields Ranch East at PGA Frisco in Texas.