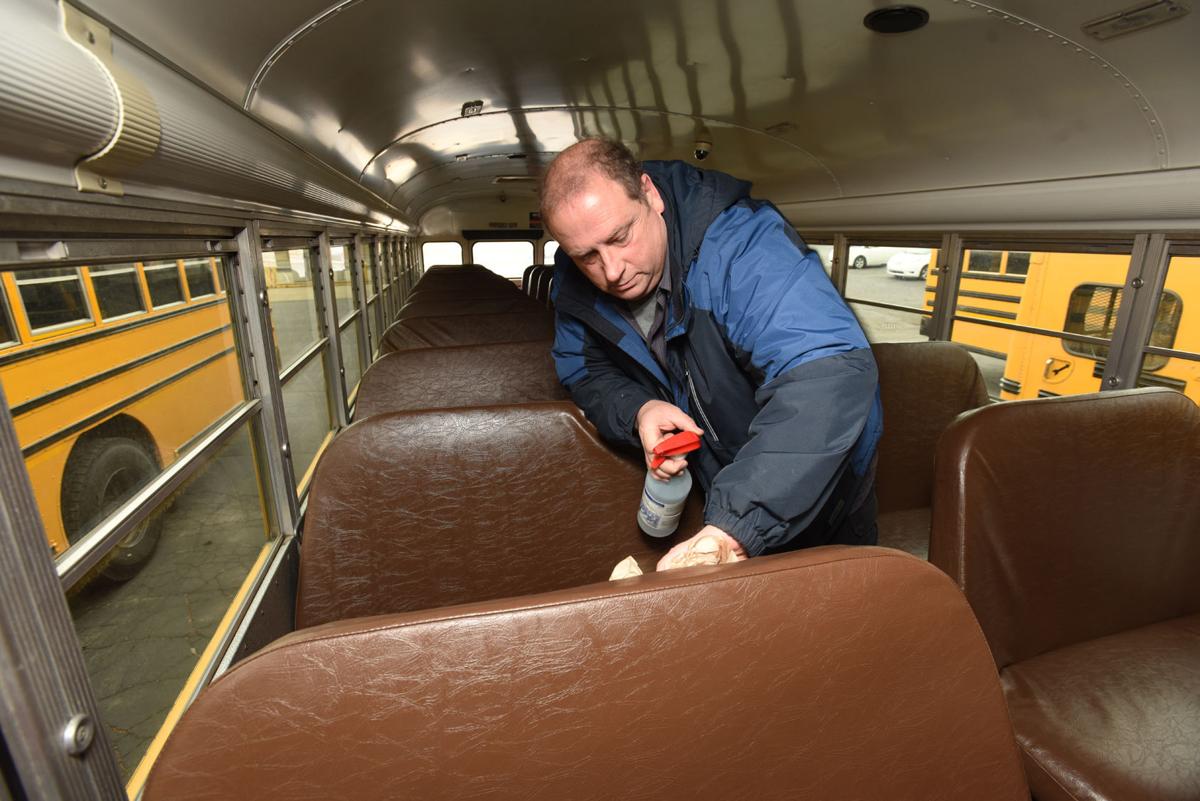 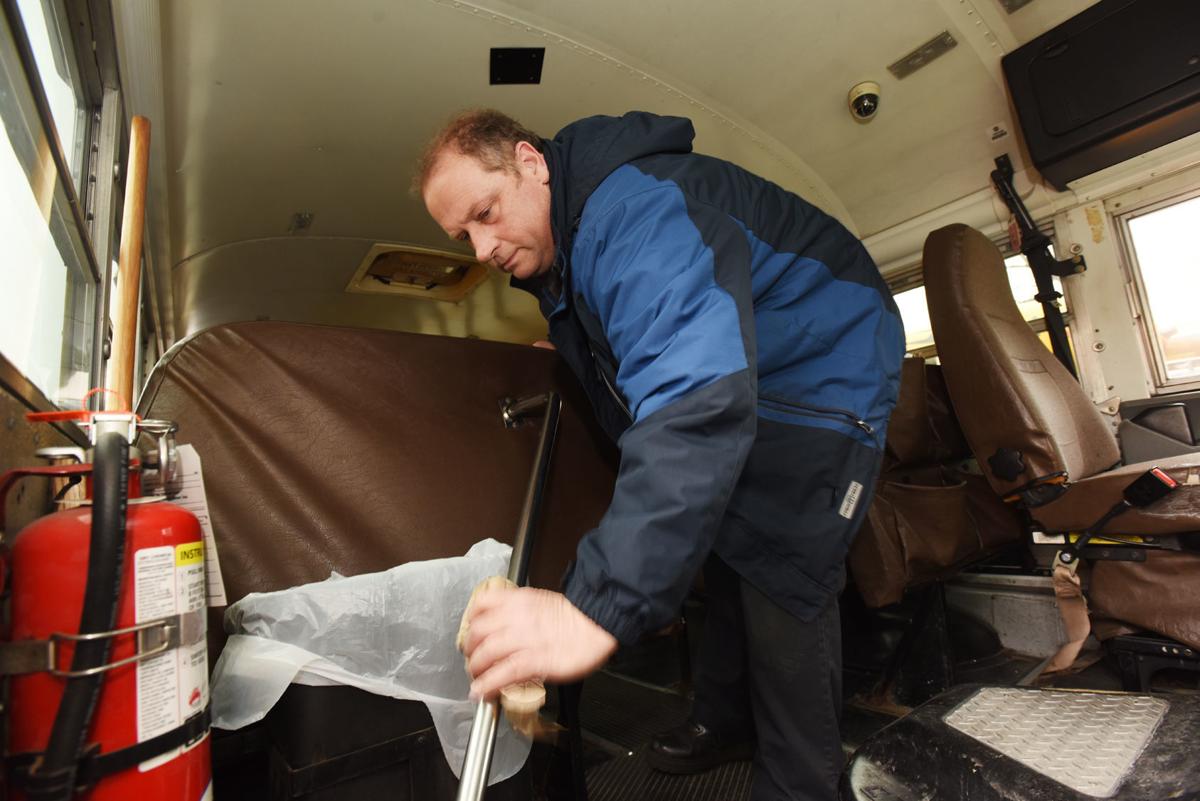 McIntyre cleans a school bus railing with disinfectant Wednesday in Bridgman as area schools districts are ramping up efforts to control the possible spread of illness.

McIntyre cleans a school bus railing with disinfectant Wednesday in Bridgman as area schools districts are ramping up efforts to control the possible spread of illness.

With cases of coronavirus now confirmed in Michigan, superintendents of Berrien County schools remain in planning mode for when the virus hits this region of the state.

Officially known as COVID-19, the World Health Organization declared spread of the virus and resulting disease a pandemic on Wednesday, pointing to the more than 118,000 illnesses in over 110 countries.

Berrien County school districts have not yet resorted to closures. However, several superintendents have been pushing updates to parents and students through newsletters or posts online.

St. Joseph Superintendent Thomas Bruce said his staff has fielded a litany of emails and calls regarding district plans for the coronavirus.

“We have plans in place for the flu and when our student population drops below 70 percent,” Bruce told trustees at Monday’s board meeting. “But we didn’t have something for this until a few weeks ago.”

Bruce said he takes part in a standing meeting every Friday, through Google Hangouts, with other superintendents to share information.

The end result from these conversations among superintendents led to the creation of a pandemic response plan.

“It’s a skeleton plan to give us the opportunity to respond quickly,” Lakeshore Superintendent Phil Freeman said. “But it doesn’t have specific guidelines. There are so many moving parts and it will evolve quickly.”

Freeman said they’ve developed contingencies – which may differ from school to school – for remote learning possibilities in the event that schools close.

He said superintendents began to collaborate on a unified plan about three weeks ago and finalized the format of the plan about a week ago.

Shortly after reports that the first two positive cases of coronavirus had been detected in the state, Gov. Gretchen Whitmer held a news conference Tuesday evening and declared a state of emergency in Michigan.

State health officials said the two Michigan residents who tested positive for the virus are middle-aged adults from Wayne and Oakland counties. Both have been hospitalized.

“We’re trying to keep a level head and remind students to wash their hands,” he said. “It’s really about being smart, continuing what we do and just keeping our line of communication open.”

Several superintendents said they wouldn’t move for a closure without consulting the Berrien County Health Department.

Freeman said his district has remained in contact with the health department as the situation continues to change.

“They are going to be the guiding light for us,” Freeman said. “Again, we prepare the best we can with all the evolving information. Ultimately, we’re making a decision with the health department as we get more.”

Gillian Conrad, communications manager for the Berrien County Health Department, said they are sticking to their guidance, which is written into the public health code.

Conrad said the department would only recommend school closures if there is an “imminent danger.”

She said the ripple effect of school closures can’t be overlooked.

“It is not a decision that would be made lightly,” Conrad said. “There would not be a knee-jerk reaction. One case (of COVID-19) in our area would not necessarily require a closure.”

At the moment, Conrad said the health department is following the U.S. Centers for Disease Control’s lead.

The health department hosted a community partner call Tuesday with residents. Several superintendents were also on the call.

Bridgman Superintendent Shane Peters said his district is focused on ensuring remote opportunities will be available for students, if the district should end up closing temporarily.

“The whole process was creating remote-learning opportunities for students if we had to be gone for ‘X’ amount of days. So, we created a pandemic plan,” Peters said. “We’re not calling it a coronavirus plan because there will probably be another pandemic in our lifetime. It’s broad, but I feel better going to bed knowing we have this in place.”

Bridgman would incorporate remote-learning opportunities through the use of emails, Google Suite products and other computer programs in order for students and teachers to interact.

Peters said he was given an outline of how the school could continue for each class and grade level.

“This is all uncharted waters for us,” Peters said. “My directive was for our staff to look into what remote learning would look like. It’s not a snow day. It would require districts to take an extended amount of time off. And that would cause a disruption for families.”

Not all parents and guardians can work from home if school is canceled. It would require finding day care or possibly taking time off, Peters argued.

Conrad said the tough aspect to remote-learning is that it doesn’t work for every school district. Not every district has the technological capability or resources to do so, she said.

“While some colleges and universities are moving to a virtual setting, it does not mean K-12 schools can also do that,” Conrad said.

Lake Michigan College released a statement Wednesday with the college saying it is working with other area institutions, K-12 partners, the state and county health departments to develop cohesive prevention and response plans.

Over the past month, LMC undertook a college-wide education campaign around the prevention of the illness.

Additional hand-sanitizer stations and anti-viral wipes have been available in all campus buildings.

LMC staff also has been wiping down all surface areas before and after events, and doing extra wipe downs of high-touch areas.

In light of the new cases diagnosed in Michigan, LMC announced all upcoming events planned on its campuses – where groups of 100 or more will be gathering – are being evaluated for risk.

One day after the first cases of coronavirus in Michigan were announced, many of Michigan’s public universities began canceling in-person classes and urging students to return home. Some won’t allow classes until April.

“We are aware that some four-year universities are temporarily transitioning to virtual classes. As a community college, we offer a variety of technical education classes – many of which are not conducive to online learning,” LMC’s statement read. “However, we are working on a plan to mitigate risk while also providing quality education to our students. We will continue to keep our college community informed over the coming days regarding any plans and future possibilities should COVID-19 appear in our area.”

While the semester continues for K-12 schools, Peters said the plan also required his administration to look at upcoming events, such as sporting events and field trips.

“What do we do to keep people safe? We can’t stop living our lives. How do we handle athletics?” Peters said. “The easy stuff is we clean a bit harder than we have in the past.”

Other than cleaning hard surfaces and restrooms, Peters said they recently began cleaning buses at the end of every school day.

The health department is also encouraging schools to discuss what would happen if a student began exhibiting symptoms.

Conrad said having a separate room for sick children to stay in isolation while a parent or guardian picks them up is a wise choice.

“At this point, we are not making any recommendations for mass closures,” Conrad said. “But we are asking them to take a closer look at events that bring large groups of people together.”

How to protect yourself

Health officials recommend all Americans take these steps to prevent the spread of COVID-19 and other infectious diseases: