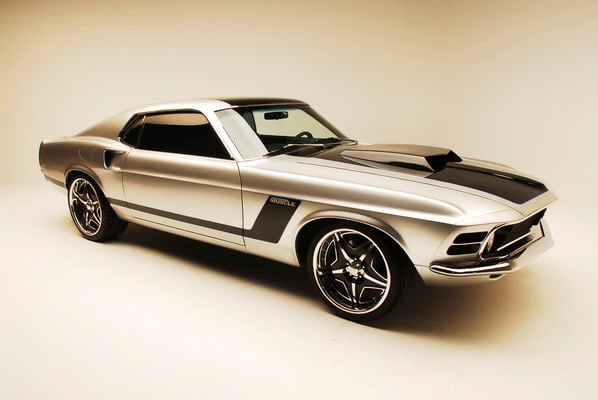 Offered for sale at the The Riyadh Auction/Global Auto Salon in Saudi Arabia was muscle car collector Bill Sefton’s 1969 Ford Mustang Fastback Pro Touring race car. A modern GT500 KR Supercharged V-8 producing 750 horsepower has been seamlessly integrated to a classic Mustang. Despite its power and appeal, it did not sell at the inaugural Middle East auction. 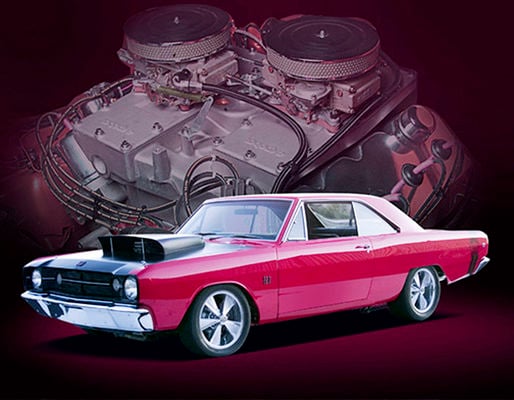 In the glory days of high performance muscle cars, Mr. Norm’s Grand Spaulding Dodge in Chicago was known as High Performance Headquarters. One of Mr. Norm’s most notorious offerings is the 1968 Dodge GSS Dart. It sports a 426/528 Super Street Hemi engine that produces 650 horsepower and is considered a truly magnificent street racer. Car collector Bill Sefton’s GSS Dart was offered for sale at the recent Riyadh, Saudi Arabia auction, but did not find a buyer. Mr. Norm remains active to this day with his high performance vehicles.

Offered for sale at the The Riyadh Auction/Global Auto Salon in Saudi Arabia was muscle car collector Bill Sefton’s 1969 Ford Mustang Fastback Pro Touring race car. A modern GT500 KR Supercharged V-8 producing 750 horsepower has been seamlessly integrated to a classic Mustang. Despite its power and appeal, it did not sell at the inaugural Middle East auction.

In the glory days of high performance muscle cars, Mr. Norm’s Grand Spaulding Dodge in Chicago was known as High Performance Headquarters. One of Mr. Norm’s most notorious offerings is the 1968 Dodge GSS Dart. It sports a 426/528 Super Street Hemi engine that produces 650 horsepower and is considered a truly magnificent street racer. Car collector Bill Sefton’s GSS Dart was offered for sale at the recent Riyadh, Saudi Arabia auction, but did not find a buyer. Mr. Norm remains active to this day with his high performance vehicles.

Dear readers: Have you ever put on a party and almost no one showed up? If yes, the good folks at Worldwide Auctioneers in Auburn, Ind. knows what it feels like as well. It seems that organizers in the Kingdom of Saudi Arabia in western Asia decided to put on a show-stopping car festival including an auction and a salon in their country and Worldwide Auctioneers were invited to oversee the event. The apparent goal of the government-sponsored event was to create a fabulous new automotive auction and festival that would eventually become the world’s most exclusive affair – an annual venue not to be missed. It’s an interesting tale.

Readers may recall my June 30 interview earlier this summer with performance car enthusiast and collector Bill Sefton. Bill is presently enjoying 70 degree weather in Arizona, but he spends his summers in Bridgman. To refresh reader’s memory, Bill is the guy who 1) once owned 200 muscle cars, 2) presently owns a 2018 Dodge Challenger Hellcat and 2019 Corvette Z06 as his daily drivers, and he is the co-founder of the recently held 11th anniversary Muscle Car and Corvette Nationals event outside Chicago. I brought Bill Sefton into this story because he is the one who made me aware of the Riyadh automotive event that was held Nov. 23 in Saudi Arabia. He, being a muscle car collector, decided to participate in the auction by submitting five of his 20 remaining performance/muscle cars. His cars, all with superb quality and provenance, were all accepted. The five submitted and accepted were a 1971 Dodge Demon Custom Pro-Touring, 1971 Dodge Super Stock Demon Hardtop, 1969 Ford Mustang Fastback Custom Pro-Touring, 2011 Dodge Drag Pak V-10 Challenger Hardtop and 1968 Dodge Mr. Norm’s GSS Hemi Dart.

I found it tremendously interesting hearing from Bill about how the Saudis went about putting on this inaugural festival. With a budget where money was no object, the organizers decided to invite from around the world the finest vintage automobiles. The Riyadh Auction/Global Auto Salon (official name) featured 120 vehicles in the live auction, and in the salon portion (think car corral at the Hershey Fall Meet) over 330 vehicles were invited. All of the cars in the Salon had set prices posted. The vehicles selected from the submissions included a diverse and unique line-up of classic, pre-war, American muscle, custom, modified, off-road and supercars. I scanned the broad range of 120 vehicles available on the auction list and it included everything from a modified 1955 Chevy Two Ten post sedan to a 1938 Bugatti Type 57C Coupe. Like Bill’s five entries, most of the vehicles were high performance cars and many were modified to a high degree. Besides the Two Ten the Type 57C, I also spotted such beauties as a 1932 Alfa Romeo 8C 2600 Monza, 2006 Ford GT Heritage Edition, 1938 Bentley 4 ¼ Litre Boattail Speedster, 2003 Ferrari Enzo, and even a 1952 custom Chevy 3100 pickup, to name just a very few.

The week before the festival Bill emailed me with an update and recommended that I watch the auction as it was to be streamed live on the Worldwide Auctioneers website. Luckily it was scheduled for 8 on Saturday morning. I didn’t have to get up in the middle of the night to watch. As it turned out getting up a little early on Saturday was a waste of time. It seems that a problem prevented the auction from being broadcasted live. Sadly, it was a harbinger of things to come. A couple of days after the auction Bill sent me an email with these words, “Well, the Saudi car auction was a disaster.” As it turned out, according to Bill, of the 450 vehicles available for sale, only 12 vehicles were sold; four in the auction and eight in the salon. It seems, as Bill described it to me, that Arabs don’t like to bid against each other. Added Bill: “Most of the wealthy Saudis are related to each other.” There is also a deeply established hierarchy in the country. Those Saudis clinging on the lower branches of the hierarchy tree dare not bid against higher up relatives.

Permit me to put into perspective the scope of this apparent financial debacle by sharing what it cost the Saudis to transport Bill’s five performance cars to Riyadh. The Saudis made it very clear that they would pay all transportation expenses to the owners around the world who had their vehicles accepted for the show. In addition to paying all shipping costs (crating, insurance, the whole works) from Bill’s garage in Chicago, they also paid Bill $10,000 per car (note: that’s per car) just to have the vehicles in the event. Wait, there’s more. They also offered to pay all his expenses for flying to Saudi Arabia to attend the event. He chose not to attend (it was the same weekend as his MCACN event in Illinois) but friends of Bill’s who also had cars accepted did make the trip and they offered to look after his cars. Neither Bill’s nor his friend’s sold any of their cars. The Saudi organizers are making return shipping arrangements for the unsold vehicles, again at their expense. Bill expects them back in his garage in January or February.

The festival included more activities than just the auction and salon sale. Visitors also had access to hundreds of exhibitors showcasing their brands and newest automotive products. Also, dozens of industry experts and celebrities were invited to attend, presumably with all travel, food and hotel expenses paid. Among the celebrities were Chip Foose and Dave Kindig (both have auto-themed TV shows on MotorTrend Network), Bill Goldberg (of World Wrestling Entertainment fame) and Emerson Fittipaldi (Formula One and Indy 500 race driver) to mention only four. Bill thought that portions of the event went pretty well from what he heard from his friends and press reports. Curious, I asked Bill if the Saudis invited him and some of his cars again to the auction, would he participate. “Yes I would,” he quickly replied. He added, “I expect by next year they will resolve the few-cars-sold issues.” Then Bill raised the question, “Besides, who would turn down a $10,000 per car incentive for participating? Not me.”

The price tag may never be known but if you do the math, 450 X $10,000 ($4.5 million) is a lot of cash, and that doesn’t even include the cost of covering all the vehicle shipping costs and owner’s expenses in traveling for the event. And it also can be assumed that all the vendors and celebrities were offered no-cost incentives as well. I see a big number with lots of zeros after it. It must have been quite an event and I’m sure the folks who attended had a grand time. Now it remains to be seen if there will be a second Riyadh Auction/Global Auto Salon event. Maybe we should all mark the weekend before Thanksgiving on our 2020 calendar and plan to attend.

Side note: Bill also shared another interesting story. Corine Tichenor, 93, of St. Joseph read my June 30th car column and recalled that 65 years ago she lived next door to a family named Sefton, and they had a 3-year-old toddler named Bill. She wondered if it could be the same family. It turns out it was. She and Bill had a wonderful reunion at her home. Bill commented that Corine is still sharp as a tack and a delight to visit with.

• Trivia answer: The 1967 Dodge Dart and Plymouth Valiant compacts were all-new, but model availability changed. The Dart, as usual, was offered with two and four-door sedans, a hardtop and a convertible. The Valiant was offered only as sedans because its similar sibling Barracuda was given the sportier convertible and hardtop models. It made no marketing sense to have both the Valiant and Barracuda selling competing models.

Dar Davis founded the Lake Bluff Concours and chaired the event for many years. He has been writing this column since 1999. He can be reached at drd43@sbcglobal.net.

Why did the 1968 Dodge Dart offer a hardtop and convertible and its similar sibling Plymouth Valiant did not?

The answer at the end of today's column.