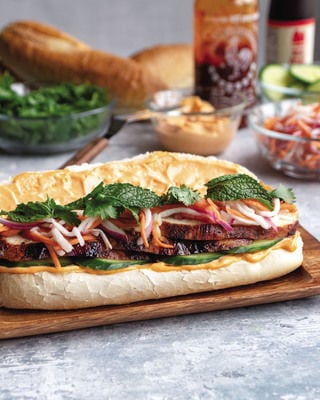 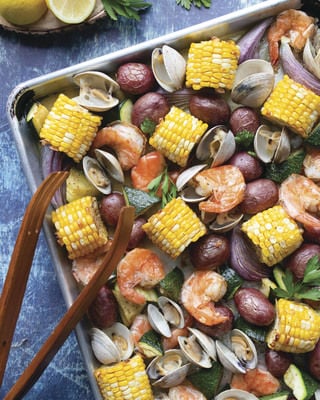 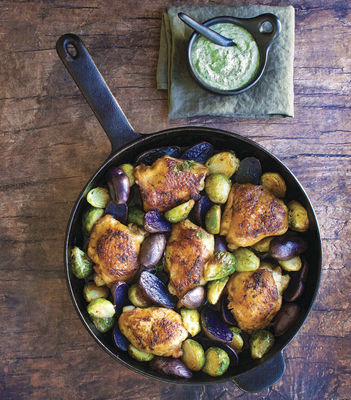 Peruvian Chicken with Ají Verde is a recipie touted by "Hero Dinners: Complete One-Pan Meals That Save Day" by Marge Perry and David Bonom, as easy to prepare, nutritious, well-balanced and delicious, using just one sheet pan or skillet.

“Hero Dinners: Complete One-Pan Meals That Save Day” by Marge Perry and David Bonom offers a variety of recipes making it easy to prepare a nutritious, well-balanced and delicious meal using just one sheet pan or skillet.

Recipe developers for magazines and major food companies, the two would spend all day working with food.

“The day would end and we would have nothing to eat even though we cooked all day,” says Perry. “I started creating these meals that were sort of up to our palates that we could make in either one sheet pan or one skillet.”

The requirement for hero dinners were simple and called for three things: using a pan or skillet, including a protein, vegetable, and a starch and using ingredients that are natural or minimally processed.

With these dinners, says Perry, there are two heroes. No. 1: the meals, because they save the day.

“Also you’re the hero for being able to make dinner, sit down, relax and enjoy it and not have to face a sink full of dinner dishes,” she says.

Combine the soy sauce, sugar, garlic powder, chipotle powder, thyme, and ½ teaspoon of the salt in a small bowl to form a paste. Rub the mixture all over the chicken to coat.

Combine the potatoes, Brussels sprouts, and 1 tablespoon of the oil in a large bowl. Toss with the remaining ½ teaspoon salt.

Heat the remaining 1 tablespoon oil in a large ovenproof skillet over medium heat. Add the chicken, skin side down, and cook until well browned, about 4 minutes. Remove the chicken from the skillet and add the potatoes and Brussels sprouts. Place the chicken, skin side up, on top of the vegetables and pour in the broth; cook for 2 minutes. Transfer to the oven and roast until the vegetables are tender and an instant-read thermometer inserted into the center of the largest piece of chicken registers 170°F, 23 to 25 minutes.

1 small daikon radish, peeled and cut into matchsticks (about 1 cup)

Make the quick pickled vegetables: Combine the vinegar, sugar, and salt in a medium bowl; stir until the sugar dissolves. Add the carrots, daikon, and onion; let it stand at room temperature, giving it a stir now and then, for 30 minutes.

Combine the fish sauce, 1 tablespoon of the sriracha, salt, and pepper in a bowl; add the chicken and toss well. Let it stand at room temperature for 10 minutes.

Combine the remaining 1 tablespoon sriracha and the mayonnaise in a small bowl.

Meanwhile, place the rolls in the oven directly on the oven rack and toast for 5 minutes.

Medium red onion, cut through the root end into 8 wedges

3 ears of corn, husked, each cut into 4 pieces

Combine the potatoes, onion, and 1 tablespoon of the oil in a large bowl. Toss with ½ teaspoon of the Old Bay seasoning. Transfer to the sheet pan and roast for 10 minutes.

Meanwhile, toss the shrimp, corn, zucchini, and remaining 1 tablespoon oil in the same bowl. Stir in the remaining ½ teaspoon Old Bay seasoning, the salt, and pepper.

Add the shrimp to the sheet pan along with the clams. Top with the diced butter. Roast until the vegetables are tender, the clams have opened, and the shrimp are cooked through, 17 to 18 minutes. Discard any clams that have not opened.

Jane Ammeson can be contacted via email at janeammeson@gmail.com or by writing to Focus, The Herald-Palladium, P.O. Box 128, St. Joseph, MI 49085.