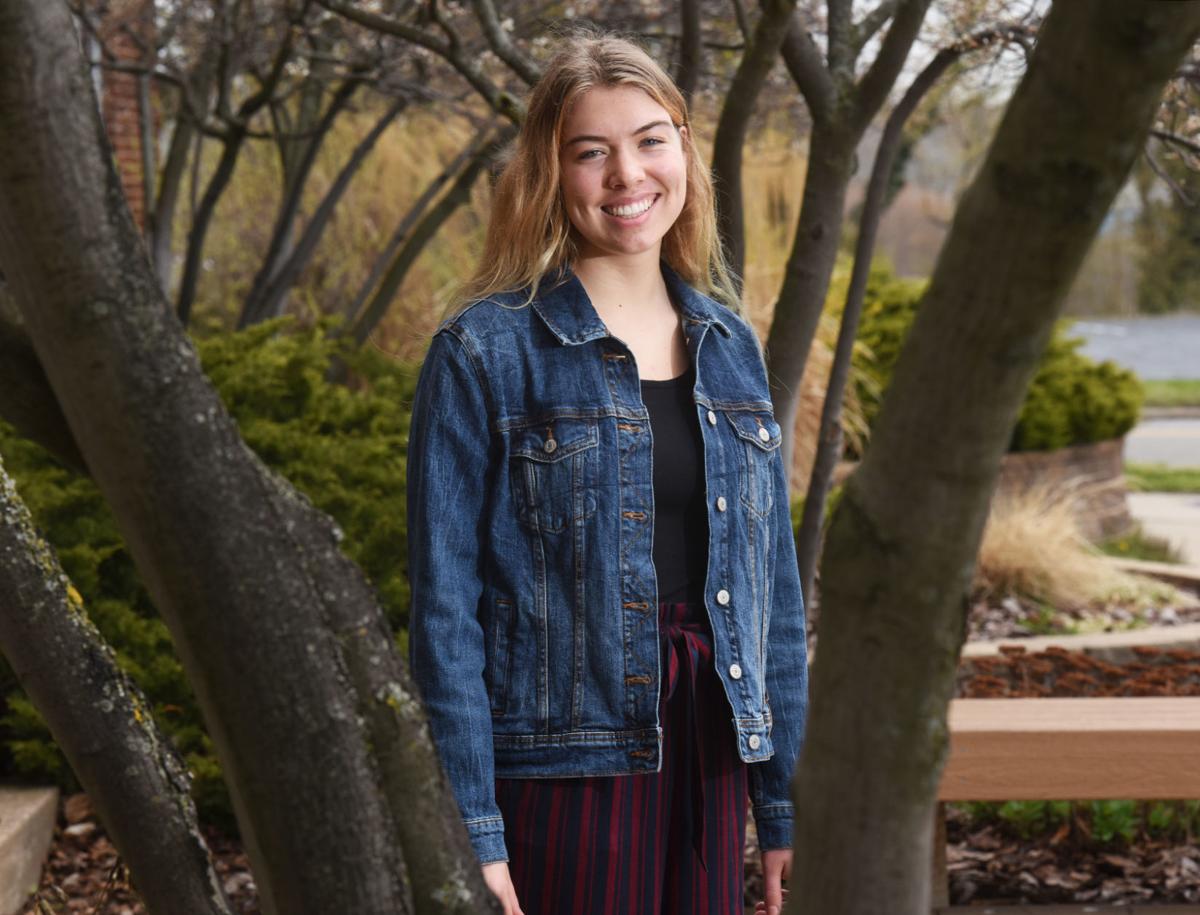 Melanie Kibler, a senior at Lake Michigan Catholic High School, plans to join the U.S. Coast Guard next fall. Kibler is part of the class of 2020, which is winding up high school like no other class in history. 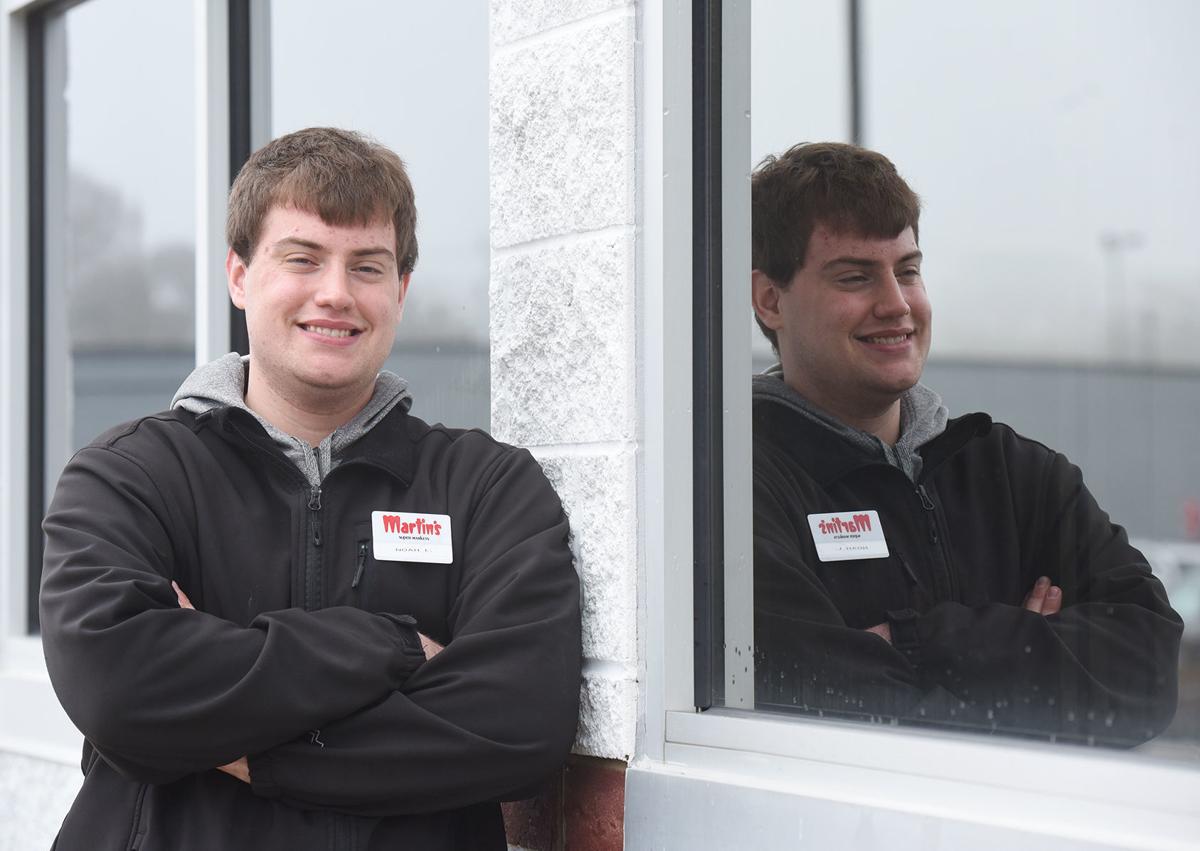 Noah Lyon, a senior at Lakeshore High School, works a shift Wednesday at the Martin’s store in St. Joseph. He is happy to stay busy, and says he can usually still see people smiling behind their masks.

Melanie Kibler, a senior at Lake Michigan Catholic High School, plans to join the U.S. Coast Guard next fall. Kibler is part of the class of 2020, which is winding up high school like no other class in history.

Noah Lyon, a senior at Lakeshore High School, works a shift Wednesday at the Martin’s store in St. Joseph. He is happy to stay busy, and says he can usually still see people smiling behind their masks.

ST. JOSEPH — Melanie Kibler has enlisted in the U.S. Coast Guard and is headed off to boot camp Sept. 15.

But her final weeks of high school are unlike anything she could have imagined.

“It’s a real bummer for us not being with our friends before we all go our separate ways,” she said.

Kibler, 18, of Berrien Springs, is a senior at Lake Michigan Catholic High School in St. Joseph.

“I was in track and field. It’s hard. I had just gotten good at hurdling,” she said. She also is a swimmer.

Graduating seniors everywhere are missing out on concerts, graduation ceremonies, proms, springs sports, and other extra-curricular activities due to the COVID-19 pandemic and state-ordered restrictions. Sad, disappointing and unreal are words they are using to describe how that feels.

Some schools will try to hold proms and graduation ceremonies at some point, but students say they don’t know what that will look like.

And some events that have been canceled cannot be made up.

“I am in Interact Club. Every year we go to the Dominican Republic to build houses. This was scheduled for June, and it would have been my final year going” Kibler said. “I have made some friends there. I understand, but it’s still disappointing.”

Another special event she and her Catholic classmates will miss out on is a special Mass celebrated by the bishop, to honor the graduating seniors and their accomplishments.

Kayla Arend, 17, a senior at Eau Claire High School, is missing her friends. But she’s missed out on more than that. She is Miss Eau Claire-Sodus 2020, and so far is missing out on the annual Miss Blossomtime Pageant, which for now has been postponed, along with the Blessing of the Blossoms, Grand Floral Parade, which were canceled. But, she says, she is trying to keep things in perspective.

“There are so many issues other people have that I don’t have to endure,” she said. “I am upset, but I understand. The reason for all this is greater than what I can see at the moment.”

Arend was a junior coach for Girls On The Run, a program that helps girls build self-confidence through running and social skills. The girls in the program work toward a 5K run that is usually held in May.

Arend plans to major in psychology at the University of Michigan, and was to leave for Ann Arbor for the summer term, which she now will take part in online, from home.

The Blossomtime Grand Floral Parade would also have been special to Dylan Tucker, 18, a senior at Watervliet High School. He is Mr. Watervliet 2020.

“The parade would have been fun. There are other things, too. We kings and queens were so excited about going into the elementary schools and reading to kids,” he said. “We have read some stories and posted them on Facebook.”

Tucker had played baseball throughout high school and was excited about his final season, which ended after just two practices.

“That was a huge disappointment,” he said.

He’s keeping up with his friends through social media and said a group previously met at Van Buren State Park for a walk.

Tucker plans to attend Lake Michigan College or Southwestern Michigan College, then transfer to the University of Central Florida. His goal is to become a doctor of radiology.

His words of encouragement for other high school seniors:

“Stay strong, and know that there’s a brighter future ahead.”

Noah Lyon, 18, is a senior at Lakeshore High School. He was starting his first season of track and field.

“I was really looking forward to it. We had just one week of practice and no meets. Everything we’ve looked forward to has been ruined,” he said. “It’s pretty sad, knowing you’re not going to see all your friends, missing out on sports and things. The baseball players weren’t even able to start their season.”

Lyon is fortunate that he still gets to see his girlfriend. He works at Martin’s in St. Joseph, and so does she.

“We’re required to wear masks now, so it’s hard to tell people’s emotions. But you can usually tell when they’re smiling by their eyes,” he said.

Clare Berghaus, 18, of St. Joseph, is a senior at Michigan Lutheran High School. She had played junior varsity girls basketball for two years and was in her second year on the varsity, which was unable to finish the season. She said the team is keeping in contact through an internet application, Zoom.

“I think there are so many lost things. Even the small things like sitting in study hall,” she said. “Things we all took for granted.”

Then there’s the big things.

“We missed out on our senior class trip to Washington, D.C., and we’d been fundraising for three years. We’d put so much time and effort into it,” she said. “Senior year is supposed to be a huge thing. All your hard work comes to fruition.”

Berghaus was in the band and choir.

“We missed out on the Spring Sacred Concert and the Prism Concert. That is a fun concert with solos, and it’s open to the whole school to participate,” she said.

She also was involved in the Bridge Competition through the Michigan Department of Transportation, which has now been canceled.

“They send you kits and you build a bridge. My friends and I did this for three years. We had a proposal turned in for this year,” she said.

Berghaus said she has been able to relieve some of her own sadness by helping others.

“I’ve been able to volunteer a lot with my church, Trinity Lutheran Church in St. Joseph. We help out at the Soup Kitchen and we have a mobile food truck,” she said. “We’ve been making 144 bag lunches once a month.”

Berghaus plans to attend Hillsdale College in the fall. She’s not sure of her major, but said possibly music and bio-chemistry.

“I might want to be a pharmacist,” she said.

“Zeke” Furst, 18, is a senior at Buchanan High School. He plays the saxophone and said this would have been his fifth year marching in the Blossomtime Grand Floral Parade.

He also is sad that History Club activities and track and field season were cut short.

“I’ve been waiting for all this. I loved History Club and this would have been my last year of track,” he said.

He said he wasn’t so much looking forward to the graduation ceremony, but as a member of the band he’s played the seemingly endless “Pomp & Circumstance” for the past four years as the graduating seniors walked.

“I was actually looking forward to not playing ‘Pomp & Circumstance’,” he said. “But I was looking forward to playing our senior song. It’s a tradition that we play one of the songs we’d previously played during a concert in high school.”

Furst said he misses his friends but he is getting out some because he works at McDonald’s.

“I’m glad I’ve continued to work. It will help pay for college,” he said. He plans to attend Great Lakes Christian College in Lansing.

Furst said he is not upset about the senior prom being canceled.

“I was only going to go so my mom would be happy,” he joked.