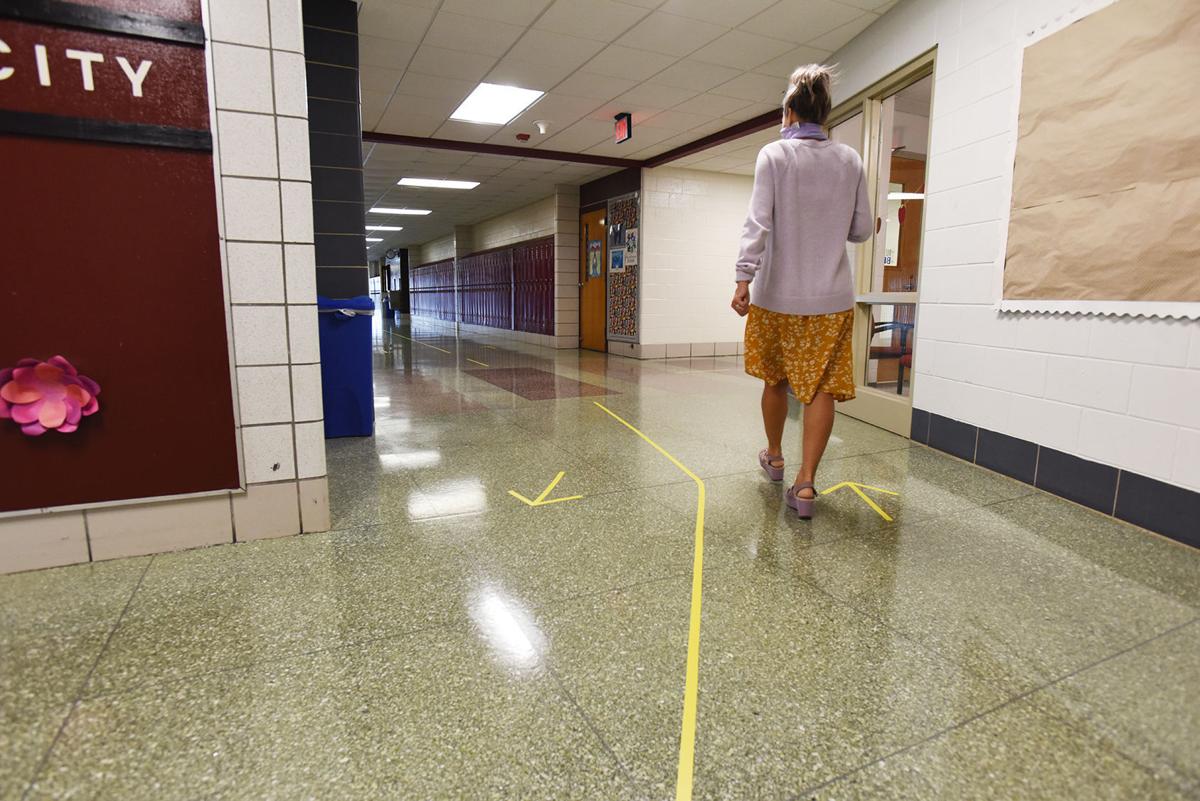 In preparation for the start of the school year, staff at Watervliet High School have introduced a number of safety precautions to help prevent the spread of COVID-19, such as the placement of directional traffic arrows along hallways. 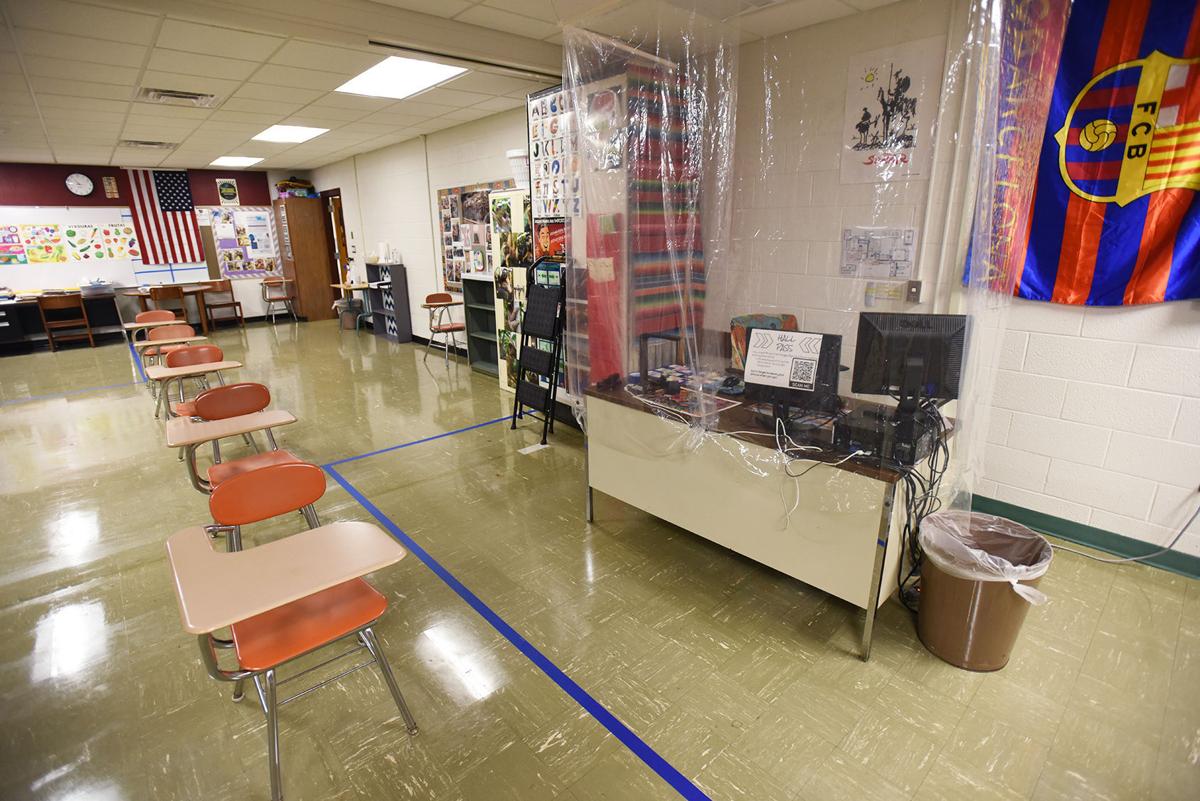 Some Watervliet teachers are taking extra precautions to prevent the spread of COVID-19, like installing plastic barriers around their desks. 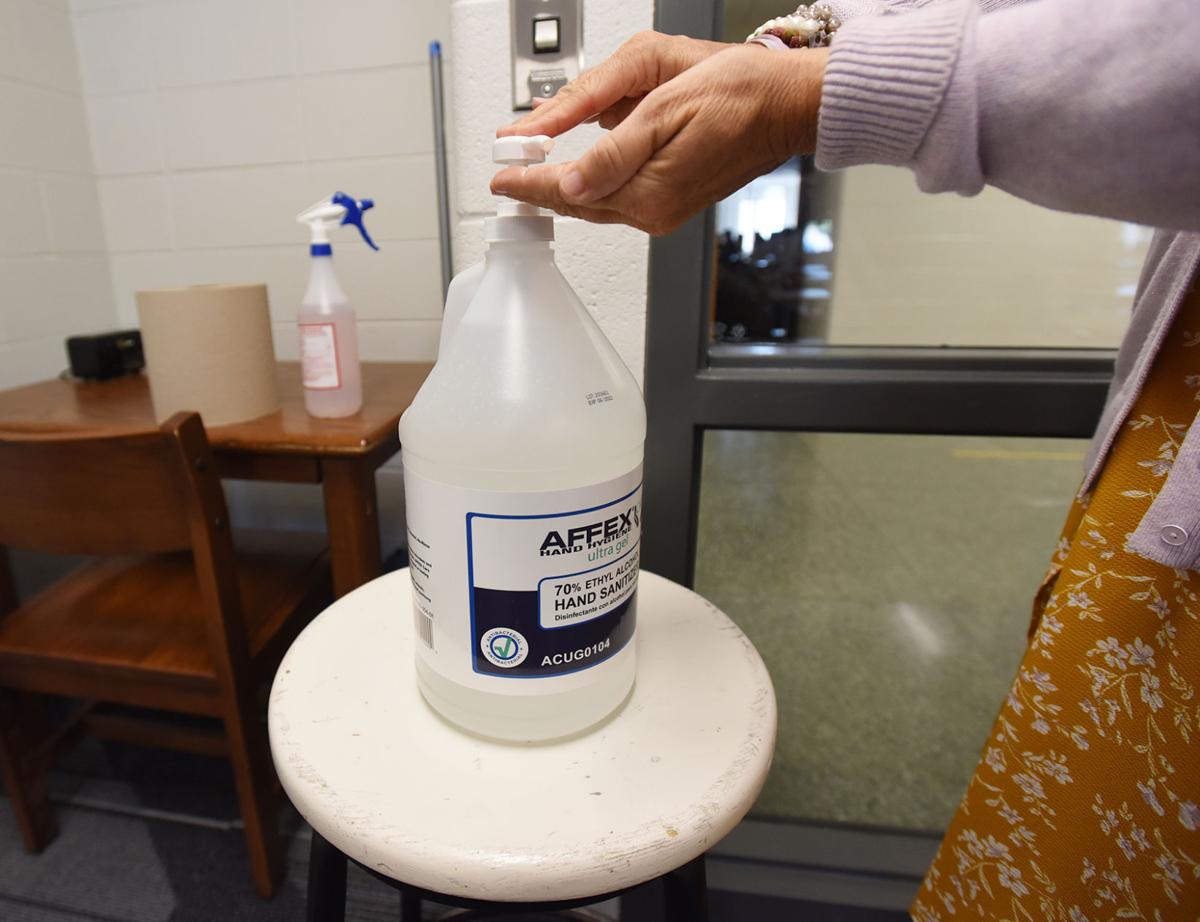 Hand sanitizer will be placed in each classroom for student and faculty use at Watervliet High School. 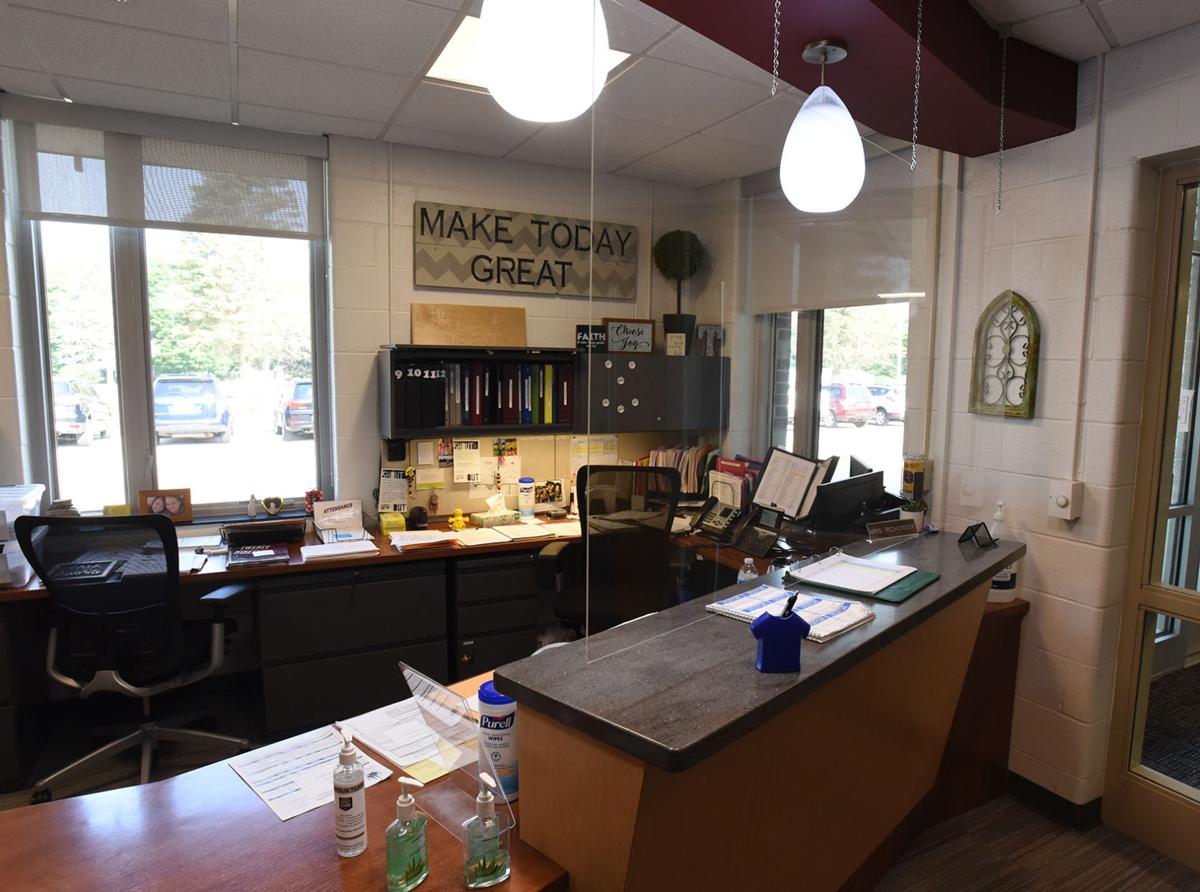 Plastic barriers have been installed in the front office at Watervliet High School to protect both students and staff from COVID-19 during the start of the new school year. 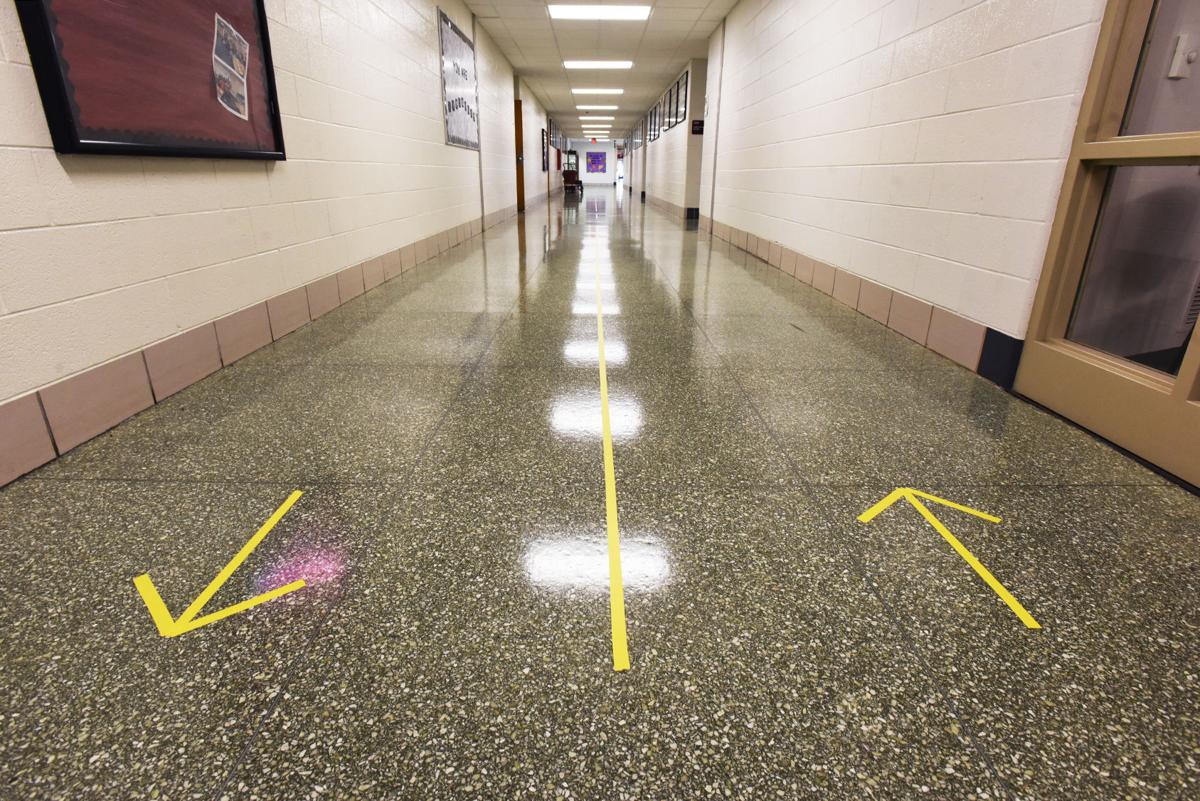 Directional traffic arrows have been placed along hallways at Watervliet High School in preparation for the start of this most unusual school year.

In preparation for the start of the school year, staff at Watervliet High School have introduced a number of safety precautions to help prevent the spread of COVID-19, such as the placement of directional traffic arrows along hallways.

Some Watervliet teachers are taking extra precautions to prevent the spread of COVID-19, like installing plastic barriers around their desks.

Hand sanitizer will be placed in each classroom for student and faculty use at Watervliet High School.

Plastic barriers have been installed in the front office at Watervliet High School to protect both students and staff from COVID-19 during the start of the new school year.

Directional traffic arrows have been placed along hallways at Watervliet High School in preparation for the start of this most unusual school year.

As most students begin returning to school this week under a cloud of uncertainty, area education leaders have a growing optimism that has been fueled by a summer of planning, collaborating and the joy of the classroom.

“Crisis has a way of either crushing you or bringing out your best,” Ric Seager, Watervliet Public Schools superintendent, said last week. “What I’ve seen so far from the way our staff, administrators and families have responded, I’m really thinking that we’re going to enjoy the latter.”

The COVID-19 pandemic has completely reshaped how the new school year will look. Staggered first days of school, mask requirements, and lines and arrows on the floor in the hallways will be just part of what students will have to get used to this year.

Coloma Community Schools Superintendent Dave Ehlers said this will just be the new normal for kindergartners starting this school year in person.

“It’s more of the first- and second-graders that are going to know this is different and we will have to provide some comfort to them,” he said. “But kids adapt. In a couple of weeks, they’ll have the hang of this.”

And that’s the hope too of other school leaders, like Lakeshore Public Schools Superintendent Phil Freeman.

“We practiced a lot of patience and grace over the last several months and getting started in the new school year,” he said. “I think we’re going to need to continue to practice some of that patience and grace as we learn the new protocols and implement new plans to support our students in terms of safety and learning. We’ll get there, but we have to be patient.”

The pandemic has created a situation in which school staff have been forced to become first responders.

“What we’re asking of our teachers in this time is unprecedented,” Seager said. “We’re asking the same of them as we are of front-line health care workers that are working in ERs. We’re asking them to put themselves, to some degree, in harm’s way in a way we’ve never asked them to before.”

Berrien Springs Public Schools Superintendent David Eichberg said framing the message about going back to in-person instruction during a pandemic has been tricky for him.

He said he was addressing a group of people recently about going back to in-person learning when he got interrupted by someone saying, “it’s easy for you to say these things when you don’t have children in school.”

He said all these back-to-school plans have been created while thinking about the safety of students, teachers, parents and school staff.

A group of area superintendents met every single day over the summer to discuss how to make their back-to-school plans cohesive. Ehlers said that collaboration helped him get through the summer.

“It made it a much easier task than sitting here by myself,” he said.

Freeman said what made coming up with back-to-school plans extra tough was the various guidance that schools received.

“While helpful, it all changed on a daily basis,” he said. “In my email, each day, I would receive six to 10 new guidance documents. Some of them covered the same things, or were interpretations of other things, but it was a shifting landscape constantly.”

Seager said in his 30 years in education, he’s never had to do anything as hard as coming up with a back-to-school plan during a pandemic.

“I’ve worked in high-risk school districts where we were challenged with getting programs up and running over the summer and implementing million-dollar grant programs, and this has been the most challenging, stressful thing,” he said. “I’ve seen a lot of stuff in education, but I’ve never seen anything like this before.”

Seager noted that he did not get a vacation this summer.

“There was no time to waste,” he said. “But I feel very good about what we’ve accomplished this summer and feel very strongly that we’re doing the best for the kids in our community. At the end of the day, we have to do whatever it takes. That’s what matters.”

“It’s been a lot of work, but emotionally I feel good about coming back, but I know not everyone feels that way. We’re going to open school because we think that’s what is best. The health department thinks that’s what’s best. We’re doing what we have to do,” he said.

Ehlers said he’s been preaching to his teachers: “As long as we let the pandemic, and the things we have to do to be safe, be the story of what we’re doing, we’re not going to focus on education.”

“So we need to get in, figure this out within a couple weeks, then get on to learning,” he said.

“We’re going into the year with a little bit of apprehension, but we are also looking at it in a very optimistic way,” he said. “If we can work together to implement all of our plans, I think we can make it work for everybody – for our staff, our students and our community.”

Seager said he thinks the education system will be stronger going forward, after having to go through this.

“I know this is difficult. In some ways, what we’re asking schools to do now is just, on its face, almost absurd. But it’s bringing out this steel in our character in a way that has just been very impressive to me,” he said. “Our teachers will be stronger, more flexible and adaptable teachers and our kids will become better, more independent and adaptable learners as a result of this.”

Eichberg said getting back to school for him has been about creating an environment where students and teachers can just have the joy of being together and learning again.

“There’s real joy in that, and they’ve been deprived of that joy for over five months,” he said. “People need people. It’s making sure we can create something really joyful and fulfilling for staff and students, and parents have a comfort level that it’s all being done with the health, safety and well-being of their students in mind.”

This week, Berrien County Health Department officials shared with The Herald-Palladium some …

How Southwest Michigan schools will return to learning

In March, the COVID-19 pandemic abruptly and completely ended in-person instruction for the remainder of the 2019-20 school year.