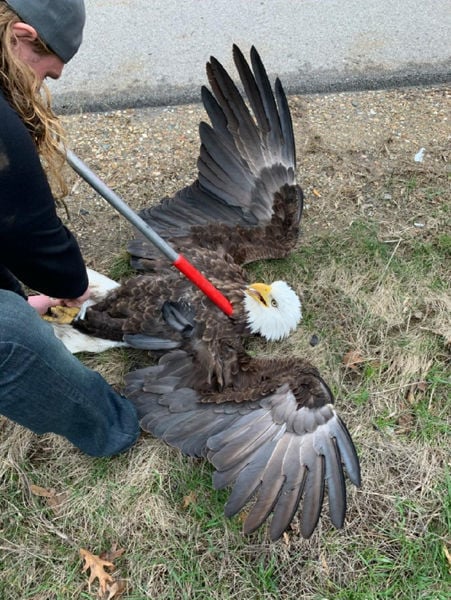 Mark O’Donnell from Michiana Wildlife Trapping in LaPorte, Ind., captures an injured bald eagle along I-94 Saturday that was possibly hit by a vehicle. The bald eagle was found in the median near milemarker 20 in Lincoln Township. 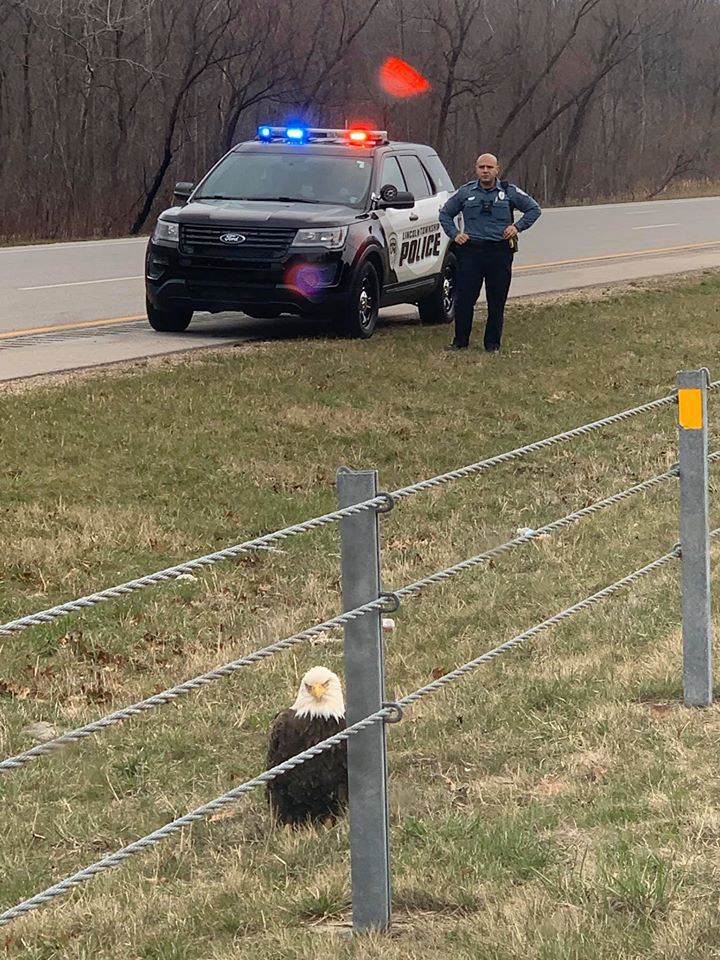 Lincoln Township police officer Jean Vicario watches over an injured bald eagle Saturday afternoon as he waits for help to capture the bird.

Mark O’Donnell from Michiana Wildlife Trapping in LaPorte, Ind., captures an injured bald eagle along I-94 Saturday that was possibly hit by a vehicle. The bald eagle was found in the median near milemarker 20 in Lincoln Township.

Lincoln Township police officer Jean Vicario watches over an injured bald eagle Saturday afternoon as he waits for help to capture the bird.

STEVENSVILLE — A Lincoln Township police officer got up close and personal with a bald eagle Saturday as he helped save the injured bird.

“It was cool to see up close,” Officer Jean Vicario said. “It is definitely something that I’ll remember. ... You usually see them from far away. When you’re up that close, you realize how big they are.”

A picture of Vicario and the bald eagle posted on the police department’s Facebook page had almost 2,000 reactions and over 1,400 shares in less than 24 hours.

Vicario said he got the call around 5 p.m. that an injured bald eagle was in the median of I-94 near mile marker 20. At first, he said he and another officer approached the bird from opposite sides, hoping it would fly away.

“I got within five feet of it, but it wouldn’t move,” he said.

Vicario said the nearest DNR officer was an hour away and couldn’t come until a rehabilitation center was found to take the bird to.

O’Donnell said he was on I-94 traveling to a job in Benton Harbor when he came upon the scene.

“I saw what was happening in the middle of I-94, and I had all the tools in my vehicle so I knew I could detain that eagle for the cop, so I just offered my services,” he said. “It was pretty intense. That bird had so much power it was unreal.”

He said the bald eagle was dazed when he arrived. He said it didn’t appear that any bones were broken, but the bird had injuries on the left side of his body and a serious-looking injury to his left eye.

“I felt like it was my duty to stop and help them cops,” he said. “... The (bald) eagle is the national symbol of our country.”

He said he used a catch pole that is used to catch dogs. But instead of putting the trapline around the eagle’s neck, he put it around the wings.

He then flipped the bird onto its back, zip-tied the legs together and put a sweater over its eyes.

But getting to that point was a struggle.

“The bird was out of it until I put that catch pole onto him,” he said. “And then he came to life. I mean, he fought me tooth and nail.”

He said the eagle’s feet were the same size as his hands and had talons longer than his fingers.

“Them talons were insane,” he said. “He got a hold of my left pointer finger and it was like he was crushing it in a vice. It took everything I had to pull that talon off to get my finger out of there. ... If he had gotten a hold of my whole hand, I probably would have lost it.”

He said the skin on his finger was slightly broken and it was swollen Sunday, “but nothing that I had to go to the hospital with.”

Once the bird was trapped, he said he put it in the back of Vicario’s car. He said he didn’t know if the bird was male or female.

Vicario said he was grateful for O’Donnell’s help. He said he was watching the bald eagle for about 30 minutes before O’Donnell arrived.

“He did a good job securing it, and covered it so it was calm,” Vicario said.

He said he met the DNR officer at the Coloma exit. He said he’s uncertain which rehabilitation facility the bald eagle was taken to, but he hopes to find out so he can keep tabs on how the bird is doing.