You are the owner of this article.
Edit Article Add New Article
You have permission to edit this article.
Edit
Home
News
Features
Opinion
Sports
Obituaries
Archives
e-Edition
Subscribe
Photo Reprints
Classifieds
How Do I?
1 of 6 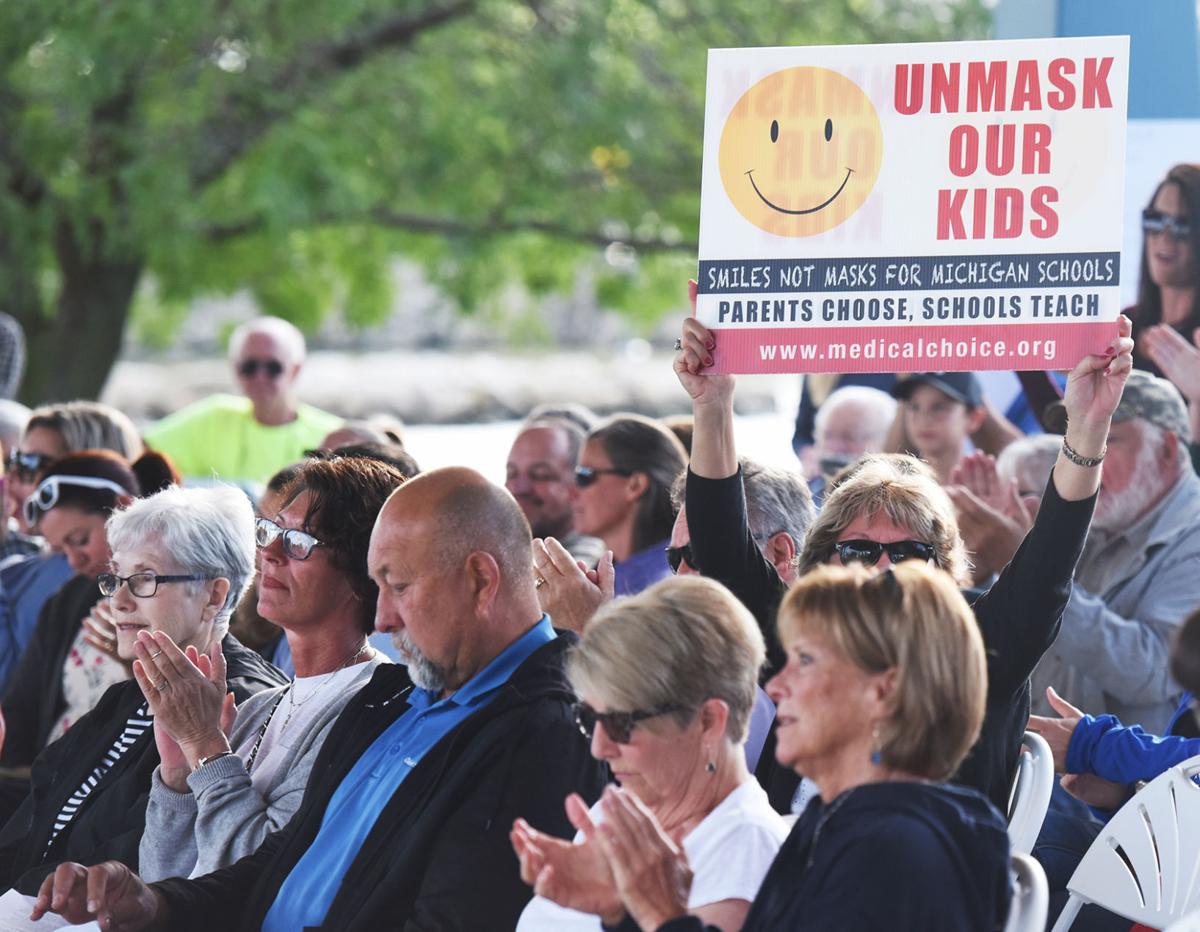 A large crowd gathers on the morning of Sept. 9 at the Shadowland Pavilion in St. Joseph as the Berrien County Board of Commissioners addressed the recent mask mandate at schools. 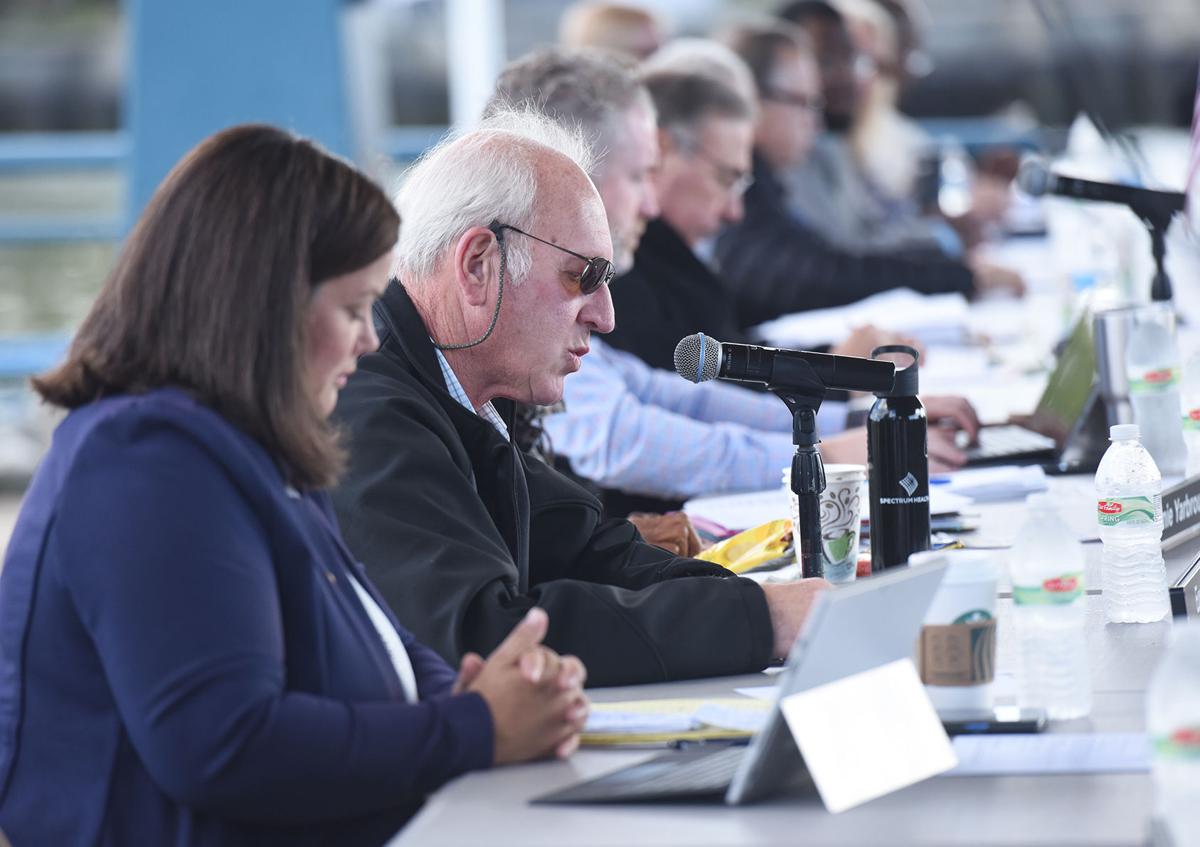 Commissioners Teri Freehling and Ezra Scott (from left) join the Berrien County Board of Commissioners as they hold a Sept. 9 meeting at the Shadowland Pavilion in St. Joseph. 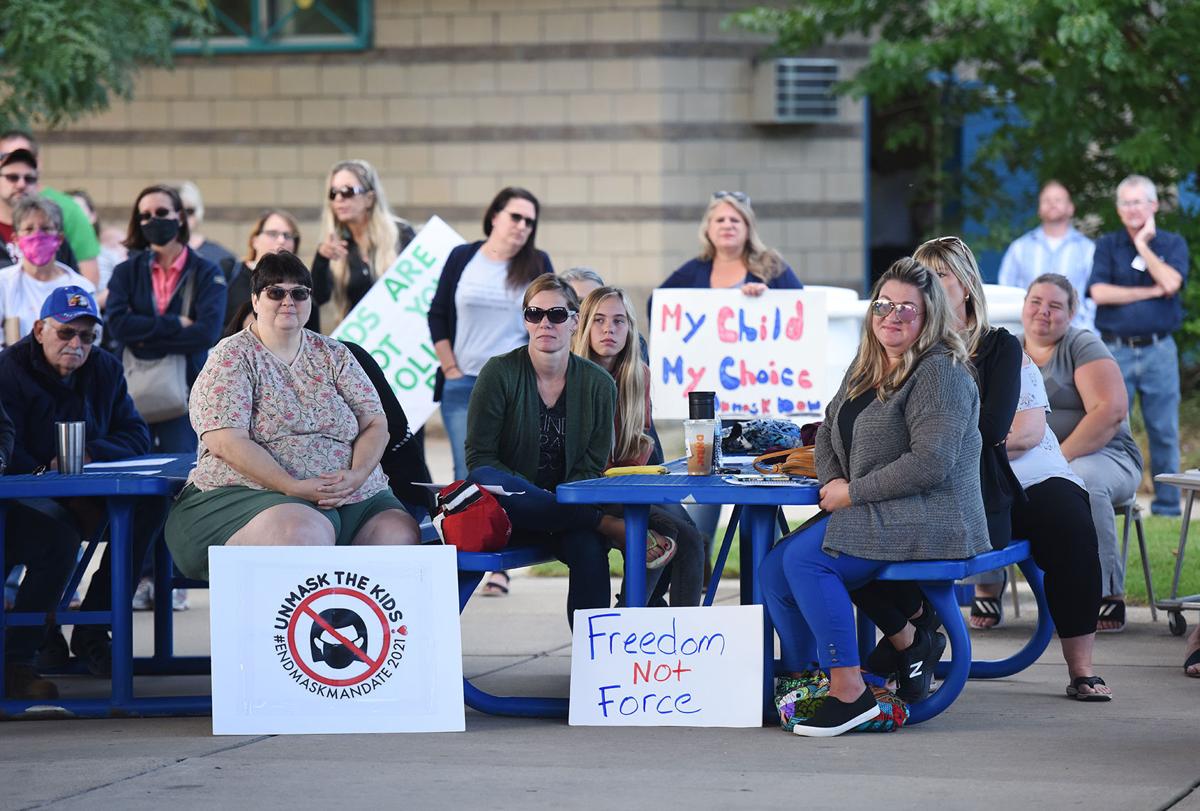 Dozens of people attend the Sept. 9 Berrien County Board of Commissioners meeting at the Shadowland Pavilion in St. Joseph. 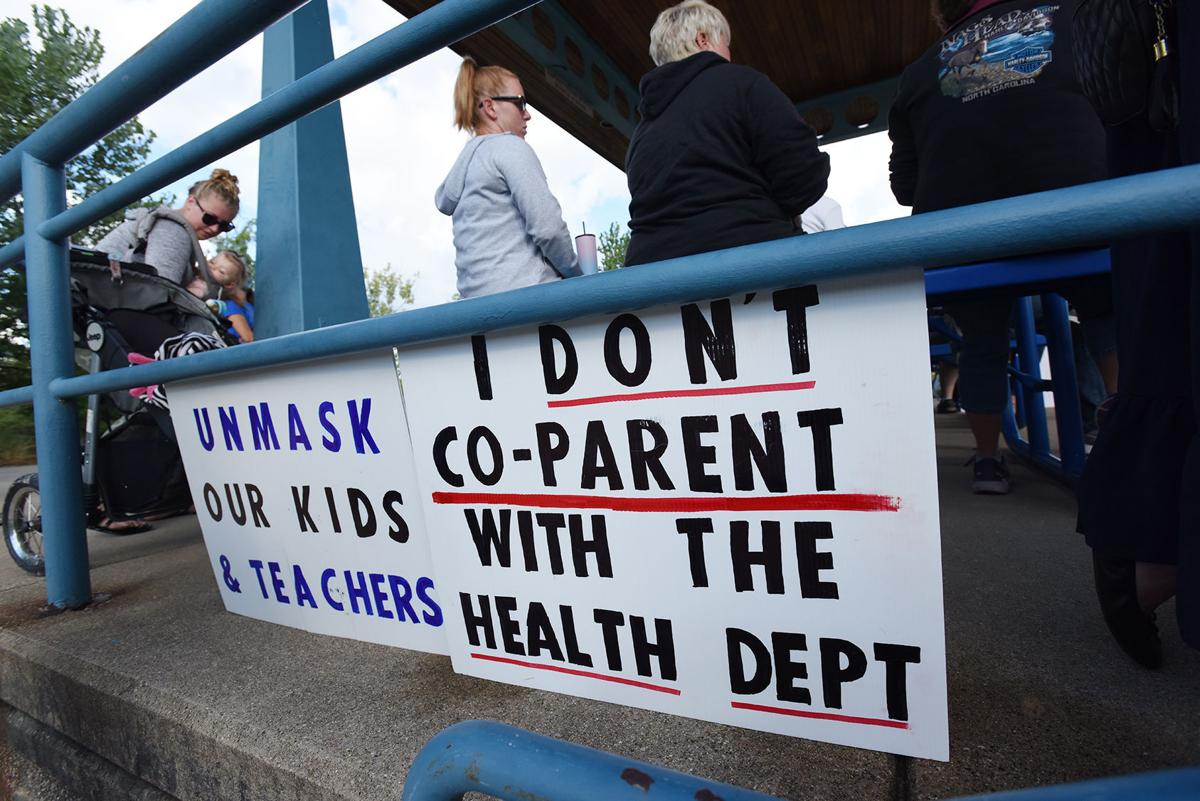 Signs in protest of the recent mask mandate are pictured at the Berrien County Board of Commissioners held at the Shadowland Pavilion in St. Joseph. 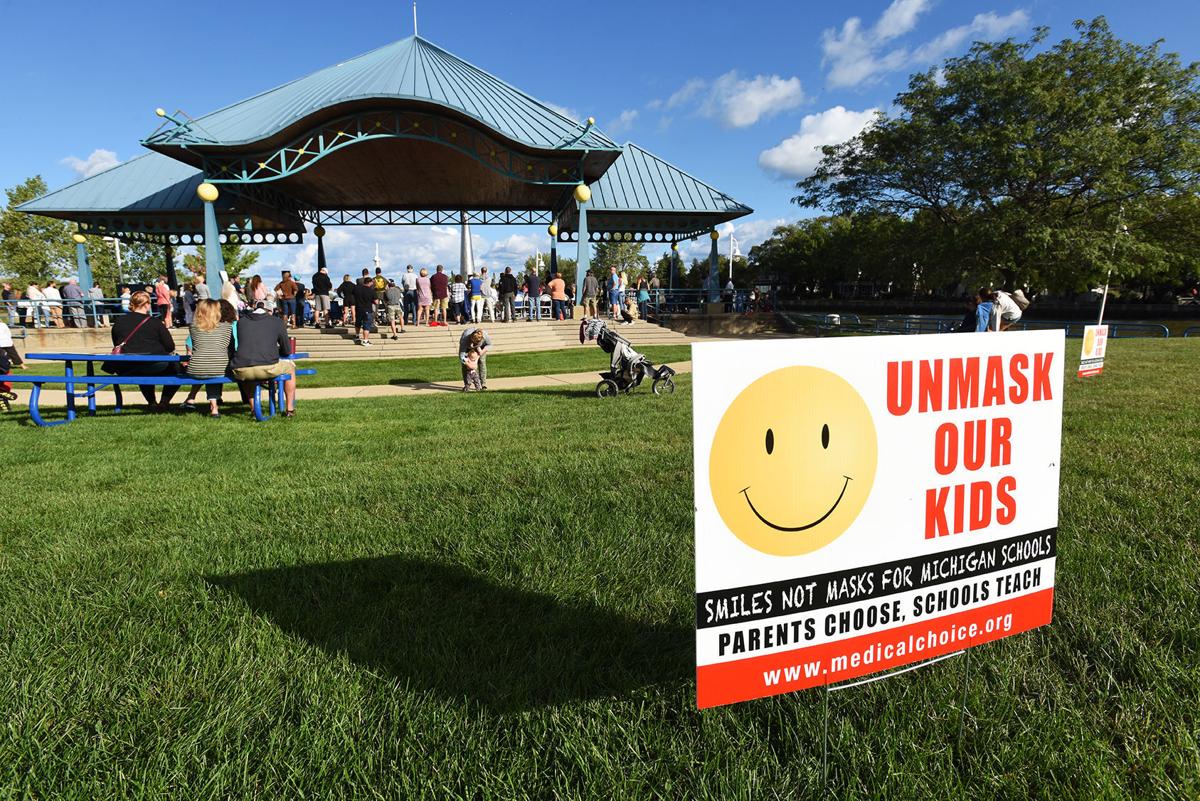 An "Unmask Our Kids" sign is pictured Thursday morning at the Shadowland Pavilion in St. Joseph as the Berrien County Board of Commissioners discuss the recent mask mandate. 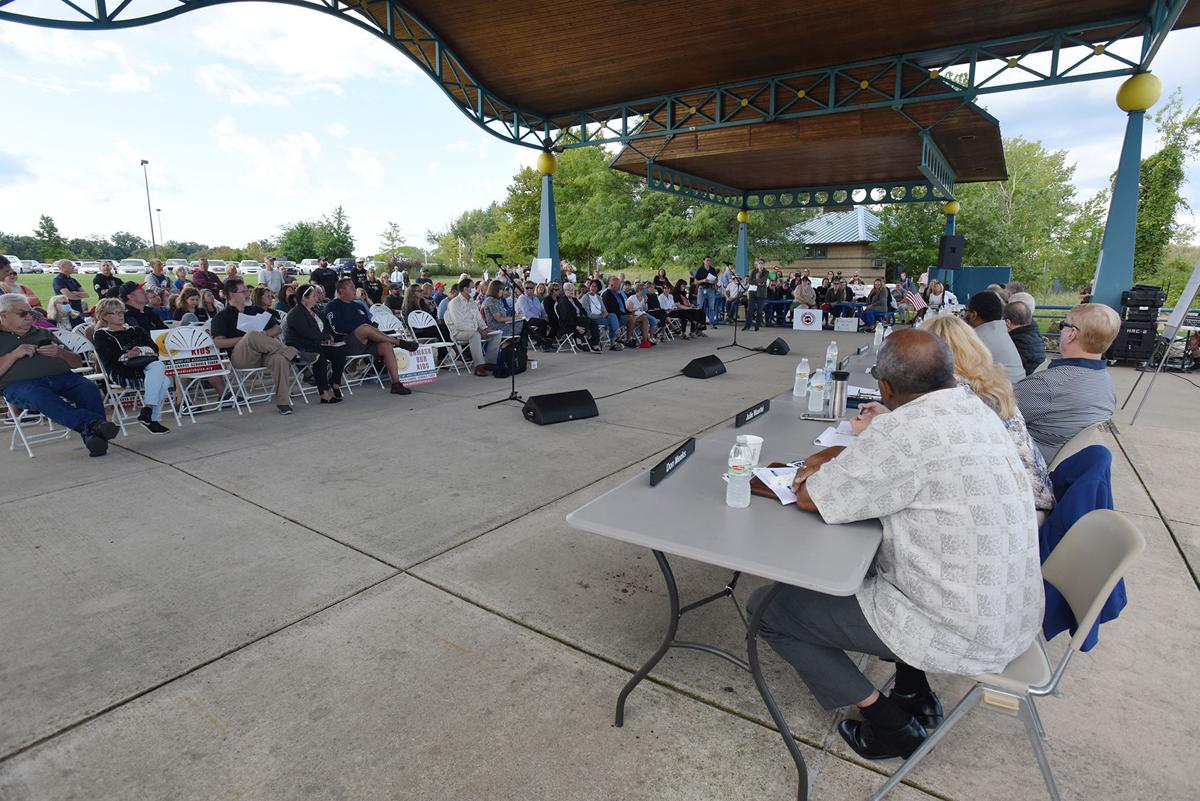 Berrien County commissioners hold Thursday's meeting outside at the Shadowland Pavilion in St. Joseph to accommodate the large number of people attending to discuss the recent mask mandate.

During the coronavirus pandemic crisis, TheHP.com has dropped the paywall for many virus-related stories. If you appreciate local journalism, please help us continue to keep Southwest Michigan informed by considering a subscription to HP All-Access (print and digital) or Online Access. Learn more here.

ST. JOSEPH — Two Berrien County commissioners told more than 100 protesters Thursday that they plan to introduce resolutions next week rescinding support for the health department’s COVID-19 response and call for a vote of no confidence.

At the heart of the issue is the Berrien County Health Department’s public health order that was issued Sept. 1, which required children in education settings to wear masks starting after Labor Day due to the county’s COVID-19 transmission rate being high since mid-August.

The order came a week after county commissioners approved a resolution in support of health department officials “in their continued response to the COVID-19 pandemic and in protecting the health and well-being of the residents of Berrien County.”

Commissioner Ezra Scott said the health department does some wonderful things and he voted for the Aug. 26 resolution to show that he supports the employees.

“What happened after we did that, I’m not happy with, and that’s why I want the resolution rescinded,” Scott told the crowd that gathered at Thursday’s meeting, which was held at Shadowland Pavilion in Silver Beach County Park. “... The kids, the masks. I don’t support that.”

Commissioner Julie Wuerfel said she not only supports Scott’s resolution, but she is asking for a resolution of no confidence.

Long line of people at Berrien County Board of Commissioners meeting, which is expected to go on until noon. Location changed to Shadowland Pavilion at Silver Beach due to crowd.

The two commissioners spoke after listening to almost three hours of public comments, most of which were against the mask mandate. Each speaker was given two minutes to speak.

Chairman Mac Elliott and Berrien County Sheriff Paul Bailey addressed the crowd several times in an effort to settle tempers while people were speaking in favor of the face mask mandate.

“Please, everybody. Give respect. Don’t make me come out and make you leave, OK? Just sit here and listen,” Bailey said at one point. “When people are up here talking, we’re all supposed to be quiet. ... We can voice our opinions, but we’ve got to show respect.”

At least one lawsuit has been received by the Berrien County Courthouse challenging the mask mandate.

The Berrien County Clerk’s office confirmed that a lawsuit has been received, but as of Thursday afternoon had not yet been processed due to the amount of errors in the lawsuit’s paperwork. The clerk’s office is waiting for lawyers to resubmit information.

Additional legal action may be taken by Brandon Cerecke of Lincoln Township, who told commissioners Thursday that he’s working with his lawyers.

He said he has two children at Lakeshore Public Schools and wants the wearing of masks and face coverings to be a choice.

Lincoln Township resident Aimee Foster said the mask mandate is unconstitutional and an abuse of power by Courtney Davis, acting health officer for the BCHD.

Foster said she believes the mandate is null and void because there isn’t a declared emergency issued by the county.

However, under the Michigan Public Health Code, local public health officers are authorized to “take actions and make determinations necessary or appropriate to carry out the local health department’s functions to protect the public health and prevent disease.”

Foster, along with others, asked commissioners to fire Davis.

Health department officials declined to comment after the meeting Thursday.

After the public comments portion of the meeting, several commissioners said they support allowing the elected school boards to decide what is best for their students.

Commissioner Teri Freehling said her two school-aged children were excited to go to school, before the mask mandate was enacted.

“They were ready to see their friends and have some sort of normality,” she said.

But on Tuesday, the first day masks were required, Freehling said she called the school district to say that both of her children were taking a mental health day.

“Last year, we asked our governor to allow for us to have control of what impacts COVID-19 has on this region, and I feel like what we are doing right now by telling the school districts that have an elected school board what we think is best through this health order that we are, in essence, doing exactly what we asked the governor not to do,” she said.

Commissioner Jim Curran said he supports the health department making recommendations and the school districts making decisions based on their individual data.

Elliott added: “My preference for the last several weeks has been to have the schools use their mitigation plans to work with the parents and to, ultimately, have it be a matter of choice.”

He said the data he’s seen on the virus doesn’t appear to constitute an imminent threat or epidemic.

Commissioner Rayonte Bell called for people with differing opinions to voice their opinions with love and respect.

According to the health department, the mask mandate would be rescinded 21 days after the county moves into moderate transmission levels if deaths or hospitalizations don’t increase during that time.