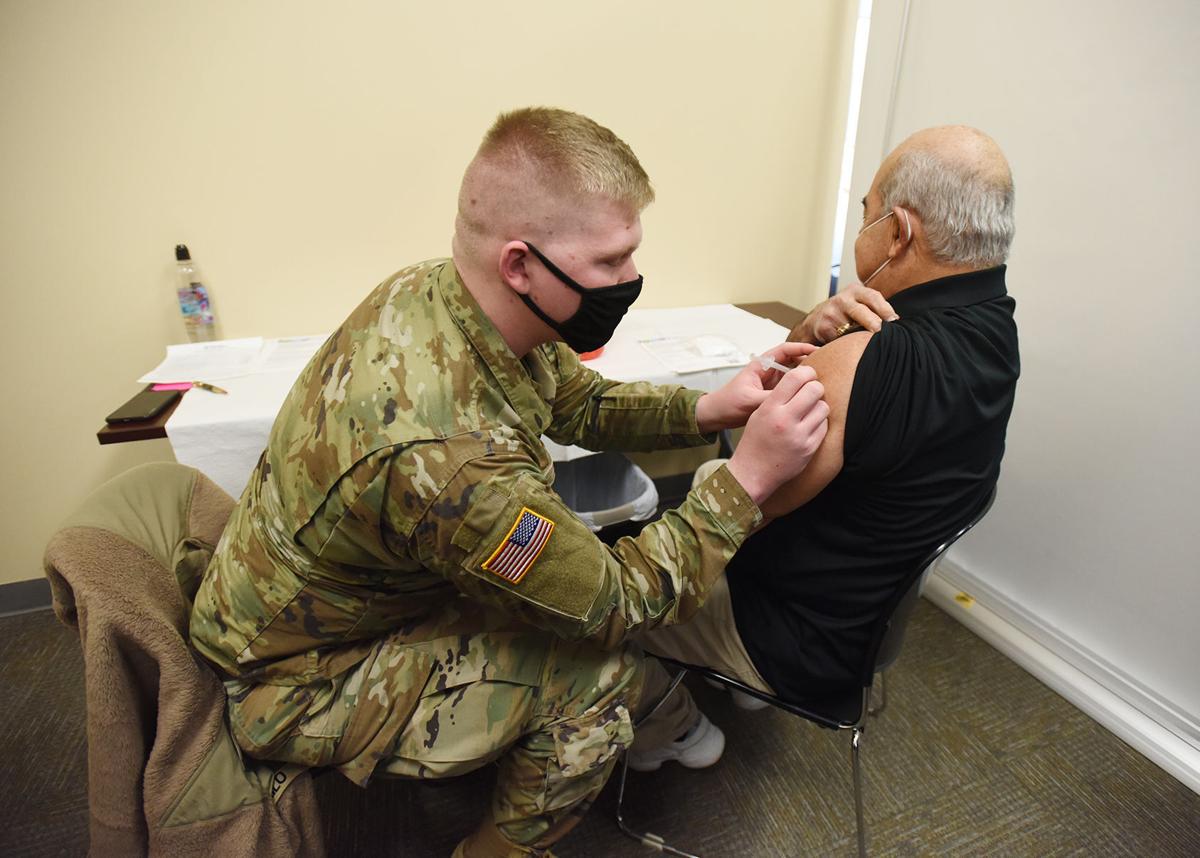 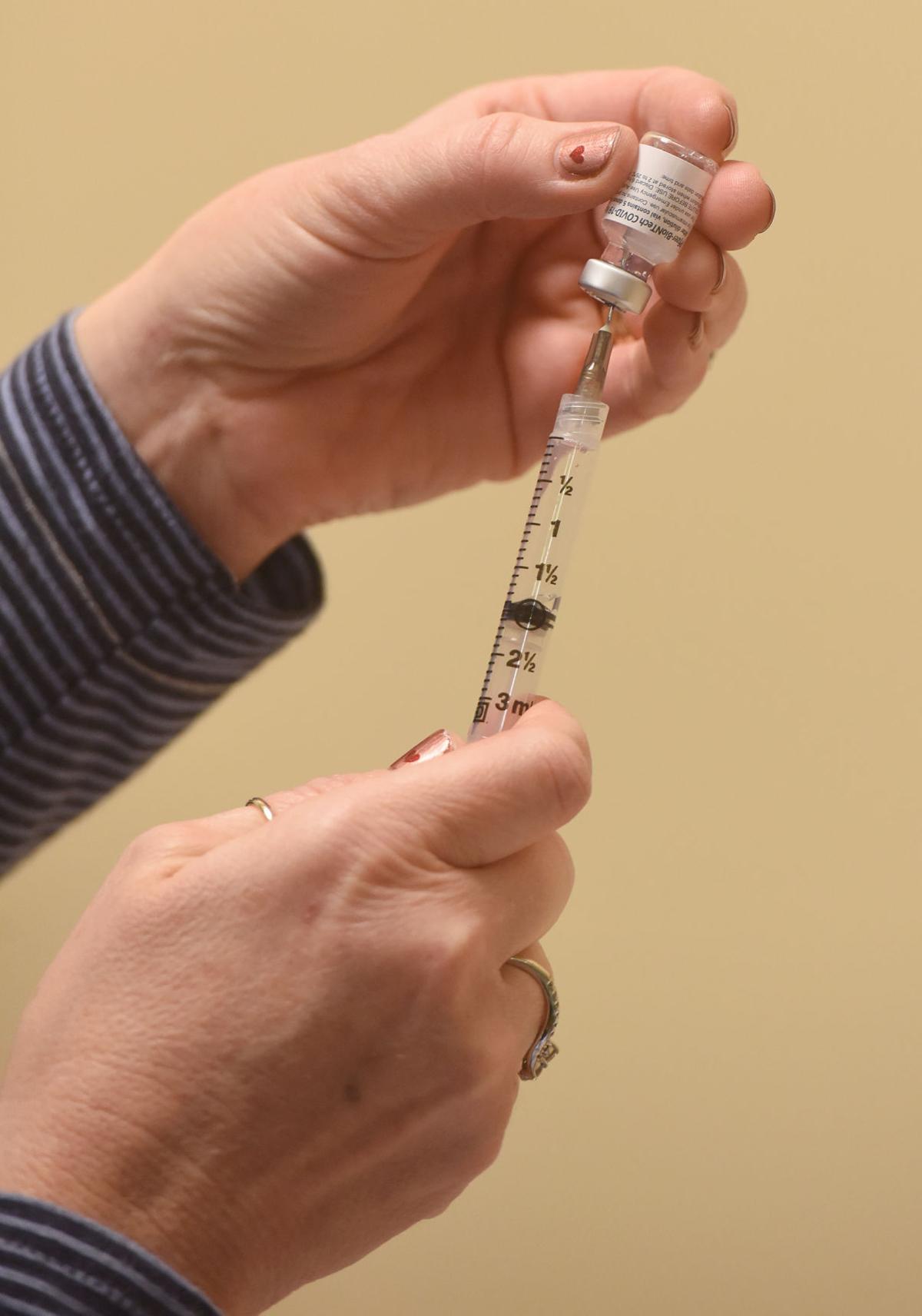 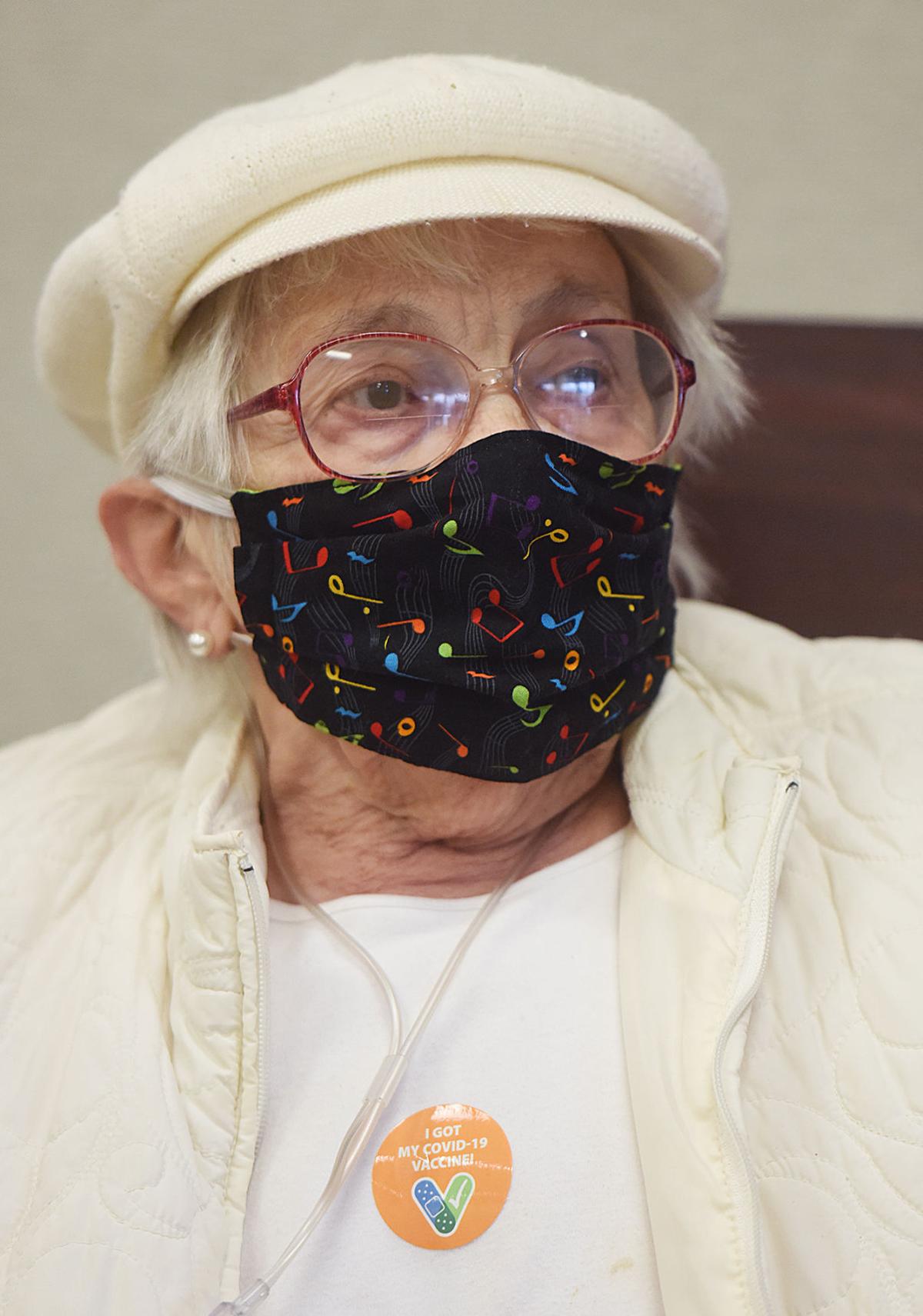 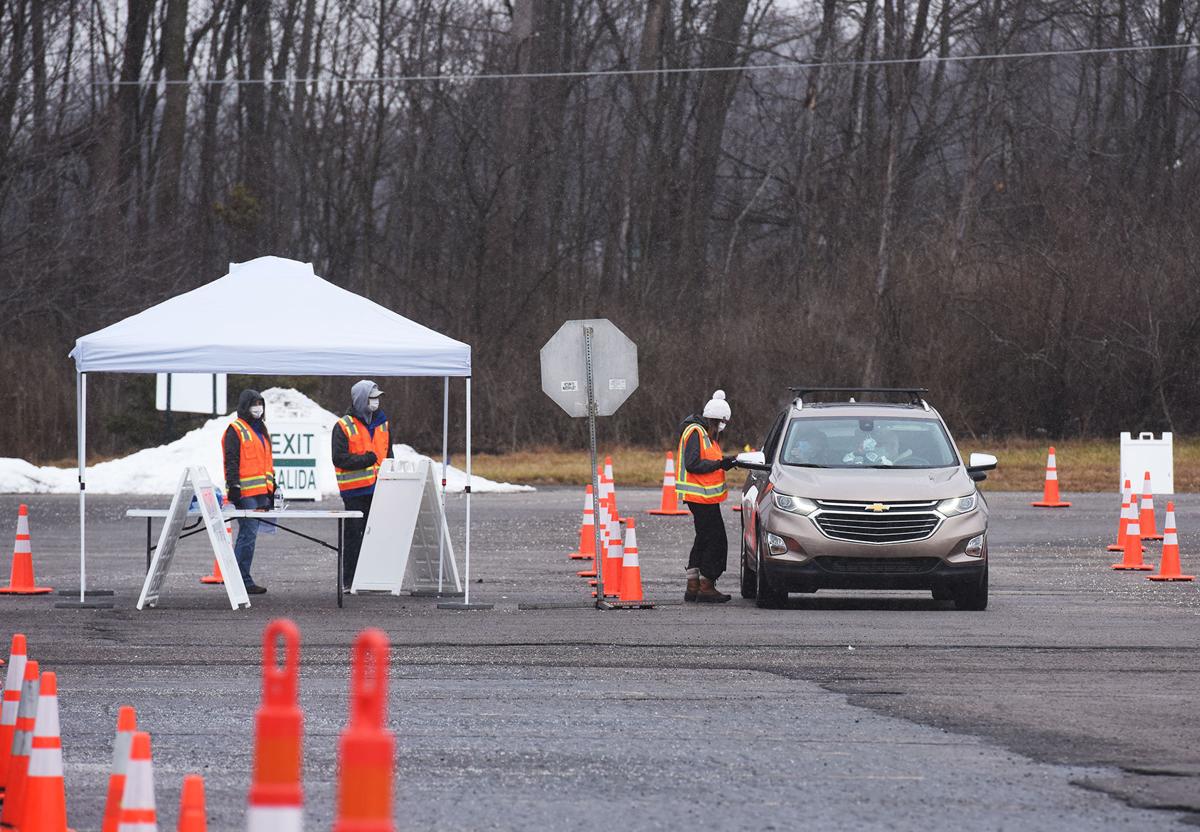 Cars arrive at the COVID-19 vaccination clinic on Saturday at the Berrien County Health Department in Benton Harbor. 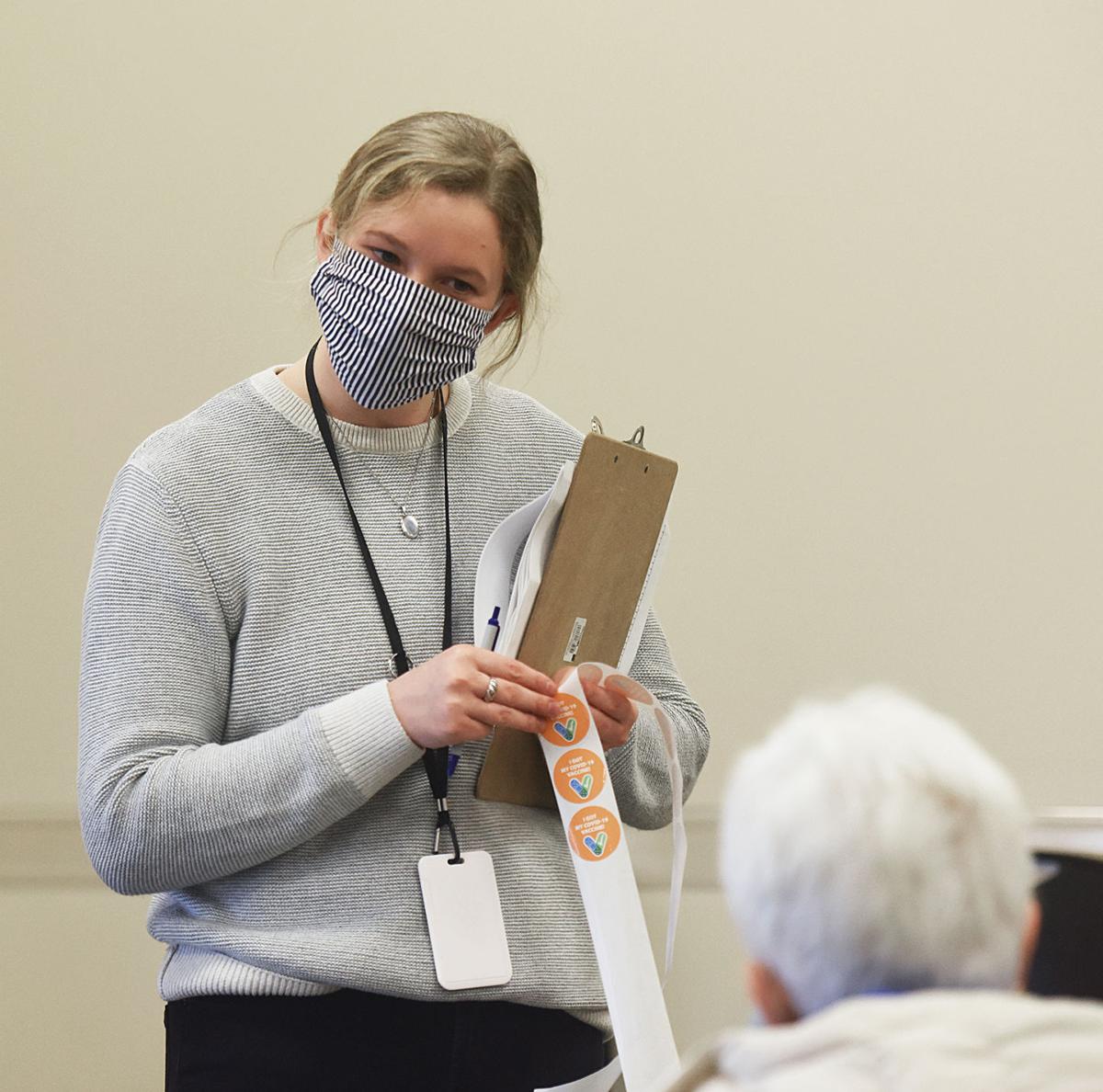 Julia Kneble checks on people in the post-vaccination monitoring area during Saturday’s clinic.

Cars arrive at the COVID-19 vaccination clinic on Saturday at the Berrien County Health Department in Benton Harbor.

Julia Kneble checks on people in the post-vaccination monitoring area during Saturday’s clinic.

BENTON TOWNSHIP — More than 900 Berrien County residents received their first dose of the COVID-19 vaccine on Saturday during a clinic at the Berrien County Health Department (BCHD).

“I’m so happy to be here,” said Ginny Pizzotti of Stevensville while walking into the building with her husband of 58 years, Norman.

The clinic was focused mainly on people over the age of 75, though some 65-74 were able to get vaccinated if they were a spouse, partner or caregiver of someone over 75.

“We’re still prioritizing those at the highest ages,” Gillian Conrad, spokesperson for the BCHD, said Saturday. “Our average age of death here due to COVID is about 80. So we really want to reach those that are in the highest risk of overwhelming our hospital system, and prevent death and severe illness.”

Attendees pulled into the parking lot, were directed where to go, checked in, and waited in their cars until their turn to go into the building.

During the check in, staff go over some basic information, like any symptoms of illness or if they’ve recently received another type of vaccine.

When it’s their turn, people are shown to a privacy booth with a nurse or a member of the National Guard, the shot is given, their appointment for their second dose is recorded on a card, then they wait in a monitoring area for 15 minutes to make sure they don’t have any immediate adverse reactions.

“They are so organized and I’m very thankful for everyone who has thought this through,” Ginny Pizzotti said. “They have a way to check on us, and it’s just phenomenal. I’m impressed for little old Southwest Michigan.”

She described it as the most serious vaccines she’s received, outside of her smallpox one.

“We’ve been waiting with bated breath. I had COVID and exposed him, so he had to go into quarantine, and finished just in time to get here today,” she said. “We would just encourage other people to get it.”

Norman Pizzotti said he and his wife were going to go home, crack open a bottle of Champagne and watch a basketball game to celebrate.

Ruth, 77, and Jerry Stelling, 80, of St. Joseph were also there to get their vaccines on Saturday.

They said the process of signing up for the waitlist and being scheduled was easy, as was getting through the clinic.

“It was very simple and smooth,” Jerry said.

“Everyone was very cordial,” Ruth added.

Conrad said the people vaccinated on Saturday will come back for their second dose at the exact same time in three weeks, Feb. 6, so it’s very easy to remember.

Appointments are set up with about 15 slots every 10 minutes, and they’re trying to squeeze in as many people as possible.

“Having a day where we can get 800-plus people through in a day, that’s what we want to get to several times in a week,” Conrad said. “This is our first of this size clinics. But our capacity is just going to continue to increase. We will reach a limit because of staff, but almost every single health department employee is out helping today.”

The BCHD requested members of the National Guard to help with the clinic, in addition to their staff.

“The National Guard guy giving me my shot, I didn’t know he had done it until it was all over with. It was not his first rodeo,” Norman Pizzotti said.

Candi Gabrielse, nursing manager at the BCHD, was preparing doses of the vaccine to be administered.

“It’s awesome because we’re getting a lot of vaccines out, which is good. We’re getting more out than we originally thought we were going to get out, so that’s exciting. The more we can get in a week, the better. That’s our goal,” she said.

Cal Bennett, 79, of Eau Claire said he got the vaccine on Saturday because his daughter works at the health department and helped get him scheduled.

Once he gets his second dose, and more people are vaccinated, he said he’d like to head south and get out of the cold weather.

Barb Mitchell, 91, of Eau Claire said she’s looking forward to exploring JoAnn Fabrics again, and getting out to some of her other favorite places.

Mitchell said she put her name on “all kinds of lists” to make sure she, her sister and her sister’s husband got the vaccine.

They all live together and have been able to keep each other company during the pandemic.

“But it’s nice to be outside. They don’t let us out,” she said, talking about her kids.

Conrad said the BCHD has had an overwhelmingly positive response from people eager to get vaccinated.

“But, the demand for the vaccine is still outpacing the supply that we have,” she said. “We hope that as we move into the future, we will have more regular shipments, and that knowledge of regular shipments coming will help us plan and be able to open up more appointments.”

She said some people may feel rushed when it’s their turn to sign up for an appointment, but it’s because the health officials want to make sure they have doses of the vaccine ready, and don’t have to cancel at the last minute.

“The time of vaccines being available in doctor’s offices and pharmacies is coming fast, but we feel the BCHD and Lakeland have solid plans to get us until that time,” Conrad said. “If you’re on our waitlist, we have you. We’re planning for you, and we will be opening more and more clinic slots over the coming weeks.”

She said out of the estimated 30,000 people in Berrien County who are over 65 years old, about half of them already have their name on the waitlist. In addition, the county is nearly done administering the first dose of the vaccine to everyone in Phase 1A.

To get on the BCHD’s COVID-19 vaccine waitlist for those 65 and older, visit www.bchdmi.org/1745/COVID-19-Vaccine-Information.