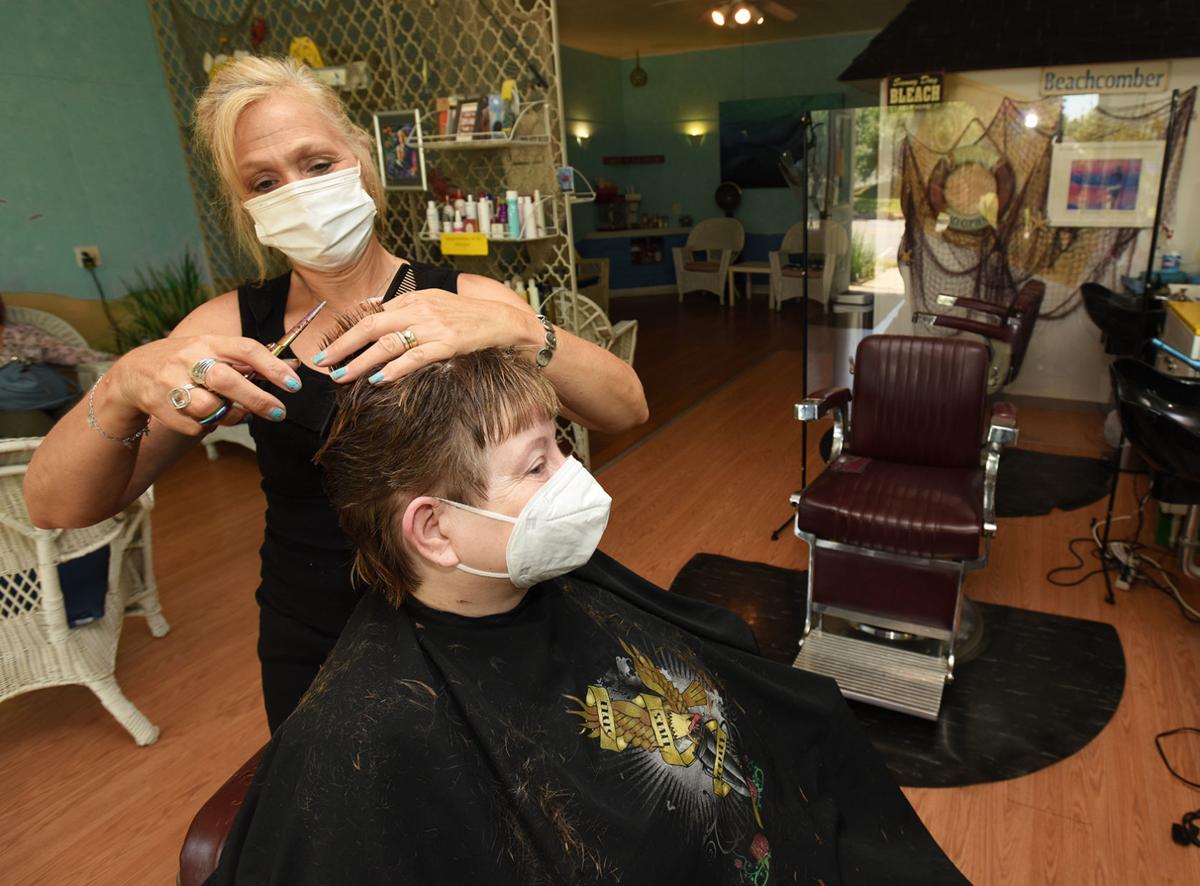 Kaye Krieger, owner of Lakeview Beachcomber Salon, cuts Danette Albrecht’s hair Wednesday at her St. Joseph salon. Krieger, like many area barbers and hair stylists, has been putting in long hours to get customers caught up. 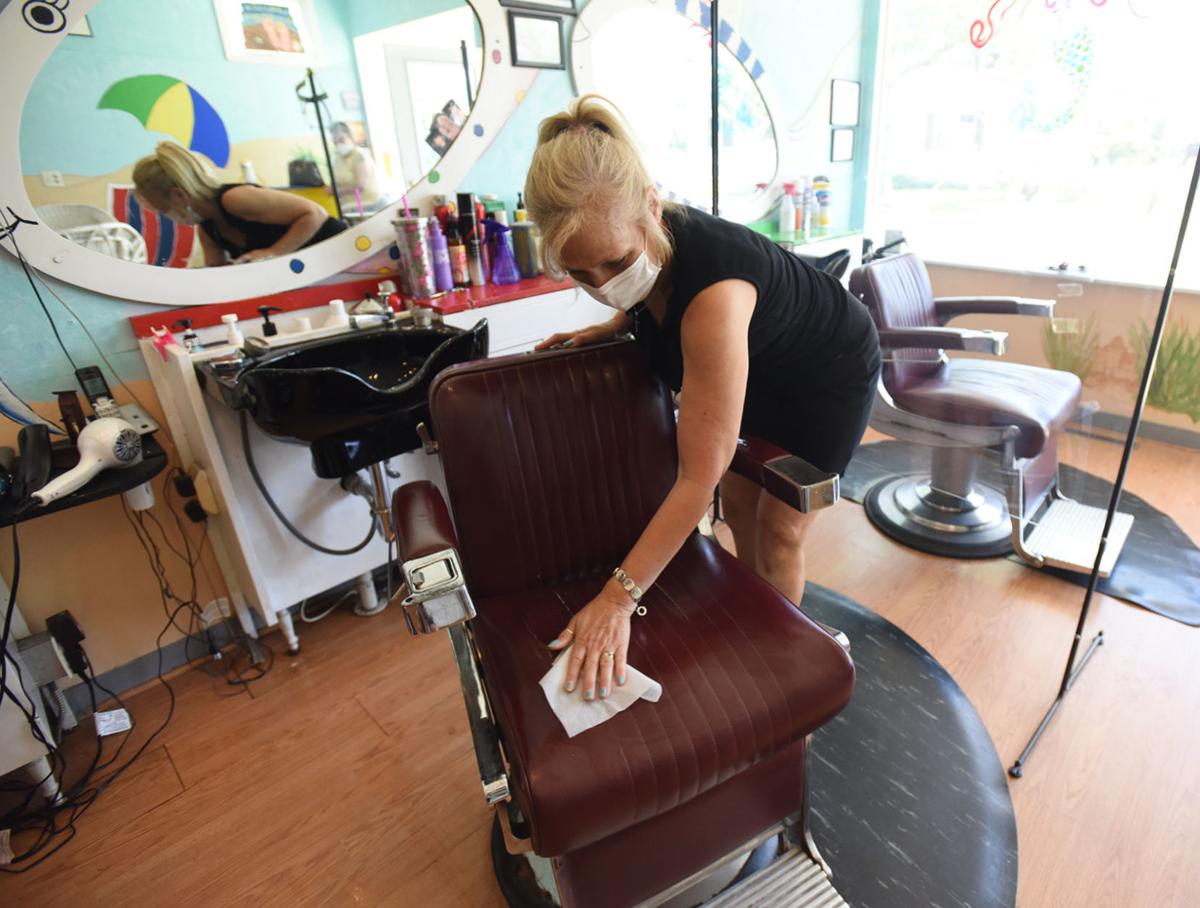 Kaye Krieger wipes down a barber chair after a cut Wednesday afternoon at her St. Joseph salon. Krieger has introduced a variety of safety precautions to protect herself and her clients during the ongoing pandemic. 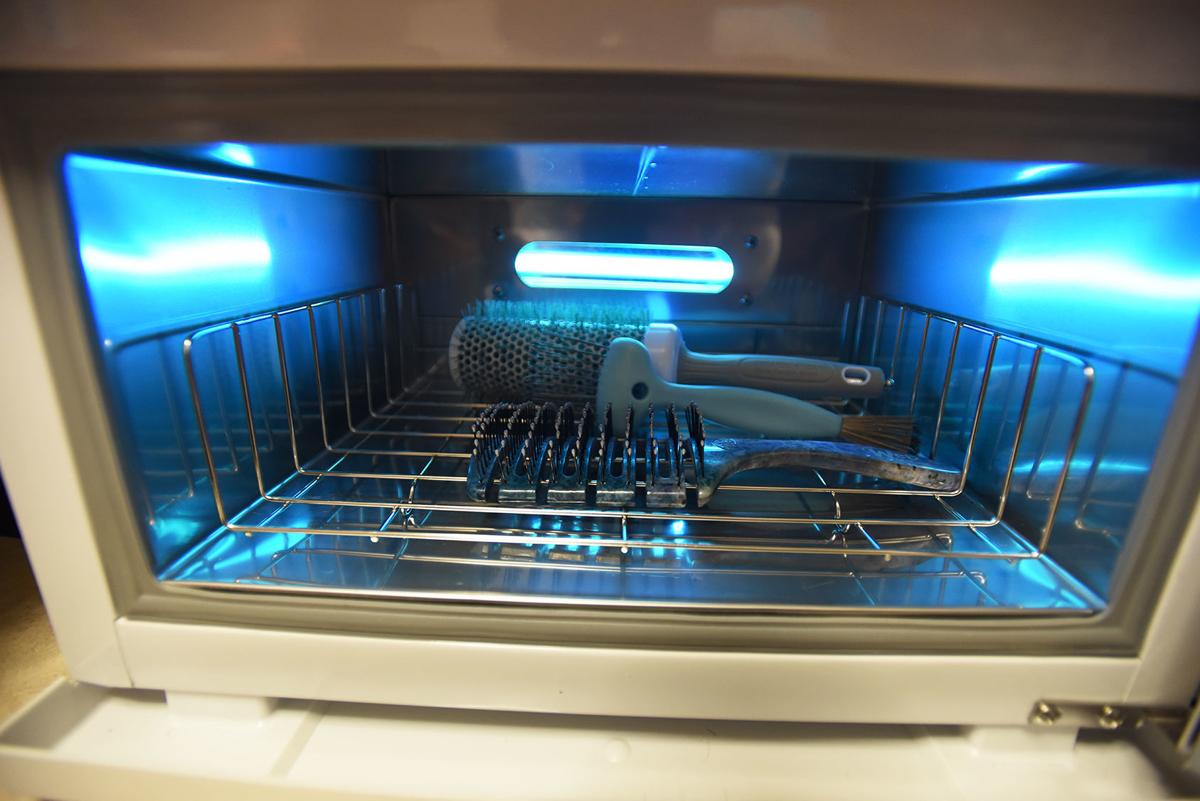 UV light is used at Krieger’s Lakeview Beachcomber Salon to disinfect brushes and combs between uses.

Kaye Krieger, owner of Lakeview Beachcomber Salon, cuts Danette Albrecht’s hair Wednesday at her St. Joseph salon. Krieger, like many area barbers and hair stylists, has been putting in long hours to get customers caught up.

Kaye Krieger wipes down a barber chair after a cut Wednesday afternoon at her St. Joseph salon. Krieger has introduced a variety of safety precautions to protect herself and her clients during the ongoing pandemic.

UV light is used at Krieger’s Lakeview Beachcomber Salon to disinfect brushes and combs between uses.

Kaye Krieger’s phone has been ringing off the hook since she returned from the forced pandemic break.

The owner of Lakeview Beachcomber Salon in St. Joseph has been working 12-hour days since reopening her business. Like other stylists and barbers, Krieger has had some catching up to do since her industry was shut down by the state due to safety concerns related to the COVID-19 pandemic.

“We don’t mind working this hard because we haven’t worked in three months,” she said. “I’ve had to fix some botched jobs. We’ve always been some of the cleanest people in the industry. One thing I’ve learned is that hairdressers are essential.”

Hairdressers and barbers were among the last group of businesses to reopen in Michigan in mid-June, after finally getting the green light from the state.

When Krieger shut down her salon, she had 105 people scheduled on the books for the following couple weeks. Every time Gov. Gretchen Whitmer would extend her executive order, Krieger made it her responsibility to call all those people back.

The problem was she made those hundreds of calls three times to reschedule the appointments. The endeavor would take several days to get ahold of everyone.

Lakeview Beachcomber Salon now has plexiglass dividers between each station, Krieger bought disposable capes, ultraviolet light warmers are used to sterilize scissors, and a special Barbicide solution is used for combs and brushes.

Everyone – including customers – has to wear masks. Face coverings are available for customers who don’t have their own. Krieger said she tries to only schedule one client per stylist at a time.

“We are trying to minimize the number of clients in here at a time. Our girls are staggering their days,” Krieger said.

Cynthia Orlaske, owner and stylist of The Gallery Salon, said they don’t have any available appointments until mid-July.

Due to the amount of time needed to disinfect between clients, Orlaske said they can’t book appointments as tight as they used to.

Several of the chairs were taken out of the Benton Harbor salon’s waiting room, with the remaining ones stationed 10 feet away from one another. Masks are a requirement and friends can’t come in with customers.

Orlaske also took online safety classes and is now COVID-19 certified. She said they disinfect clippers after every use and staff members alternate on what chairs are used.

The disinfectant that is used to clean chairs has to sit on the surfaces for 10 minutes in order to work.

“I was OK with what Whitmer was doing. I don’t think it was the wrong thing to do,” Orlaske said. “I just felt bad for my clients. I felt bad I wasn’t able to make them happy. Now that we’ve reopened, it’s not the usual salon experience.”

The changes that Krieger made also have been by the book.

At Beachcomber, signs ask that anyone who has recently been sick to remain at home. And if someone is suspected of being sick, there is a thermometer on site.

Normally her salon offers coffee and water. In addition to removing those services, they are not able to display the candy basket that they have become known for.

“We’re not allowed to serve any food or drinks. There aren’t even any magazines,” she said.

The number of customers Krieger sees on a daily basis ranges between 20 to 25 people.

In her 39 years of cutting hair, Krieger said she’s never gone more than a few weeks without a pair of scissors in her hands.

The pandemic, however, changed that.

“I’ve never been off that long,” Krieger said. “I had a baby and I was only off for three weeks. I broke my arm and I got put in a waterproof cast and had to come back after five weeks. Three months was a long time.”

Krieger said she was forced to pick up a second job and cleaned houses since she couldn’t secure funding for a small business loan.

While she was initially approved for a loan, Krieger said the program’s funding ran dry.