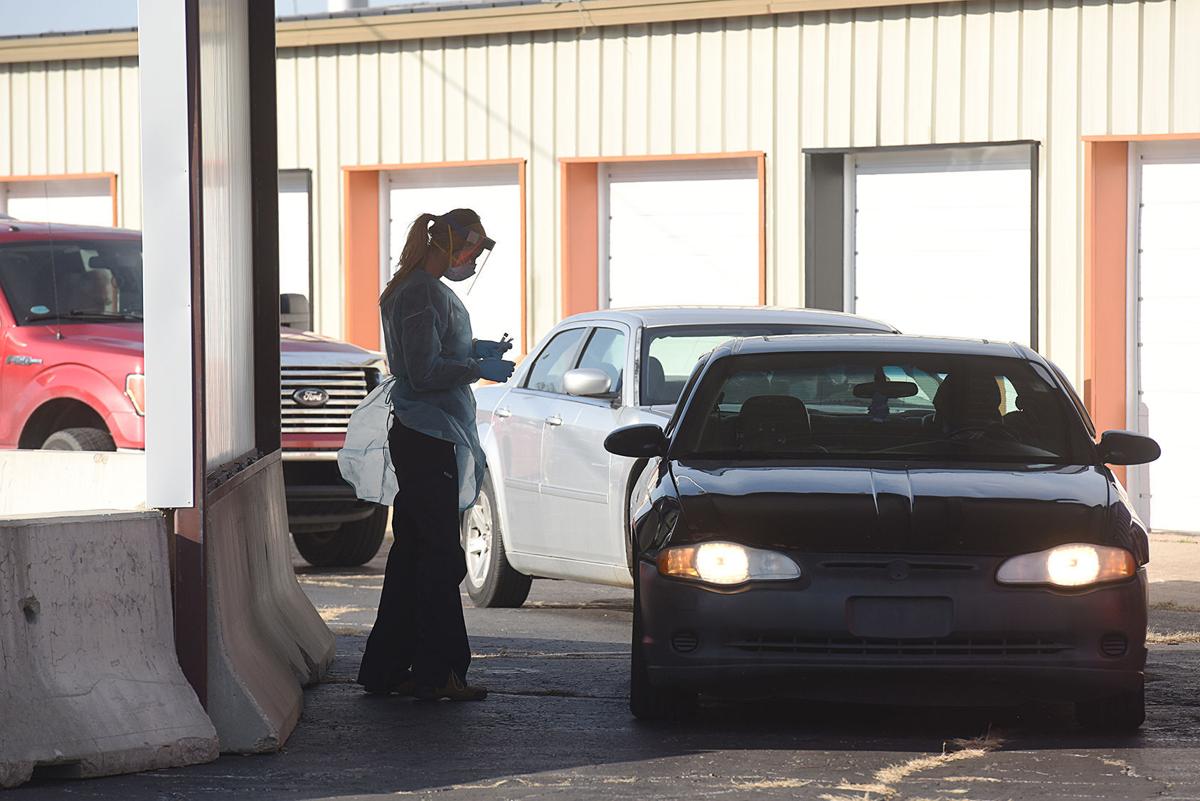 Cars line up at the Benton Harbor High School parking lot on Friday at a COVID-19 drive-thru testing site, operated by InterCare Community Health Network in collaboration with Spectrum Health Lakeland. No appointments are needed at the testing site, which is now open Mondays, Thursdays, Fridays and Saturdays, and is available to anyone with or without symptoms, free of charge, with a photo ID. 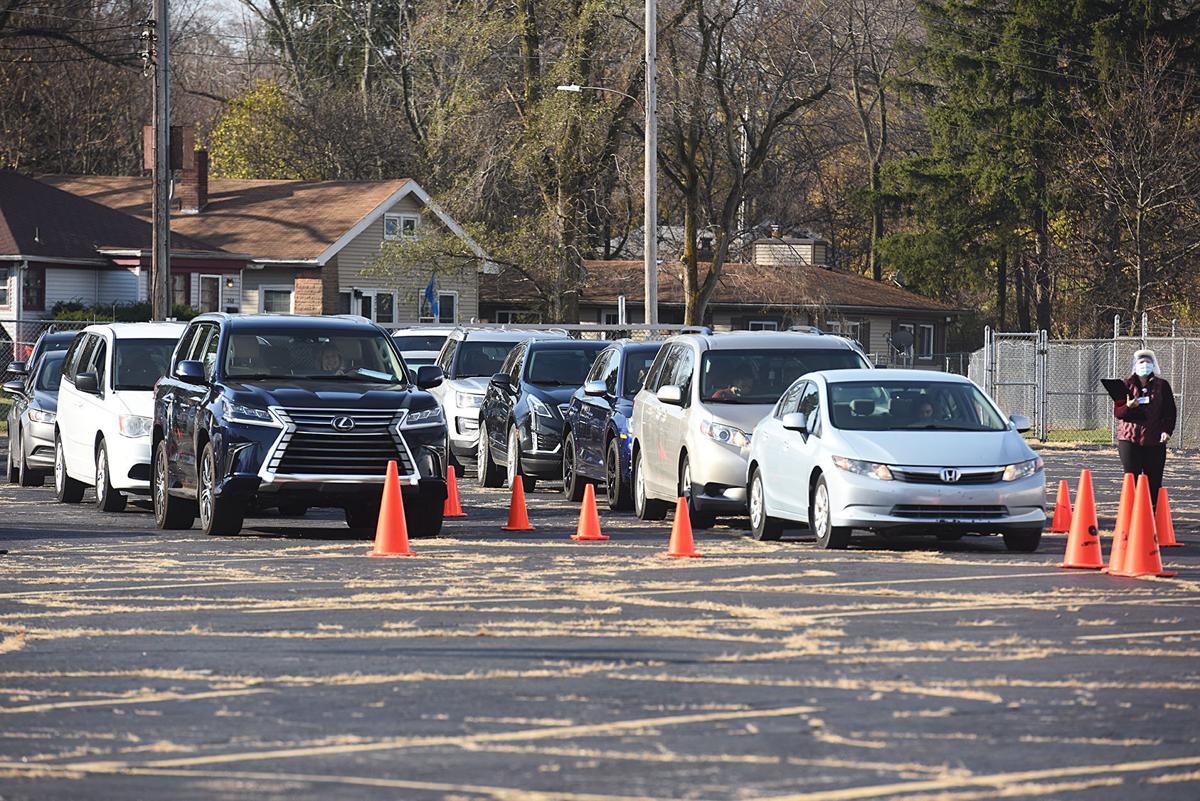 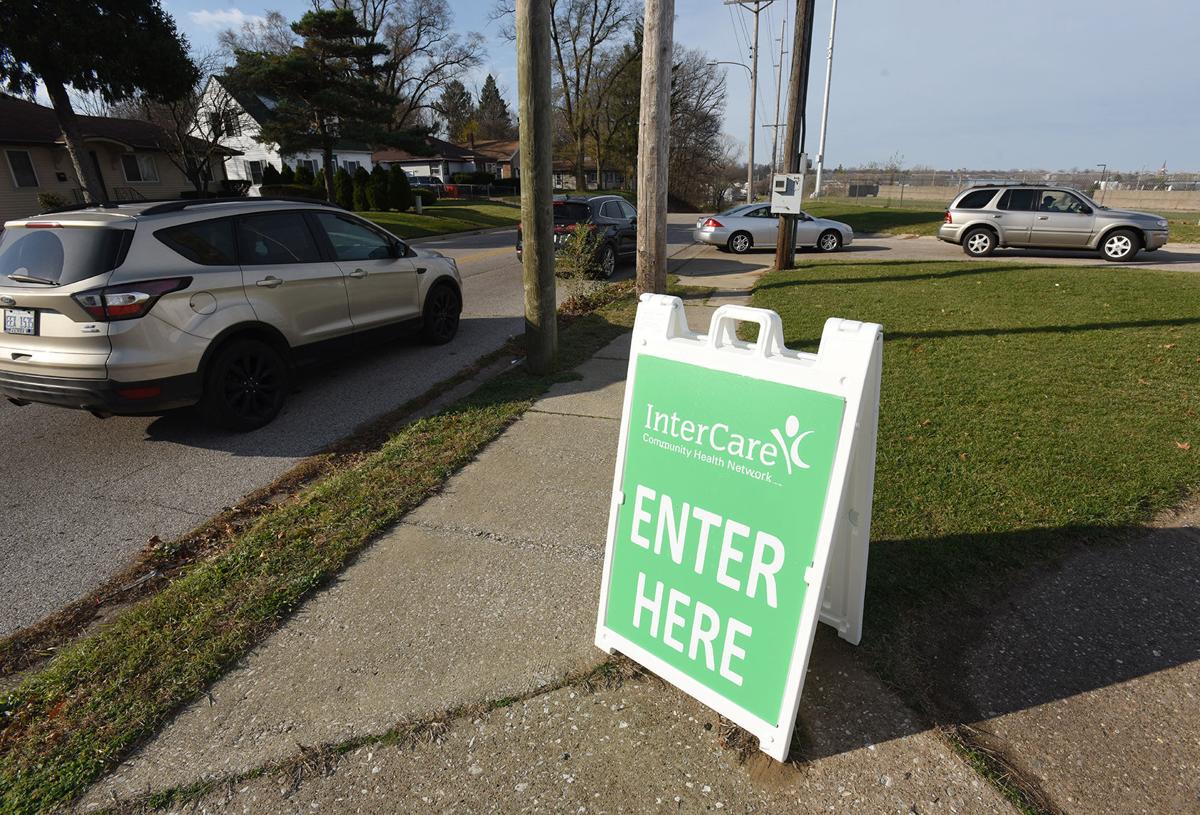 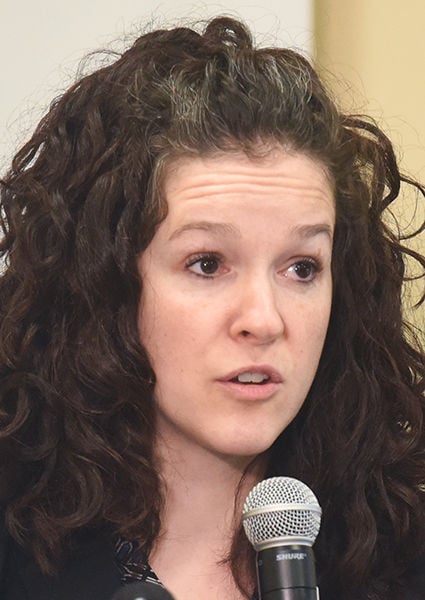 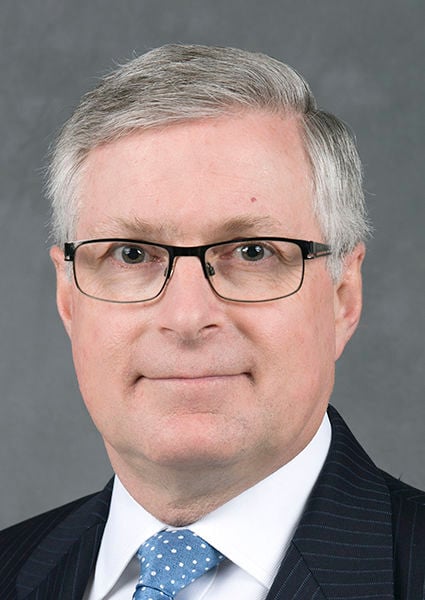 Cars line up at the Benton Harbor High School parking lot on Friday at a COVID-19 drive-thru testing site, operated by InterCare Community Health Network in collaboration with Spectrum Health Lakeland. No appointments are needed at the testing site, which is now open Mondays, Thursdays, Fridays and Saturdays, and is available to anyone with or without symptoms, free of charge, with a photo ID.

The eight months of the COVID-19 pandemic have been like one long final exam week for health officials in Berrien County.

“There are a number of reasons why the finals week is getting worse and harder,” Dr. Loren Hamel, president of Spectrum Health Lakeland, said in an interview with The Herald-Palladium this week.

Now in a third wave, health care workers are burnt out, hospital capacity is shrinking, supplies are running low again and contact tracers can’t keep up. That’s not to mention the pandemic fatigue plaguing the general public.

“As we started this epidemic, everyone seemed concerned and aligned and wanted to be careful. As time has passed, that concern has mostly felt, to health care providers, as decreased. The care, the diligence has also declined and the pandemic has gotten worse,” Hamel said. “And in the middle of all that, tragically, this became political. For those of us in health care, it’s not political, it’s about saving lives. The lives of our friends and neighbors. That’s not political. That’s just showing love and respect for those we serve.” 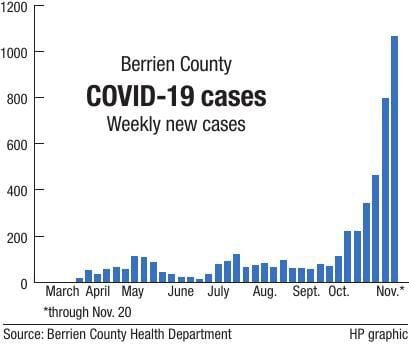 Another coronavirus surge was long predicted, but Hamel said it was predicted to happen earlier.

“I think the concern, the diligence, the governor’s orders, the response across the country, helped slow that surge down. That was a really favorable thing. It helped us catch up with supplies. It helped us develop new therapies. It helped us plan for this surge,” he said.

But, Hamel said, as folks saw flat trend lines through the summer, they became less concerned.

“And maybe even a little more complacent and indifferent – thinking ‘Oh, maybe this isn’t going to be so bad.’ The surge that we’re currently seeing is identical to the surge we predicted,” Hamel said.

Nicki Britten, health officer at the Berrien County Health Department (BCHD), said one of the biggest sources of frustration for many people is not knowing what metrics need to be hit at the local and state level to know that the curve is being flattened again and things can reopen.

“We’d want to see a slowing in the number of cases that are coming in each day,” she said. “Right now, we’re still in that exponential growth, where we’re doubling our cases probably every 10 to 14 days.”

Percent positivity and hospitalizations also need to come down.

“We want to see those three things leveling off and ultimately going down, but at this point I’d settle for leveling off, because right now, all those things are increasing without slowing down,” Britten said. 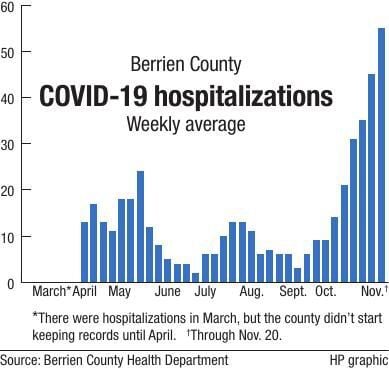 With national and state testing strategy so uneven, hospitalizations have become the best way to understand the level of COVID-19 transmission in a community.

“The thing least impacted by a testing strategy is that hospitalization rate, because whether you’ve had the test or not, if you’re to that level where you need care, you are going to show up at the hospital,” Britten said.

On Friday, Spectrum Health Lakeland had 57 COVID-positive patients admitted. The hospital never reached 30 hospitalizations at one time during the first or second wave.

Hamel said the hospital technically has the beds to have double that, but lacks the staff or supplies to accommodate so many seriously ill patients.

“If that goes up by 10-15 percent (about 5-8 more patients), staffing is going to be extremely difficult because we’ll also have to staff that with fewer people, working harder with sicker patients. That is the concern,” he said.

Hamel said the Spectrum Health system had the ability to do more testing than other health systems in Michigan, and yet it’s still running low because of the volume of people who need tests.

“We’re going to run out,” he said. “The next two or three weeks are going to be very challenging weeks and if we don’t see the curve flatten three to four weeks from now, in the middle of the holiday season, it’s going to be an incredible struggle.”

“I see courage in eyes, smiles in faces, compassion in hearts, and that’s all a wonderful thing. But I also see signs of burnout. I see folks that just do not have the resilience they had a month or two or three ago,” he said.

They’re also susceptible to getting the virus, which at best would mean having to take two weeks off work to quarantine. At worst, they could become seriously ill or infect a family member.

Britten said what the community does right now will shape how the hospital looks two weeks from now.

“Whoever might need hospital care in 14 days, they’ve been exposed and potentially infected already. What happens in weeks three and four from where we are right now, continues to be up to us,” she said.

Hamel said there is about a 1 in 9 chance you’ll be hospitalized if you feel sick with COVID-19. 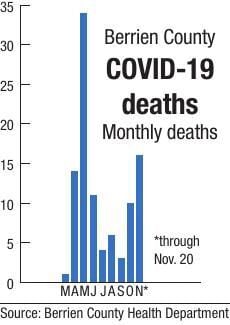 Hamel said the average duration of someone being sick enough to be admitted to the hospital and dying is several days, sometimes as long as a week or two. He did say there are some outliers, such as people who are hospitalized for a month and on a ventilator that whole time.

The virus continues to affect older people and those with chronic medical conditions disproportionately. Britten said the gap in racial disparity also is still there, but it is closing. 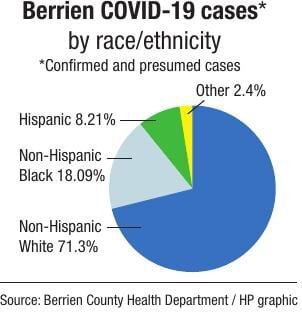 Hamel said, if you’re less than 30 years old, your chance of getting COVID is about the same as everybody else, but your chance of dying from it is near zero.

When you get over 60, and particularly close to 80, your chance of dying from COVID goes up to close to 10-11 percent – “which is just substantial,” Hamel said. 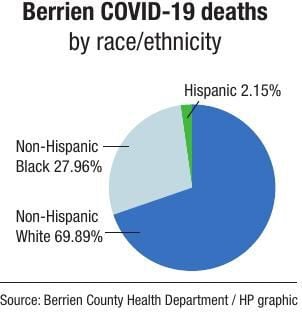 Britten said much of the transmission of the virus over the last six weeks has been household spread, and mostly asymptomatic – those with only mild symptoms.

Last week the BCHD, overwhelmed with the amount of cases that called for contact tracing, started prioritizing certain cases and leaving the rest to take “personal responsibility” when they are exposed.

Britten said once a community reaches such a high level of spread, it’s not as important to keep track of how and where the virus is spreading.

“When you’re almost as likely to get it in any interaction with another person, having that information isn’t about finding a specific outbreak or cluster based on a specific location, it’s more about how do we minimize risk all the way around,” Britten said.

“The virus will go as long as there’s a warm body that’s susceptible and does not have that immunity naturally or through vaccination,” Britten said.

Only about 3.3 percent of Berrien County’s population is considered, at this juncture, as a confirmed or probable case of COVID-19. Many more people would have to get sick, and die, before natural herd immunity is reached.

Where do we go from here?

Britten and Hamel both support the new restrictions put in place by the state this week.

“We know that the data supports avoiding gatherings and minimizing contacts between people,” Britten said. “A public health approach to that is to try to make it so those things that are risky are a little bit more difficult to do.”

Hamel said the risk of transmission is smaller if you remain socially distant, cover your nose and mouth with a mask, and keep your hands sanitized.

“We’ve seen that in our own health care workers who we know are exposed to COVID-positive patients. It’s about less of what you can and can’t do in business and in school, or if you can be as diligent as possible in distancing, masking and sanitizing,” he said.

Britten said it’s very easy to think we have two options – shut everything down or open everything up.

“There is a lot of space in between those two lines of thinking,” she said. “If we can get the right mix, and continue to have some amount of collective agreement and collective action, we’ll be able to slow things enough to buy us more time for vaccine development, distribution and administration. And we’ll also be able to see improvements in therapeutics.”

Hamel said in such a polarized world, we have to find common ground on this topic. He suggested thinking about it in terms of asymptomatic or minimally symptomatic people – like we did in the spring.

“If you fully recognize the role of asymptomatic transmission and recognize that you could be that person to give it away, or gets it then gives it away – it’s worth wearing that mask. It’s worth maintaining that distance and it’s worth keeping my hands immaculately clean,” Hamel said. “We’re going to get through this together, but if we fight that instead of agree on that, it’s going to produce much more suffering, and sadly, many more deaths.”

Britten said she has lived in this community for 11 years now and it is clear that the community values life.

“As the pandemic continues to pull back the veil and show who our true selves are, and what we really truly believe and care about, I think we need to continue to lean into those values that were demonstrated to me as a transplant to this community – that we really do care about each other,” she said. “We can act today in shaping how we want our communities to continue to be, and what we want them to look like on the other side of this challenge.”

“That’s my motivation, and I would just ask the community: Let’s hang together. Let’s hang tough. Let’s help each other. We will get through this and if we do it well, we will save lives,” he said.