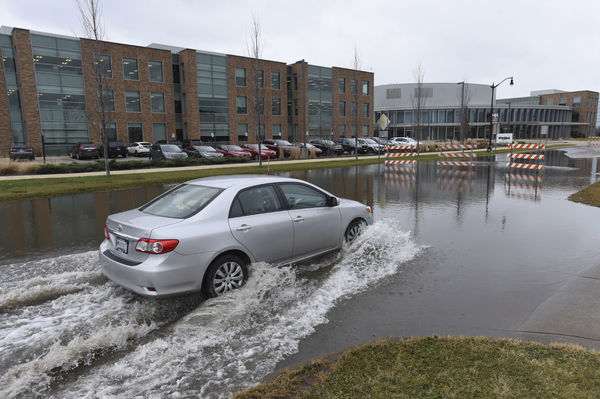 A car drives through a flooded section of Main Street in front of Whirlpool Corp.’s Riverview Campus on Monday afternoon. The Michigan Department of Transportation has had to close that stretch of road several times this year due to flooding caused primarily by the high water level of Lake Michigan. 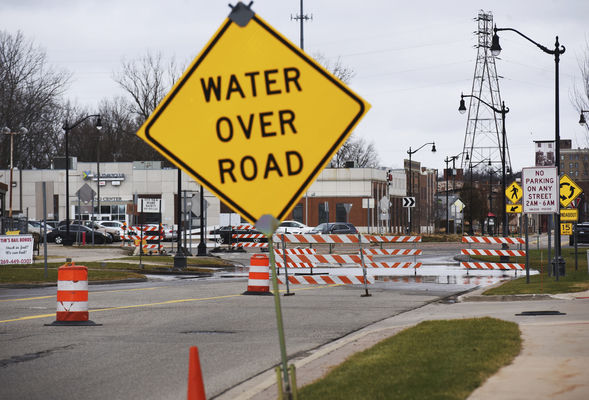 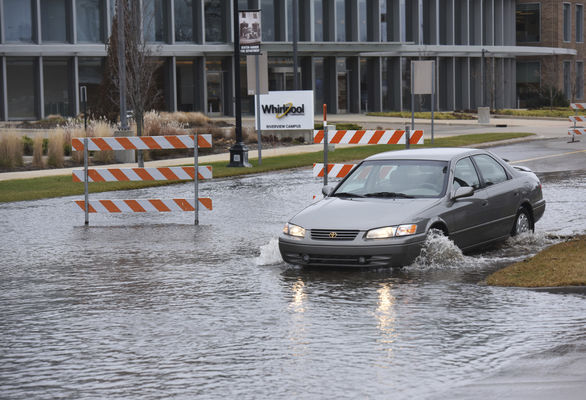 A car drives through a flooded section of Main Street on Monday afternoon before MDOT temporarily closed the roadway.

A car drives through a flooded section of Main Street in front of Whirlpool Corp.’s Riverview Campus on Monday afternoon. The Michigan Department of Transportation has had to close that stretch of road several times this year due to flooding caused primarily by the high water level of Lake Michigan.

A car drives through a flooded section of Main Street on Monday afternoon before MDOT temporarily closed the roadway.

BENTON HARBOR — Main Street in Benton Harbor in front of Whirlpool Corp.’s Riverview Campus was again closed Monday due to flooding, meaning that people who want to cross the St. Joseph River on Bicentennial Bridge between the Twin Cities have to find a different route.

The bridge is one of two bridges connecting the downtown areas of St. Joseph and Benton Harbor. And while the bridge itself is passable, only a few businesses can be reached in Benton Harbor before cars hit the flooded part.

Everyone agrees this is a headache that needs to be fixed. What they don’t agree on is the cause of the flooding and who should pay to address it.

Former Benton Harbor City Manager Darwin Watson, who works as a consultant of special projects for Prairie Real Estate Group, said Main Street wouldn’t be flooding as badly if the Michigan Department of Transportation hadn’t lowered Main Street by 18 inches when it was reconstructed in 2008-09.

He said MDOT took the street down to the road bed, removing decades worth of 2-inch asphalt “caps” that smoothed out the road. Main Street is also the I-94 Business Loop and the designated route in case of emergencies on I-94 (making it a state road).

“In older times, you had railroad timbers that were in Main Street for trolley cars and things of that nature,” Watson said. “They had to get all of that stuff out of there.”

MDOT spokesperson Nick Schirripa said it is common practice during reconstruction of a road to remove all of the layers of the road bed. He said the flooding is due to Mother Nature and is not unique to Benton Harbor.

“There are communities all up and down the lakeshore that are flooding,” he said. “... If we hadn’t lowered the road during reconstruction, the flooding would be somewhere else.”

Schirripa said a partial fix may be to raise Main Street, between the Bicentennial Bridge and the roundabout at Riverview Drive, by 8-10 inches. But he said that can’t be done until spring at the earliest, because asphalt plants close around mid-November.

Schirripa said even if Main Street was raised, the flooding problem would remain.

“We can raise the road, which gets it out of the water, but that doesn’t address the root cause of the problem – moving water off the land,” he said. “It’s hard to move water through a storm drain system when the entire system is under water.”

“That fixed all the imperfections in the pipes, but what it does is it reduced the inner diameter of the pipe,” he said, adding that the pipes were undersized to begin with.

At the time, Watson said Lake Michigan’s water levels were among the lowest on record. Charts from the U.S. Army Corps of Engineers Detroit District show that lake levels were below average between 1999 and 2014.

Since 2014, lake levels have dramatically increased. Lake Michigan’s level is now near the high-water mark set in 1986.

Watson said the storm-water system’s outlets into the St. Joseph River and into the canal off the Paw Paw River are now underwater.

“That means that they have water in them,” he said. “If you get an onshore wind ... water then pushes up that pipe. And what you see is a result of water pushes up the pipe to the lowest level on Main Street.”

O’Malley said he remembers when lake levels were at record highs in 1986. He recalled that water went over Riverview Drive and flooded the businesses on the other side.

“Water went roaring over the pier heads,” he said. “People losing property along the bluff has happened before.”

Making the matter worse is that the city doesn’t have accurate records of the storm water system, he said.

Schirripa said MDOT wants to be part of the solution, but other entities need to step forward to help.

He added there is no quick, easy fix.

“There’s going to be some short-term and some long-term fixes,” he said. “... We’re not at the ‘Here are the solutions’ stage. We’re at, ‘What is the problem’ stage.”

He said MDOT met with Benton Harbor and Berrien County officials last week to start the process of figuring out what to do. As the planning process moves along, he said business owners and other stakeholders will be asked to attend the meetings.

Meanwhile, Schirripa said plans to close the Blossomland Bridge for repairs this fall were put on hold until the flooding issue on Main Street is resolved, because Bicentennial Bridge serves the detour route – which is now periodically flooded.