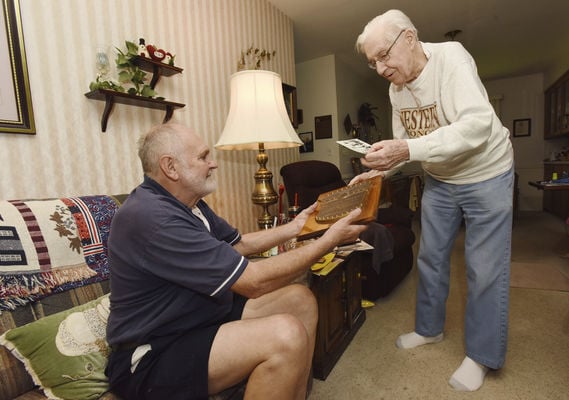 Arden Pridgeon, right, a retired professor at Western Michigan University, looks over old photographs and plaques with one of his former students, Horst Herzog, Tuesday at Pridgeon’s St. Joseph home. The two haven’t seen each other in more than 50 years. Pridgeon assisted Herzog by finding scholarships for the non-traditional student, who was a young refugee from Poland after World War II. 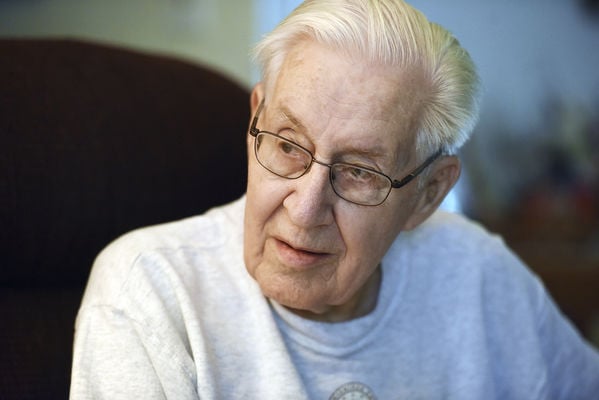 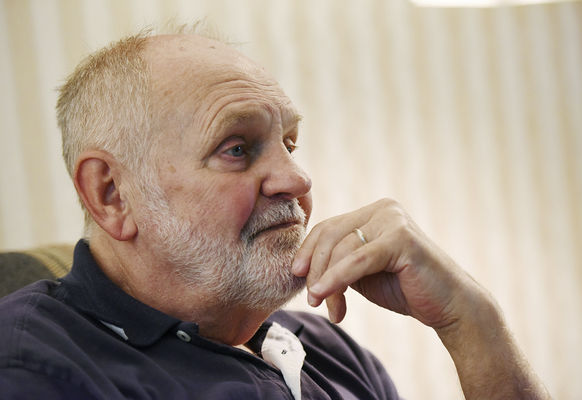 Horst Herzog, now living in Ohio, recalls his years at Western Michigan University learning under one of his professors, Arden Pridgeon, during a visit Tuesday. Herzog had a wife and three children as he tried to complete his education, commuting daily to the Kalamazoo campus. He went on to become a top engineer and executive with Ford Motor Co.

Arden Pridgeon, right, a retired professor at Western Michigan University, looks over old photographs and plaques with one of his former students, Horst Herzog, Tuesday at Pridgeon’s St. Joseph home. The two haven’t seen each other in more than 50 years. Pridgeon assisted Herzog by finding scholarships for the non-traditional student, who was a young refugee from Poland after World War II.

Horst Herzog, now living in Ohio, recalls his years at Western Michigan University learning under one of his professors, Arden Pridgeon, during a visit Tuesday. Herzog had a wife and three children as he tried to complete his education, commuting daily to the Kalamazoo campus. He went on to become a top engineer and executive with Ford Motor Co.

ST. JOSEPH — It often takes a dedicated educator to help steer a student toward a rewarding career.

For Horst Herzog, a young immigrant from Poland after World War II, that mentor was Arden Pridgeon, at the time an associate professor at Western Michigan University.

“He was the best teacher I had,” said Herzog, who on Tuesday had a reunion at Pridgeon’s St. Joseph Township home, 50 years after he graduated in 1968. “He took an interest in his students.”

The meeting came about following a Herald-Palladium article in July about Pridgeon’s WWII service, his career as an engineer and teacher, and the community activities he continues at age 95.

Herzog, a former Benton Harbor resident who now lives in Ohio with his wife, Sue, was sent a copy of the article by his brother, Helmar, who lives near Pridgeon. Herzog knew he had to take the opportunity to visit and say thank you.

“He made it a lot easier for me,” said Herzog, who was 30 with three children when he completed his college courses.

Nothing had been very easy for the Herzog family up to that point.

Herzog’s father, Albert, was drafted into the Polish army at the outbreak of the war, then captured by the Germans and sent into their ranks.

Horst was born in 1938 and was 7 when the war ended with the Allied victory in 1945. He recalls families in horse-drawn covered wagons trying to flee the war-torn country, including his own. But for some reason the Herzogs were sent back. (Herzog also remembers seeing the violin he didn’t like playing fall off the back of the wagon – he didn’t tell anyone about the lost instrument.)

In 1952 his mother, Else, heard about an immigration program that would take the family to America. His father, a stone mason, was reluctant to leave.

“I had a good job. I said, ‘I don’t need America,’” the elder Herzog said in a 2000 Herald-Palladium interview. “But I had two boys. I wanted to make a good home for them.”

They ended up on a Texas dairy farm, and later moved to St. Joseph, where they had friends. Albert Herzog went to work at Benton Harbor Malleable.

Horst was drafted into the U.S. Army, serving from 1956 to 1959, including 16 months in Korea. During his service, he met his future wife, a self-described “army brat” from Texas.

He hadn’t considered college when he left high school, but when he got out of the service he found out about classmates who had pursued higher education.

“I thought I was as smart as they were,” he said.

He started training at Whirlpool Tech, and then worked for the company for a couple of years as a sheet metal model marker. He took classes at Lake Michigan College, but an instructor told him he was “treading water” and needed to enroll in a university to earn an engineering degree. He considered Notre Dame, but couldn’t afford it, and opted for Western Michigan University.

With a wife and growing family, this meant sacrifices. Sue was working at Mercy Hospital as an admitting clerk, for 25 cents an hour. Her husband commuted to Kalamazoo with four other students, rotating their driving duties. When he had the car, his wife walked the four miles to work.

She remembered that he once was so tired on his ride home that he ended up lost on Territorial Road, and called to say he didn’t know where he was.

In stepped Pridgeon to smooth the way a bit. He had worked at Benton Harbor Malleable before taking the position of mechanical engineering at WMU, and knew Herzog’s father, who often bragged about his son.

Pridgeon admitted to being “an unorthodox teacher” who took the time to learn about his students and their ambitions.

He found scholarships for Herzog from numerous sources. Herzog completed his courses in one and half years, never taking fewer than 21 credit hours per session.

Pridgeon, who admits to being a pack rat, must have been impressed with his former charge. He still has one of the papers Herzog turned in, on the subject of “Light metal gating and shrink-bob riser design.”

He worked for the Ford Motor Co., and was sent to Mexico to start operations at three plants there. That project was so successful that he was transferred to Czechoslovakia to build plants there. From there he was assigned to the office in England, responsible for launching plants in South America, Spain, Portugal and France.

His last assignment was in India, opening plants there. When he retired he was the managing director of three companies, and on the board of directors of several others.

Herzog and his wife now live on Catawba Island on Lake Erie, near Sandusky. Coincidentally, Pridgeon’s son lives on nearby Marblehead Island.

Herzog and Pridgeon have something else in common, as longtime members of the Lions Club. Herzog gave Pridgeon his membership pin during their visit.

Pridgeon fought in the Philippines and on Okinawa during the war, earning the Bronze Star and two Purple Hearts. He is a charter member of Lest We Forget and continues to visit veterans, in his original uniform, at the hospice center.

What does Herzog think of the Americans and other Allies who freed Asia and Europe in WWII?

“I am an American,” he responded.

Did he think he would have become an American if they hadn’t made the sacrifices they did?