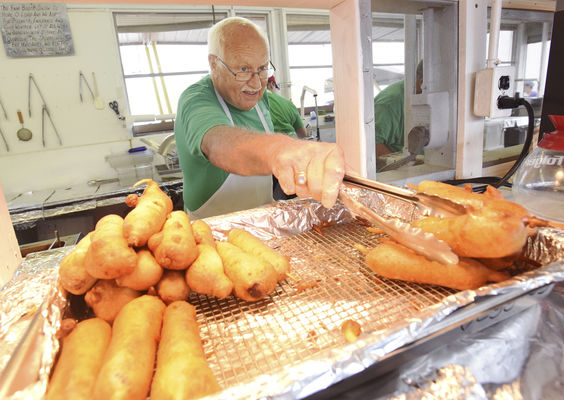 Bruce Stover works a shift at The Korn Dog Stand Tuesday at the Berrien County Youth Fair in Berrien Springs. Stover is also fire chief of the Berrien Springs-Oronoko Township Fire Department, which has various duties to perform at the fair. 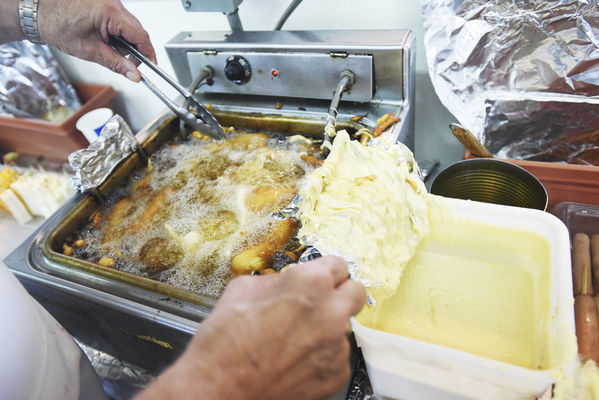 Bruce Stover handles a batch of corn dogs at The Korn Dog Stand. Stover typically spends every day, all day at the fairgrounds during fair week.

Bruce Stover works a shift at The Korn Dog Stand Tuesday at the Berrien County Youth Fair in Berrien Springs. Stover is also fire chief of the Berrien Springs-Oronoko Township Fire Department, which has various duties to perform at the fair.

Bruce Stover handles a batch of corn dogs at The Korn Dog Stand. Stover typically spends every day, all day at the fairgrounds during fair week.

BERRIEN SPRINGS — To say Bruce Stover is busy during fair week would be an understatement.

He’s on the fairgrounds from 8 a.m. to 11 p.m. every day, where he can be found overseeing the fair fire house, serving corn dogs at the Friends for Berrien Springs stand, or selling cookies at his daughter’s booth.

Most people know Stover as the Berrien Springs-Oronoko Township fire chief, a position he’s held since 1993.

During fair week Stover’s department is responsible for fire code inspections of every building and booth on the fairgrounds, with department members on site 24/7. Other departments also help out, supplying manpower and equipment.

While things mostly run smoothly during fair week, there have been memorable times such as when torrential rains hit during fair week in 2016. “We spent an entire night pumping water off the grounds that week,” he said.

“We’ve had major power outages, electrical fires, car fires and severe weather over the years. But we get through it all as we have a master emergency plan in place that police, fire and medical personnel work out with the fair,” Stover said. “Any given day, we have 20,000 people here. We have safe grounds because we have police and fire walking all over.”

When he’s not dealing with fire department-related problems, Stover is taking his turn at the Friends For Berrien Springs Korn Dog Stand. The stand is a fixture on the fairgrounds and is a place most fairgoers make a point of visiting each year for tasty and not-too-expensive treats.

This is his 45th year helping out in the Korn Dog Stand, which began with the Jaycees running it in 1965. He joined the Jaycees in 1975 and then was a founding member of the new organization when the Jaycees disbanded in 1981.

The Korn Dog Stand is the Friends’ only fundraiser during the year and allows them to promote the community and fund several youth and community activities, such as the Easter Egg Hunt in Berrien Springs, the band boosters organization, the parks and recreation program and the high school robotics team.

As Stover explains it, he and the 20 or so other members have the operation “down to a science.” They started setting up the stand last week, then work all week with help from more than 100 other volunteers before they tear everything down on Sunday. Their specialties remain the three kinds of corn dogs: all-beef, cheese and vegetarian.

He and other Friends members each put in six six-hour shifts, three during fair week – but three more right before and after to set up and tear down. The other volunteers come from local churches, schools and organizations and get a share of the proceeds for their groups according to how many hours they work.

Stover’s third job this week is to help his daughter, Kristina Burks, with the “Barbie’s Cookies” booth between the grandstand and the horse ring. Burks opened it last year to honor her mother and Stover’s late wife, Barb, who died in early 2018.

Burks decided to use her mother’s cookie recipes to make cookies to sell during fair last year and came back again this year.

Attending the fair is something that Stover has done his whole life. “I grew up in Berrien Springs and I’d walk down to the fair every day,” he said. “I usually showed crafts, like bottle boats and model aircraft. I always did enough to get a pass into the fair. I always came and then I started volunteering at the Korn Dog booth.”

Even with all his different jobs and duties, Stover takes time to visit with friends and neighbors and spend time with his three daughters and seven grandchildren when they stop by the two booths or just see him on the grounds.

But why does he keep doing it?

“It’s the people,” he said. “This is a great place and I have the chance to see tons of people while I’m doing something for the community. I love having the chance to see and talk to people I know, sometimes this is the only chance I get to see them all year.”

Stover began as chief in 1993, but first joined the department in 1982. The position became full-time in 2008. Before that Stover had also operated Schrader’s Supermarket, which he sold in 2007.

Here’s a look at what is taking place at the Berrien County Youth Fair over the last two days.