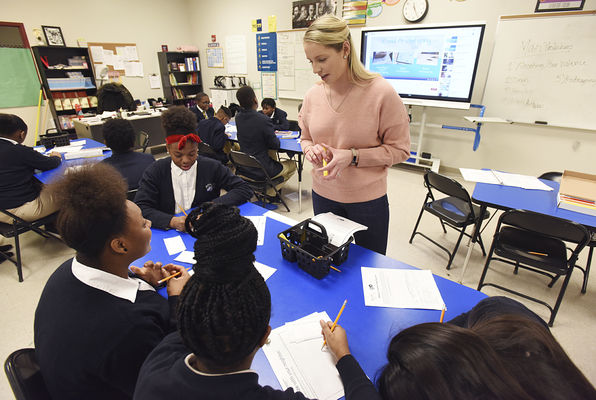 Meghan Kelly, a GIS project manager with Whirlpool Corp., works with students at Benton Harbor Charter School on Tuesday morning to develop apps as part of the goIT program. 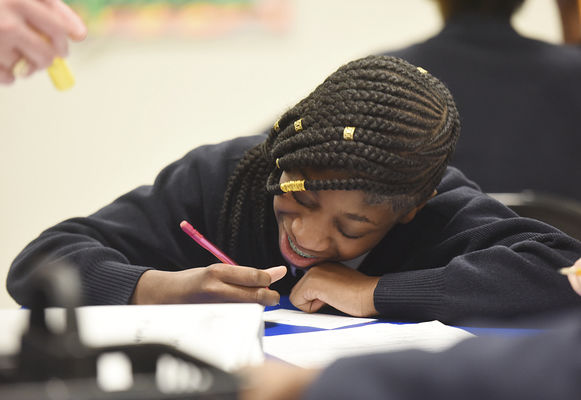 Nevaeh Levingston, 13, plans out the development of an app, as part of the goIT progam with Whirlpool Corp., Tuesday morning at Benton Harbor Charter School. 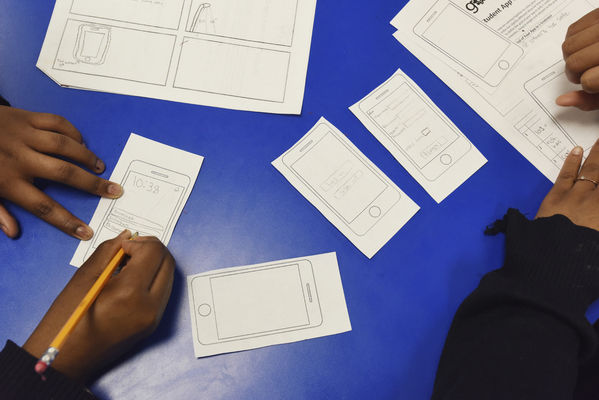 Students at Benton Harbor Charter School design the layout of apps as part of the goIT program with Whirlpool Corp., Tuesday morning. 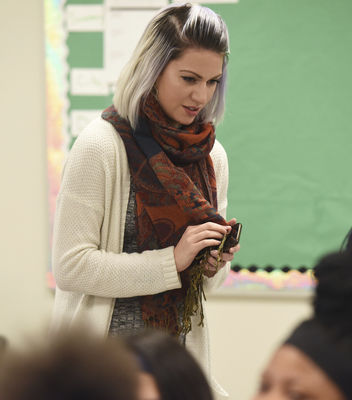 Meghan Kelly, a GIS project manager with Whirlpool Corp., works with students at Benton Harbor Charter School on Tuesday morning to develop apps as part of the goIT program.

Nevaeh Levingston, 13, plans out the development of an app, as part of the goIT progam with Whirlpool Corp., Tuesday morning at Benton Harbor Charter School.

Students at Benton Harbor Charter School design the layout of apps as part of the goIT program with Whirlpool Corp., Tuesday morning.

BENTON HARBOR — Nevaeh Levingston wishes there were no potholes in Benton Harbor.

While there is no easy way to fix them all, the 13-year-old student at Benton Harbor Charter School and a group of students might have a way around them.

On Monday during a special project, an idea was floated by a classmate to develop a mobile app to avoid the pesky potholes. The group quickly latched onto the idea and ran with it for their project that focused on computer science.

“Have you ever noticed how there are a lot of potholes in the street and it damages your car? Well, the app will notify you when a pothole is up ahead,” Nevaeh said. “It shows you where it is and gives you a different route.”

Nevaeh was among 120 students who were introduced to a computer science program/camp called goIT. The program was brought to the school by Whirlpool Corp. in an effort to help teach young students about STEM (Science, Technology, Engineering, Math) professions.

The curriculum for the program was introduced Monday and continued for another two days at Benton Harbor Charter School. About two dozen Whirlpool volunteers were on site at the school over the three-day period.

Hillary McDonald is a corporate social responsibility specialist who introduces goIT programs at schools across the country. McDonald said the program is a byproduct of Tata Consultancy Services (TCS), a company based out of India with a large footprint in the U.S.

The program, referred to as goIT, was founded in 2009 and has been brought to more than 25,000 students and 78 cities in the country.

Students start with basic concepts on what computer science is before moving on to understanding design thinking. After identifying a problem in the community, students are tasked with creating a mobile app to address the issue.

“I’ve been bouncing back and forth between classrooms providing support when teachers need my help,” said McDonald on Tuesday. “If they (teachers) want to continue running the program after we leave, they have the power to do that.”

All sixth- through eighth-grade students took part in the event. McDonald said this format is by design.

“The program is catered to a middle school audience. We want to introduce them to the concept of technology,” she said. “We’re not trying to drive them into coding just yet. We’re trying to put coding in context. We are a design, thinking and educational camp.”

Matt Meier, chief information officer for Whirlpool’s North America region, said bringing the program stemmed from a “Women in IT” event that Whirlpool volunteers took part in at the charter school last year.

“That went so well that we thought about whether there was something we could do on a larger scale,” Meier said.

The idea to bring the program to the school district began six months ago. With this week serving as test run at the charter school, Meier said the plan is to do the same exercise in three weeks at Benton Harbor’s middle school.

Meier said the biggest motivator for bringing the program to the area was to get students on board with dispelling the myths of what computer science is about.

“We’re about improving life at home and, by extension, the communities in which we live and work,” Meier said. “We are an industrial manufacturer and technology is inescapable. There’s a significant skill shortage in the market place for STEM-based skills. We want to spark an interest where there might no be interest otherwise.”

Savitha Venkitachalam, a global information systems manager at Whirlpool, chose to volunteer Tuesday because she likes the philosophy of giving students an idea of what the STEM field has to offer.

Venkitachalam and other volunteers with the Benton Harbor appliance maker went through an extensive one-day training session to learn the program.

“As an IT professional, it was refreshing for me because the problem-solving techniques we went through – ideation, prototyping and testing – I realized they could use this for pretty much any problem solving,” she said. “I like that Whirlpool is able to be part of this initiative. From an industry standpoint, we’re already doing this on a day-to-day basis.”

Eric Mancik, a GIS manager at Whirlpool, said he was blown away by some of the ideas students came up with in an effort to solve local problems.

In addition to developing an app to avoid potholes, some chose to focus on more serious topics like dealing with community violence.

“The overall theme is to be doing things that will help the community and some of the kids quickly connected,” he said. “I learned they are intimately aware of things that an adult would normally be more concerned about.”

*An earlier version of this article was corrected.