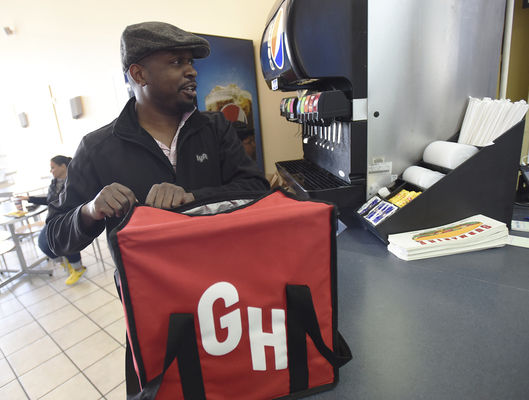 Courtney Hatterberry, a driver with Grubhub, chats with owner Lori Van Steen while picking up a customer's order at Baguette De France in St. Joseph on Friday. 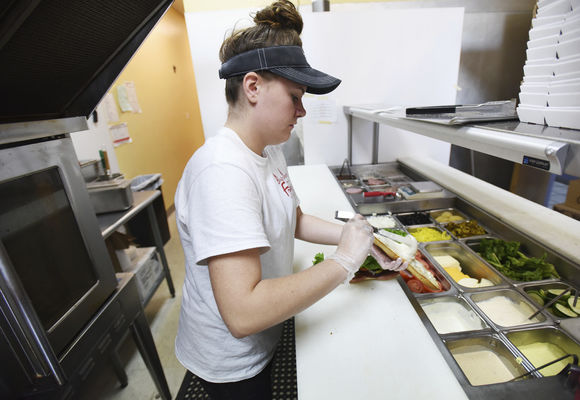 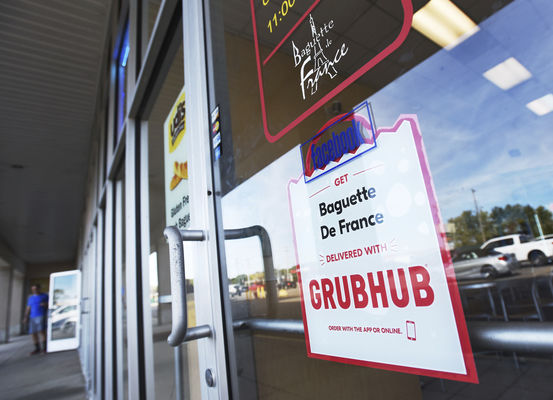 Baguette De France, in St. Joseph, is one of several area businesses that offer the Grubhub delivery service.

Courtney Hatterberry, a driver with Grubhub, chats with owner Lori Van Steen while picking up a customer's order at Baguette De France in St. Joseph on Friday.

Baguette De France, in St. Joseph, is one of several area businesses that offer the Grubhub delivery service.

Owner Lori Van Steen was approached by a Grubhub representative a couple months ago and chose to sign up.

“Three months ago they approached us,” she said. “They next sent an iPad and we had to do all the programming. In September they went live. And, for the most part, they have done their job.”

Grubhub, Uber Eats and DoorDash are on-demand food delivery services that partner with restaurants to deliver food directly to consumers. Over the past few months, these services have started popping up across Berrien County.

Grubhub is the market leader and processes almost a half million orders every single day. It’s the largest delivery option out there and serves more than 2,000 cities across the United States. However, Uber Eats has been rising in popularity.

At Baguette De France, Van Steen said her staff sees an average of five orders a day. But, she said it varies between lunch and weekends.

“I think some people are still leery,” she said. “I definitely think it will help as long as they can stay consist with picking up and delivering. It brings in a different clientele; the ones that are at home or don’t go out to eat. It’s another trend.”

However, one of the biggest trade-offs that comes with using the delivery service is the cost to businesses.

Grubhub and Uber Eats charge 30 percent on each order, which comes out of the business owner’s pocket. Others have complained about the timeliness of when a driver picks up the food.

“It’s quite expensive,” Van Steen said. “My least favorite part is that it can be inconsistent at times and customers get upset, when it’s out of my control.”

Since Grubhub went live in Berrien County in September, Villasenor said his eatery has averaged about three delivery orders a day.

The 30 percent charge associated with the service is a big negative for Villasenor, who said it can be a significant amount for a business that already works on the margins.

“The way they justify this is by getting you new business,” Villasenor said. “But at the same time, they ask you to advertise to your current customers that you deliver. It can sabotage your current business clientele. Why would you not encourage them to come to your place?”

To remedy this, Villasenor uses Grubhub to advertise their delivery option to people who have never eaten there.

“Let them get the customers for you. Don’t let them turn your customers into their service,” he said. “Once you establish these customers, you market to them with fliers in the bag with promotions of ordering directly to your site or through dine-in promotions.

“You’ve got to use each other. We need to use them for advertising and they use us to keep their business going.”

Being a fast-casual restaurant, Nola Roux and Grubhub seem to be a good fit.

As part of his business plan, Villasenor said he intended to introduce in-house delivery this fall. But when Grubhub approached him, Villasenor saw it as a way to test how customers would react to delivery.

“If there is a considerable volume and it makes sense for us to not pay as much on commission for our volume, it would justify getting an extra person to deliver ourselves,” Villasenor said.

Despite the sizable cost to use the service, Villasenor said he believes it will be beneficial in the long run to restaurants.

“I think it will help. Especially now that the winter season is upon us,” he said. “Customers would rather stay in and eat indoors. I think the price would be worth it in the winter.”

More of the chain restaurants and franchise stores, like McDonald’s, Taco Bell, Bob Evans and Sonic use Uber Eats. But that’s mostly because those same national chains use them in larger markets.

DoorDash is slightly different from the other two delivery services in that orders must be made over the phone – not online.

Reactions to DoorDash have been mixed.

DoorDash underwent a trial in the region to test the market, unknown to several restaurants. Among those surprised by orders coming in was Van Steen.

“DoorDash put me on their site without asking. They never reached out to connect with me,” she said. “They were missing half of our items. They were misrepresenting our restaurant.”

“There’s been a lot of ups and downs. We’ve worked our way through it. Unfortunately, they don’t know our menu very well,” Van Liere said. “It’s hard and inconvenient for us. We want it to be right and make sure the order is perfect. We’re nervousness when it comes to how they represent our menu.”

Van Liere said they also have the occasional problem with drivers. Sometimes it takes DoorDash an hour to locate an available driver. In those cases, Van Liere said they are forced to dispose of the food and remake it when the driver eventually gets there.

While Coach’s doesn’t have its own delivery service, Van Liere said they offer a pick-up service called Sideline Services.

“I would love to be able to get a delivery team here. But that’s a lot for us to undertake,” she said. “I think it will help. This is the way the industry is going. Plus, it’s allowing us to get our food out there.”