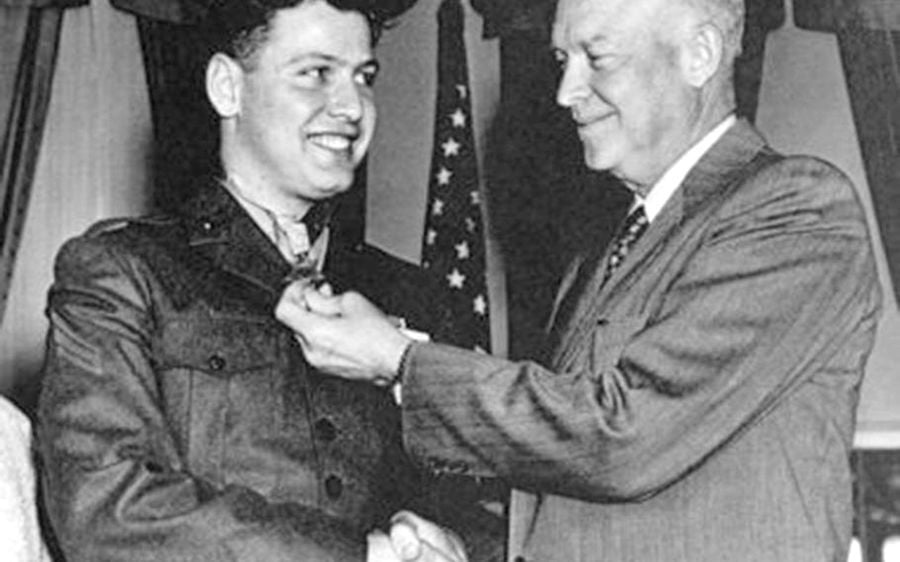 Marine Cpl. Duane Dewey is shown receiving the Medal of Honor from President Dwight Eisenhower at the White House on March 12, 1953. 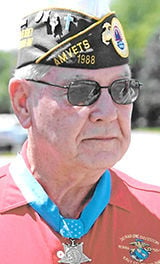 One of the last surviving veterans of the Korean War and Medal of Honor recipient who lived in South Haven after returning home from the war, has died.

Marine Reserve Cpl. Duane Edgar Dewey died earlier this week in Saint Augustine, Fla., at the age of 89, according to the Marine Corps Times. His funeral service is scheduled Oct. 22 in South Haven. He will be buried in Florida.

Dewey is one of three military veterans from South Haven to have received the military’s highest honor for bravery during battle – the Medal of Honor. The other two are Vietnam War veteran James McCloughan and the late Civil War veteran William Wilcox.

Dewey received his Medal of Honor in 1953 from President Dwight Eisenhower after nearly losing his life in 1952 after jumping on a grenade to save fellow Marines during the Korean War. Eisenhower referred to Dewey as having a “body of steel” when awarding Dewey the medal.

Dewey, who was serving as a Marine corporal, was engaged in combat near Panmunjom, Korea in April 1952 when an enemy grenade landed close to his position. Even though he had already been wounded from the previous evening’s enemy attack, Dewey shouted a warning to the other Marines around him and then smothered the grenade with his body, absorbing the full impact of the explosion to save his comrades.

Born in Grand Rapids, Dewey grew up in Muskegon and came to South Haven at the age of 17. Two years later, after marrying his wife, Bertha (Bierhalter), he enlisted in the Marines.

In 1953, after recuperating from his life-threatening injuries, he returned to South Haven where he and Bertha raised two children, Dwight “Ike” and Arlene. In 1973, Dewey and his wife moved to Irons near Baldwin, where the couple had owned a hunting cabin. Several years ago, they moved to Florida, full time.

Although he lived in Irons after retirement and later Florida, Dewey made a point of returning to South Haven for special ceremonies hosted by the American Legion Post 49.

“We have a photograph of him and the other two Medal of Honor recipients hanging in our main hallway,” said Jason Turner, post commander. A memorial honoring Dewey also stands in front of city hall, along with other memorials honoring military veterans from South Haven who died in the line of duty in World War II, the Korean War and Vietnam War.

Yet, even for earning the military’s highest honor, Dewey remained a humble person when attending honorary functions hosted by the American Legion Post in South Haven.

Adjutant Tom Breen talked to Dewey several times during his visits. “He never mentioned it,” Breen said referring to Dewey being a Medal of Honor recipient. “If you didn’t know he had received it, you wouldn’t know.”

Vietnam veteran Glenn Higgs of South Haven, who got to know Dewey well over the years, agreed.

“I spent a lot of times with him up North, hunting and fishing,” said Higgs, whose parents knew Dewey and his wife, Bertha, and their two children, while they lived in South Haven.

Although Higgs’ parents knew Dewey and his family well, Higgs didn’t get to know Dewey well until after serving as a Marine in the Vietnam War. Higgs had been in the the U.S. Marines for less than three months in 1968 before being severely injured.

“There were 21 of us who were going to be reinforcements north of Da Nang. When we got there I stepped on a mine,” said Higgs during an interview in 2018. “When we were down after the explosion that set off another one. Out of 21 people, 11 were wounded and two died. I was fortunate.”

When he returned home after recovering from his injuries, Higgs had lost use of both of his legs and had to be fitted with prosthetics which he still uses to this day.

“We talked a lot,” Higgs said of Dewey who would visit him after he returned to South Haven. “We told each other War stories. He was good with helping my morale. He was just there for me. I was heart broken when I was told by Arlene that he had died.”

Arlene Broome has fond memories of growing up in South Haven. In fact, after her parents sold their home to move to Irons, she later purchased it after it had been bought and sold to several different people over time.

The house holds special meaning for her.

“When my dad got back from Korea he and my mom rented an apartment with my dad working at Everett,” Arlene said.

It was while working at Everett that Dewey received notification he was to be awarded the Medal of Honor from Eisenhower.

“A lot of veterans worked at Everett. They were excited when they found out,” Arlene said. “They got together and set up the ‘Dewey Fund.’ They collected enough money to buy a lot, build the home and have it furnished. There was even canned goods in the cabinets. When my dad got back from Washington D.C. to receive the medal there was a big parade in town. The parade brought my parents to their new home.”

Arlene remembered that while growing up her dad was “gruff and stern with me and my brother.” As she got older, she came to appreciate her upbringing.

“My dad was always a hard worker. He instilled discipline and hard work into my brother and I.”

She never knew much about the significance of her father being one of the few military veterans in the United States to earn the Medal of Honor.

“He never ever talked about his medal,” Arlene said. “When I was growing up I knew he had a medal in a box in his top drawer. I didn’t come to the realization of what it was until I was in high school taking history and the teacher talked about the Korean War...I learned more about the meaning of the medal at school than from my dad.”

During her adult years, however, her dad did share some of his wartime experiences with his offspring.

“With more books written about the Korean War and information available on the Internet, my dad would open up more about it at home,” Arlene said. “But it never clicked with me until I was in high school the importance of what he did and that he was in a league of only a few to receive the Medal of Honor.”