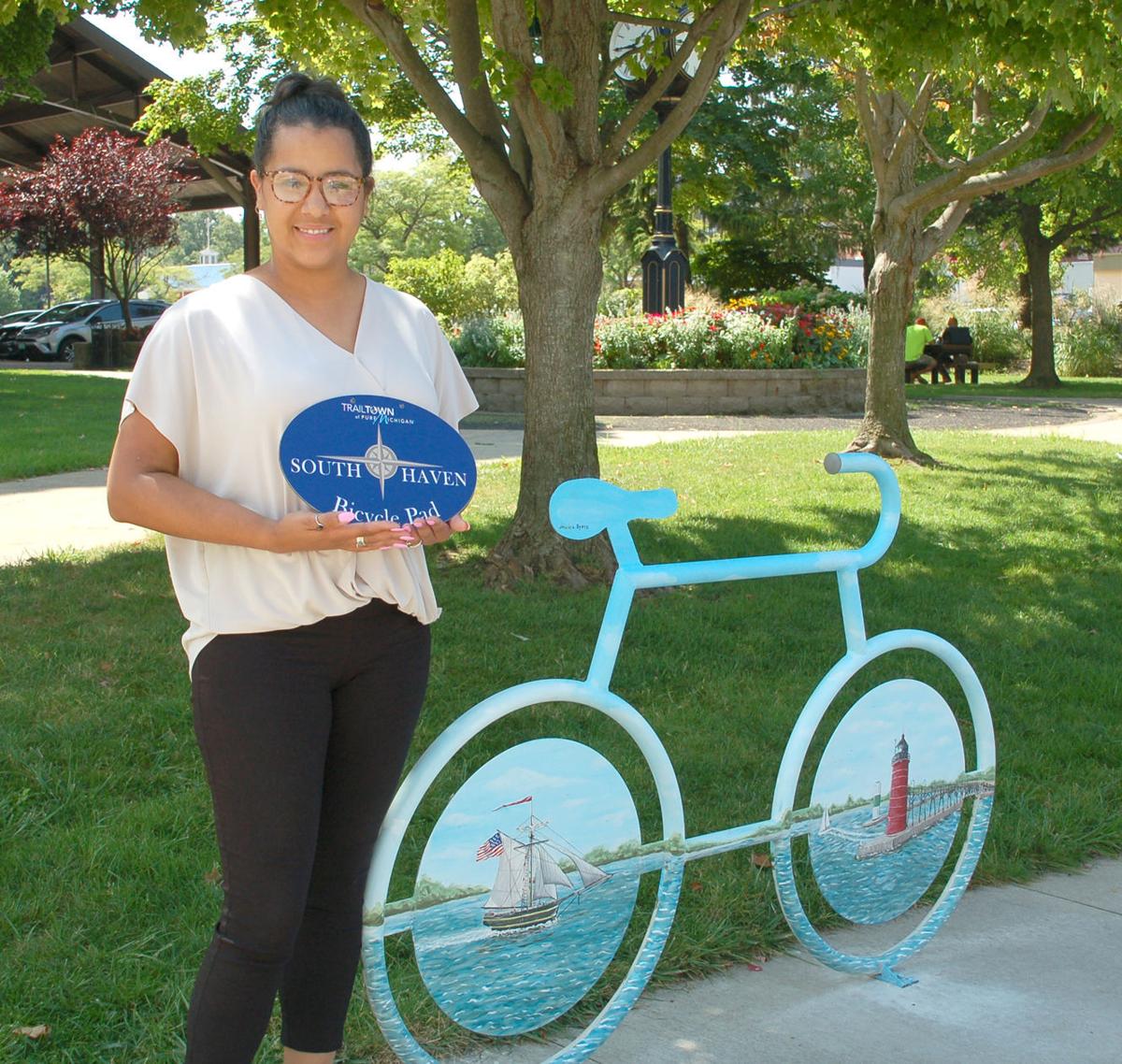 Jen Sistrunk, executive director of the South Haven/Van Buren County Convention and Visitors Bureau, stands next to one of the decorative bike racks that are being placed in downtown South Haven to increase the number of racks where bicyclists can park their bikes. 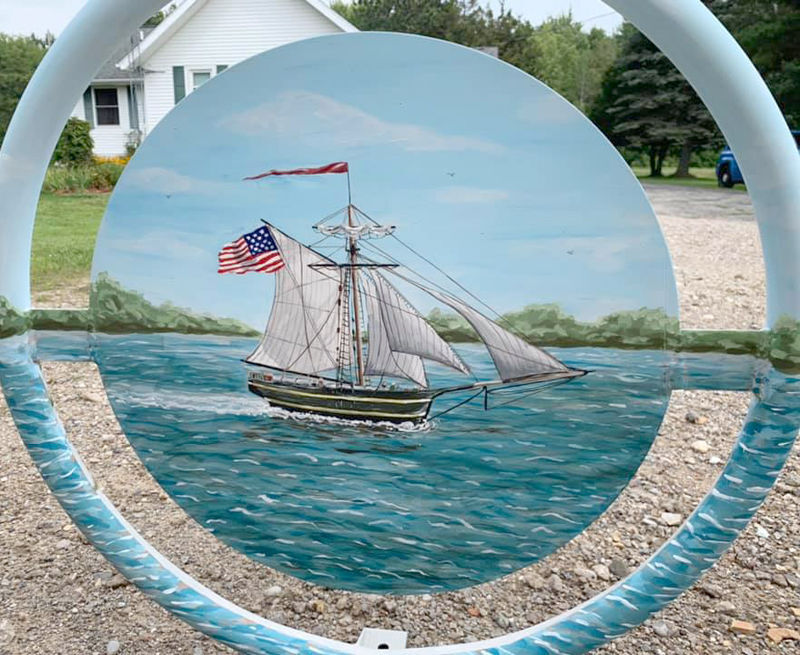 Jen Sistrunk, executive director of the South Haven/Van Buren County Convention and Visitors Bureau, stands next to one of the decorative bike racks that are being placed in downtown South Haven to increase the number of racks where bicyclists can park their bikes.

In most downtowns, bicycle racks are pretty much nondescript; often made of grey or black metal, shaped into thin bars to lock bikes in place. Except for bicyclists looking for a spot to park their bike, the racks are overlooked by most people.

In South Haven, however, that may soon change. Eighteen new bicycle-shaped metal racks, decorated by artists throughout the South Haven area, are now being rolled out to various locations in the city's downtown business district.

Three of the decorative racks made their debut earlier this week, including Kelly Vander Kley's orange-color bike rack, "Fly Away With Me." The rack's artwork conveys her memories each year of seeing Monarch butterflies near the beaches of South Haven getting ready to make their annual migratory flight to Mexico.

"This bicycle rack is decorated with various overlapping Monarch wing patterns as a salute to the journey the frail winged creatures will make and a nod at the journey we all must make through our experiences in life," Vander Kley wrote in her artist statement. "The bold orange will surely provide a splash of color to the community," she added.

Vander Kley's rack can be seen on Williams Street, while Aron Lowe's multi-colored rack, along with Jessica Byers' have been installed on Phoenix Street near Dyckman Park.

For her bicycle rack, Byers chose to depict landmarks and attractions unique to South Haven, such as the historic lighthouse, Friends Good Will tall ship and the sand dunes overlooking Lake Michigan at Van Buren State Park

"I chose to highlight a few important parts of South Haven in hopes that when tourists walk by and see that (the bike rack) they will visit these areas, learn some history and admire all the work artists have done for our little town," Byers said.

More of the racks will soon be installed at other downtown locations, said Jen Sistrunk, executive director of the South Haven/Van Buren County Convention and Visitors Bureau.

"They will all be installed before the weather turns, taken out before winter and then re-installed when the weather gets warmer in the spring," Sistrunk said.

The decorative bike rack project came about earlier this year when the Visitors Bureau wanted to install more bike racks downtown as part of the city's designation in 2020 as one of the state's first "Pure Michigan Trail Towns," due to the close proximity of the Kal-Haven Trail, Blue Star Trail and Van Buren Trail to South Haven's downtown business district. South Haven earned the Trail Town designation because of the community's efforts over the past several years to create a system of streets and smaller trails that connect larger trails, such as the Kal-Haven Trail, to downtown shops, restaurants and attractions.

"The bike rack project falls in line with our efforts to encourage use of the trails and spending time downtown," Sistrunk said.

The Visitors Bureau could have purchased more of the black "M-style" metal racks that already dot the downtown streets, but decided to do something different.

The bureau partnered with the city's Downtown Development Authority and the South Haven Center for the Arts to create unique-looking bike racks in keeping with the art center's goal of promoting more permanent artistic structures downtown. The DDA agreed to help fund the project, along with the Visitors Bureau, while the art center agreed to commission artists to paint the racks.

"We really relied on the Center to the Arts to facilitate the painting of the racks," Sistrunk said. "The DDA's support was really nice."

Looking at the artists' bike rack designs, Hagy said she is pleased with the results of the collaborative project.

"I am excited for how the project came together and for how many super talented artists we have right here in South Haven and Van Buren County, and am grateful to the DDA and Visitors Bureau for funding a project like this that allows the art center to work with and feature all this amazing talent," Hagy said.