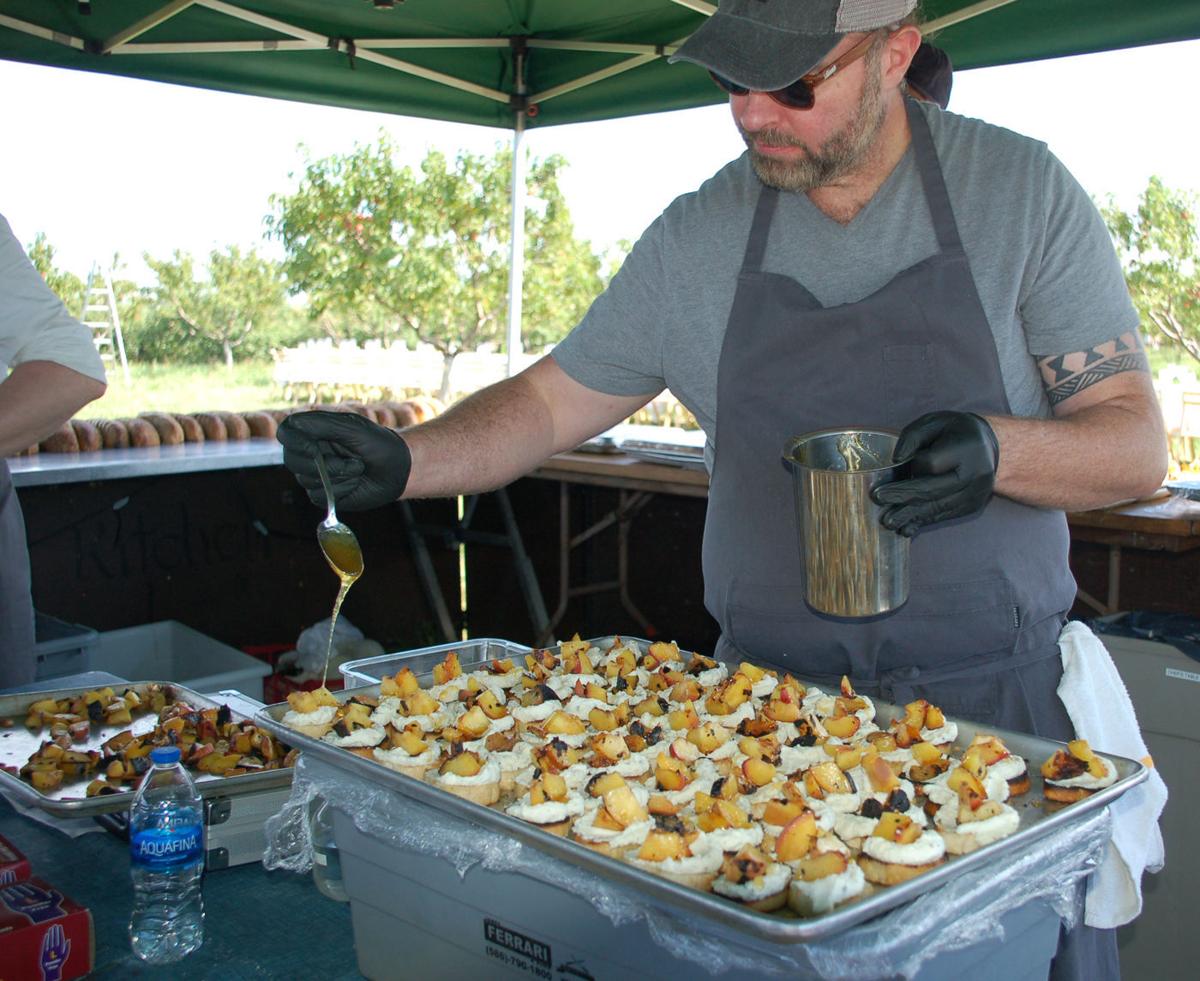 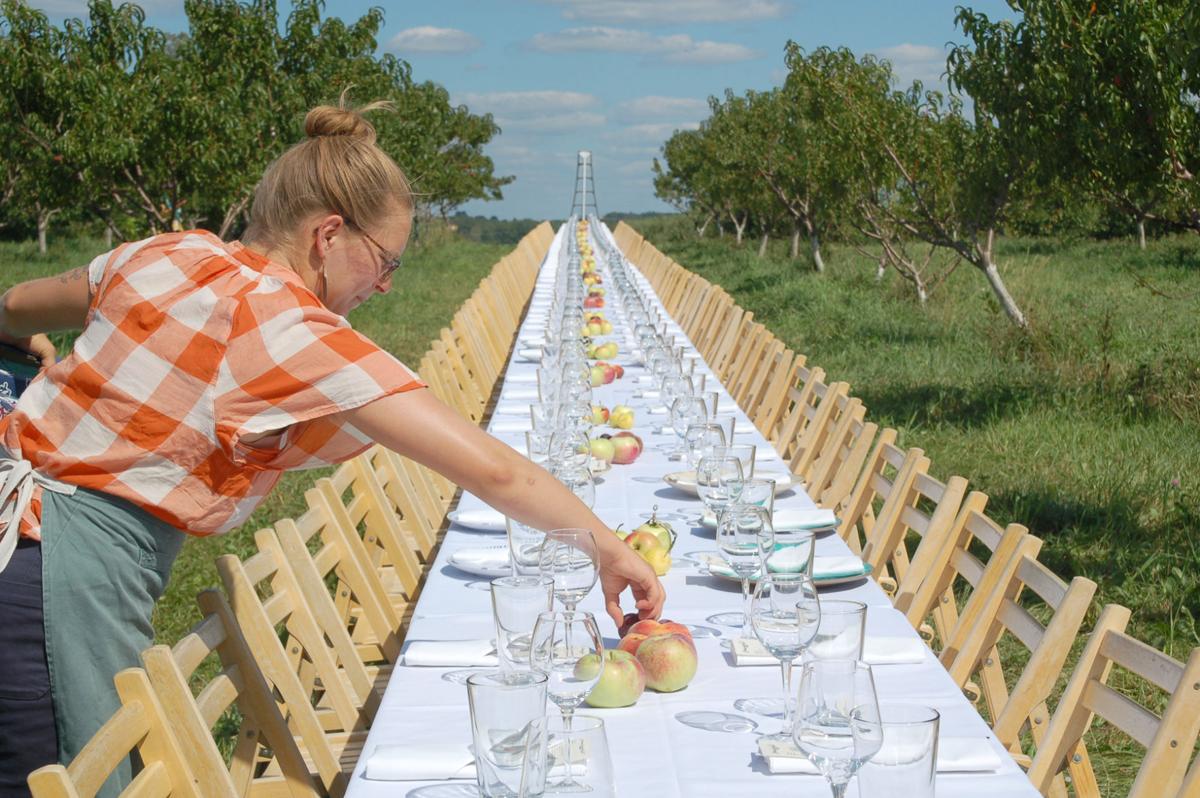 Emma Turner sets fresh fruit on the table in preparation for the 150 guests taking part, Sunday, Aug. 15, in a large outdoor meal at Seedling Farm in Casco Township. Seedling Farm is one of the outdoor settings utilized by Outstanding in the Field, which organizes large-scale pop-up meals and gatherings throughout the United States each year. Seedling Farm hosted two of the meals at its orchards on Saturday and Sunday. The meals were attended by approximately 300 diners.

Emma Turner sets fresh fruit on the table in preparation for the 150 guests taking part, Sunday, Aug. 15, in a large outdoor meal at Seedling Farm in Casco Township. Seedling Farm is one of the outdoor settings utilized by Outstanding in the Field, which organizes large-scale pop-up meals and gatherings throughout the United States each year. Seedling Farm hosted two of the meals at its orchards on Saturday and Sunday. The meals were attended by approximately 300 diners.

Earlier this month, Peter Klein hosted 150 guests at an elegantly set dining table in the middle of his apple orchard.

Klein’s historic 80-acre fruit farm was one of the settings chosen this year by Outstanding in the Field for its yearly pop-up dinner series. The series has resumed its circuit after canceling its stops in 2020, due to the COVID-19 pandemic.

Now in its 22nd year, Outstanding in the Field arranges more than 200 epic outdoor dinners each year throughout the United States and 16 countries.

For nearly a decade, Klein’s Seedling Farms in Casco Township has been chosen as one of the outdoor dinner series’ stops in the Midwest.

Klein said his Southwest Michigan farm is regularly chosen thanks to the wide variety of produce he grows, including apples, cherries, peaches and pawpaws.

“I’m not sure if I reached out to them or they reached out to me,” Klein said. “But about eight years ago they came out and liked us. Now, they come here twice a year to prepare dinners.”

California resident Jim Denevan founded Outstanding in the Field in 1999, as an alternative to upscale, conventional indoor dining experiences so that he could connect diners to locally sourced food prepared onsite by chefs.

The Aug. 14th and Aug. 15th four-course meals at Seedling Farms consisted of fresh ingredients and products from 16 farms, wineries and restaurants throughout the Midwest – with 12 from Michigan.

The stone fruit, figs, raspberries and tomatoes used for several of the appetizers and desserts came from Seedling Farms, while the Unity Vibration Bourbon Peach-brined pork rack, slow cooked and roasted over the coals, came from Utica Farms.

While diners enjoyed each course, they sipped on Michigan-made wines, paired for each dish.

Diners were able to enjoy their elegant meal outdoors, while also getting a glimpse of the chefs preparing the meal.

Battle Creek native Thomas Lents, executive chef for the upscale Apparatus Room at The Detroit Foundation Hotel in Detroit, led a team of other chefs in creating the meal at Seedling Farms.

Klein met Lents four years ago when he was an executive chef at Sixteen Restaurant in Chicago, before returning to Michigan in 2017.

“He was one of my customers,” said Klein, who markets much of his produce to Chicago businesses, including restaurants. “He’s all about focusing on farms and the people of the Michigan area.”

Lents, who has become known for his large-scale meals, served family-style at The Apparatus Room, said it is satisfying to prepare cuisine featuring local ingredients and products.

“We try to do as much with surrounding farms as possible,” Lents said.

The epic meals created for the Outstanding in the Field series are by no means inexpensive. The freshly prepared four-course meal, wine and farm tour cost $285 per person.

But, for couples such as Bill and Kim Alm of Kalamazoo, the dinner and ambiance is worth the splurge.

“This is our fourth time with Outstanding in the Field,” Kim said. “We just love the dinners.”

The Alms first took part in the series when Kim turned 60. Her husband wanted the birthday to be special. So they booked two tickets for an epic outdoor dinner that was prepared on the beach at Big Sur, Calif.

“It’s not so much about the food,” Bill said. “It’s also about the experience and getting to meet different people.”