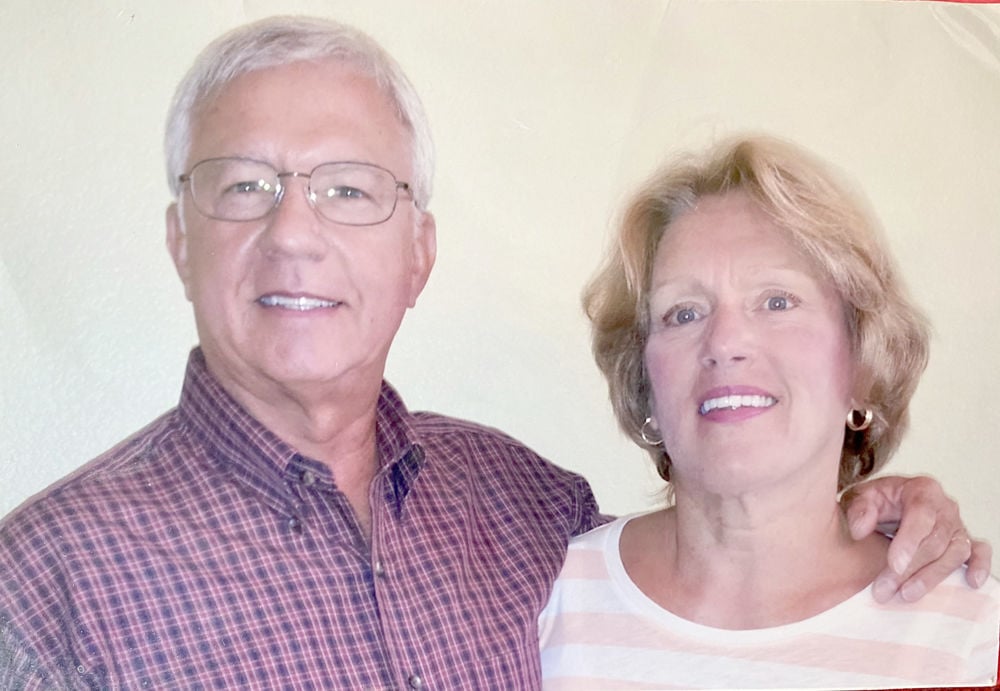 Charles and Barbara Skuza of Kalamazoo are shown in the above photo. Charles, 73, was shot and killed in a random shooting on Aug. 20 on the South Pier in South Haven. His wife also was shot, and was taken to a Kalamazoo hospital in critical condition. 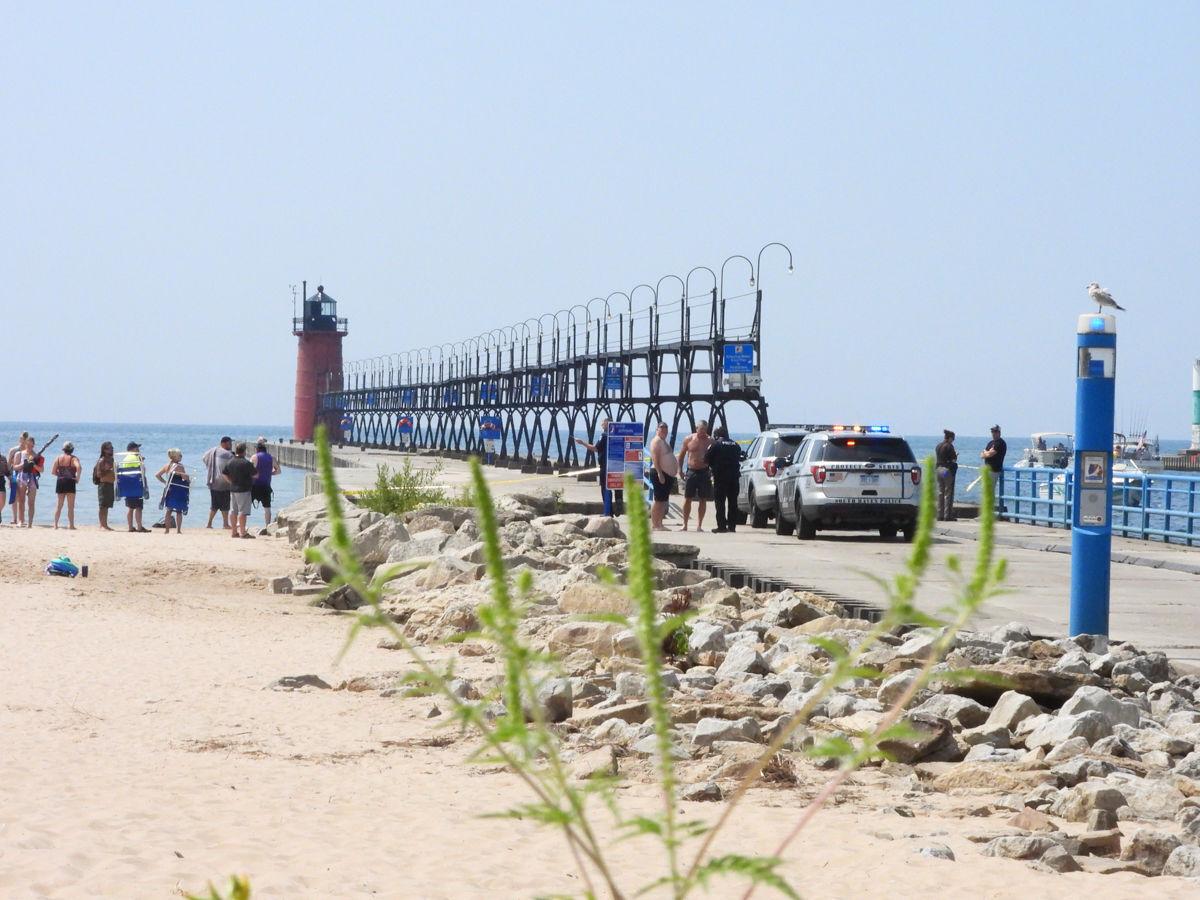 Charles and Barbara Skuza of Kalamazoo are shown in the above photo. Charles, 73, was shot and killed in a random shooting on Aug. 20 on the South Pier in South Haven. His wife also was shot, and was taken to a Kalamazoo hospital in critical condition.

During the hot, summer days of August, people head to South Haven’s beaches to seek relief from the heat. Some cool off in the waters of Lake Michigan, others sit under umbrellas on the beach, while some walk along the water’s edge, dipping their feet in the cool lake. Children enjoy playing in the nearby splash pad while older adults enjoy watching the boats while strolling along the Black River channel’s two piers, especially the South Pier with its historic, red lighthouse.

Such was the case during the early afternoon hours of Friday, Aug. 20 for Charles and Barbara Skuza. The coupled traveled from their home in Kalamazoo to stroll along the beach and South Pier, something they enjoyed doing quite often.

But as the couple enjoyed their walk, tragedy struck.

Shortly after 2 p.m., Aidan Ingalls, a 19-year-old man from Bangor, armed with two handguns, shot the couple before turning the gun on himself and committing suicide. Charles, 73, died on the pier, while his wife suffered critical injuries and was rushed to a Kalamazoo hospital, where, as of last week, she was struggling to survive.

When the shooting began, beach video cameras captured the image of beachgoers running from the beach toward their vehicles. Some hid behind the protective walls of temporary erosion revetment walls, looking over the top of the structures to get a glimpse of where the shots were coming from.

Leo Flory of South Haven was sitting outside at the American Legion Hall that overlooks the channel and Lake Michigan when the shooting started.

“It was about 2 p.m. as we enjoyed the sun, heat and breeze coming from the lake,” he said. “Amidst our chatter, I heard the sound of pop, pop, pop-pop-pop. Pop, pop-pop. Pop.”

Flory had served in the Vietnam War. He was accustomed to hearing gun shots, but often heard them at much closer range than from where he was sitting on the bluff.

“I first thought about the irregularity of the ‘pops,’” he recalled wondering about the source of the noise. “A semi automatic weapon may not be that irregular? a revolver may be that irregular? Fireworks are usually set off in someone’s backyard, not in a public place? It’s a beautiful day, sunny, festive, some kid is shooting off his firecrackers in an inappropriate place?”

But what Flory heard wasn’t fireworks, as he was to find out minutes later.

It was shots fired from a 9 mm handgun by Ingalls.

Rhonda Dobberstein watched the incident unfold on the News 8’s Horizon video camera used to capture images of the pier and South Beach.

“My heart shuttered as I watched a video from the camera showing people running in fear trying to protect themselves and their children, she wrote in a post on the South Haven Happenings social media site. “How terrifying it must have been as many were running towards the entrance of the sand barrier wall which was putting them closer to danger. It was like a scene from a movie.”

Police were quickly on the scene, cordoning off the pier and nearby places. Other first responders were tending to the shooting victims, and later that day South Haven Police, in a news release, identified the shooter as Ingalls.

Upon hearing news that Charles Skuza had died and that his wife was clinging for life in a hospital, family members were at a loss for words.

“They went for a walk on the beach, then walked on the pier,” Charles’ brother Barry Skuza told News 8 on Monday, three days after the tragedy occurred. “Hundreds of people do it every day.”

Skuza went on to say his brother was a retired biologist, who had met his wife, a nurse, at the same hospital where he worked. The couple married in 1974 and went on to have four daughters.

“He was a good guy, got up and went to work every day, and honest to everybody,” Skuza told News 8.

It took the family of Charles and Barbara Skuza several more days to respond to the shooting incident.

In a statement submitted to the Tribune and other news outlets, the family stated: “We are devastated beyond belief over the loss of our beloved father and we continue to pray for the recovery of our mother who we hold very dear. We are forever thankful for the first responders, doctors, and nurses who acted courageously to save our mother’s life. We wish to extend our gratitude to the medical staff continuing to provide critical care and encouragement to our family. We stand in solidarity with the community. We will not be defeated by senseless violence. Thank you for your prayers and for respecting our need for privacy during this difficult time.”

On social media posts throughout last week, people wondered how someone could walk on such a public place as the South Pier and shoot randomly at people and then take his own life. Even Barry Skuza who when interviewed by News 8 stated, “I don’t know what to say. It just gets you. You can’t spot mental illness just looking at somebody. You just can’t. You don’t know what to say.”

Ingalls, however, had a prior history of trying to do harm to other people.

Several years ago he had written in a journal of his intent to harm others.

Law enforcement personnel seized the journal in March of 2018 after Ingalls – who was 15 at the time – went to the Van Buren County Sheriff’s office with his mother, after she and her boyfriend found guns and ammunition in the boy’s bedroom.

The journal detailed his plans to shoot students and bomb Paw Paw High School, where he had been recently enrolled. The journal, said Susan Zuiderveen, an assistant prosecutor with the Van Buren County Prosecutor’s office at the time, also detailed mutilation and killing of animals and his intent to shoot people at the popular Fourth of July holiday fireworks show in South Haven.

“The journal was very disturbing,” said Zuiderman, who now is the chief prosecuting attorney for the county.

After learning of Ingalls’ intentions to go on a shooting spree at Paw Paw High School, Zuiderveen, who prosecuted the case, wanted to try Ingalls as an adult; charging him with possession of explosives with intent to target a vulnerable target, one count of possession of bombs with unlawful intent and eight other weapon-related charges.

However, Van Buren County Judge Jeffrey Dufon ruled Ingalls should be referred to juvenile court after hearing testimony from the defense that with intensive therapy, medication, structure and family therapy, Ingalls could become mentally healthy.

According to Herald-Palladium news archives, Dufon said that the prosecution had the burden of proving by the preponderance of evidence that the best interest of the juvenile and the public would be best served by an adult designation.

“This is not just all on public safety. That is only one part of this,” he said. “Almost all of (Zuiderveen’s) arguments were dealing with protecting the public. ... Even she indicated that he could get the same (mental health) treatment in the adult system as he could in the juvenile system. Equal does not mean preponderance.”

After being sentenced to a juvenile residential treatment facility in Gaylord in June of 2018 to receive in-house mental health counseling, it appeared Ingalls was doing better. He remained there for a year and then was released to the custody of his grandparents in Bangor, where he lived for the last two years.

While at the residential treatment center, Ingalls obtained his GED, a family member stated two years ago.

Earlier this year, Lake Michigan College records indicated he had been named to the winter semester dean’s list at LMC, where he was enrolled as a part-time student.

He also was employed at the Big Boy restaurant in South Haven for the past two years.

But when he was released from probation July 20 of this year, it was only a month later on Aug. 20 when he went to the South Pier and shot the Skuzas before taking his own life.

The Tribune reached out to Ingalls’ family members last week, but they declined comment at this time.

Police continue to investigate the incident and what may have led to Ingalls’ fateful actions. They obtained items from the vehicle Ingalls was driving and are also working with the FBI to find out where Ingalls had obtained the handguns used in the shooting incident.

Posts from area residents on social media sites gave mixed reactions to the shooting. Several stated that Ingalls should have been tried as an adult; that the judicial system had been too lenient with him. Comments similar to those voiced by law enforcement personnel at a press conference last week.

“What took place was not a shock to a lot of us,” said Van Buren County Sheriff Daniel Abbott. “We hope this (news of the shooting) goes nationwide. We hope and pray this case prevents another one from happening.”

Other people on social media speculated that Ingalls must have been bullied as a student. His mother claimed in 2018 that he had been, however, Paw Paw school officials stated at the time that was not the case; something they still continue to say.

Rick Reo, who is now superintendent of Paw Paw Public Schools, said he examined school records to determine if Ingalls had reported being bullied.

“There is not not evidence bullying was going on,” he said during last week’s press conference.

Yet, Reo acknowledged that Ingalls was having difficulties adjusting to being a new student at Paw Paw.

“He was taken under the wing of peers who volunteer to help new students. He was provided support.”

Apparently, though, the support from the volunteer peers and residential treatment in Gaylord wasn’t enough for the troubled youth. It caused some on social media to say that there should be more help for people suffering from mental and/or emotional illnesses.

“This is so awful from all sides,” Beth Bocock posted on the South Haven Happenings Facebook site last week. “Our family is praying for the female victim who at last report was in critical condition in Kalamazoo, the couple’s family who is struggling with the senselessness of this loss and tragedy, and the young man’s family ... Imagine if someone in your family needed help, you tried, and this still happened. Compassion doesn’t cost anything.”