Watervliet’s Riley Hess (back) and South Haven’s Roderic Yelding battle for control in the 171-pound match of Wednesday’s district championship at Coloma. Hess won the match. 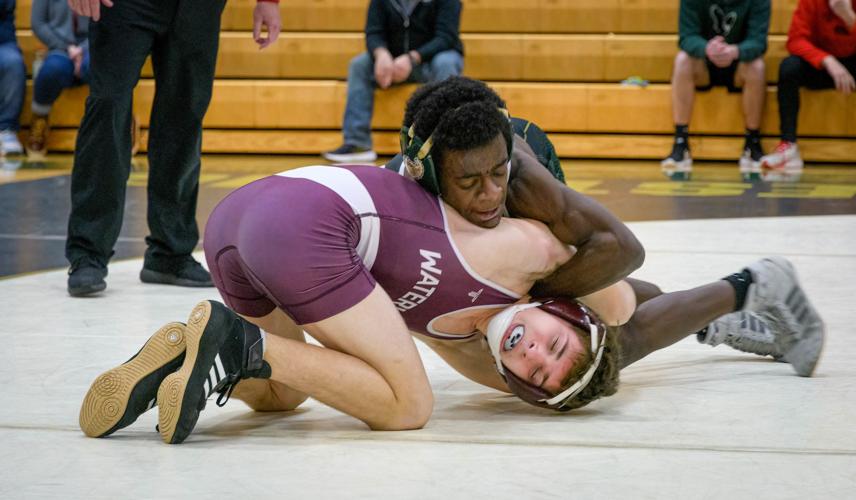 Watervliet’s Riley Hess (back) and South Haven’s Roderic Yelding battle for control in the 171-pound match of Wednesday’s district championship at Coloma. Hess won the match.

COLOMA — Watervliet got past its Division 3 wrestling roadblock on Wednesday, defeating South Haven 46-36 to claim a team district title.

The Panthers last claimed a district crown in 2019, when they were in Division 4. They were eliminated by the Rams the last two seasons.

"We're very happy," Watervliet coach Joe Isbrecht said. "This is our first district win since we moved up into Division 3. We've been chasing (South Haven) for three years now. It's always a battle when we go against them."

Watervliet, which defeated Coloma 60-18 in the semifinals, will host a Division 3 regional next Wednesday. The Panthers will face the winner of today's district at Buchanan, where Dowagiac is the favorite. The other semifinal will pit defending regional champion Constantine against Otsego.

"It's going to be exciting just to bring a home match to Watervliet for something big like this," Isbrecht said. "We're probably going to go up against Dowagiac first. We matched up with them OK at the beginning of the year. We've made some adjustments and we're going to see what happens."

South Haven led for most of the final match, which started at 145. Two forfeits and a pin by Jeremy Rowland at 160 gave the Rams a quick 18-0 advantage. The teams then alternated winning matches through 112 pounds, but Watervliet took the final five to surge ahead for the title.

"We knew they had solid middle weight classes," Isbrecht said, "but we knew our lower weight classes is where we needed to come through, and they came through for us. A big match for us tonight was Kameron Smith."

Smith scored an 11-2 major decision over Mikey Yelding at 130 in the only match to go the full six minutes. South Haven then forfeited the final two contests.

"There's not a lot of secrets between us and Watervliet," South Haven coach Brad Adamson said. "It's pretty easy to see throughout the season where we're all going to be at. I think we knew coming in it was going to come down to what weight we drew and even the flip of the coin to determine who had to showcase first. It didn't go our way."

The Rams won the district the past two seasons and were strong regional contenders, losing by a point to Constantine in last season's regional final and by two points to eventual champion Dowagiac in the 2020 regional semis.

"We had a lot of injuries that impacted us pretty quickly," Adamson said. "We had a big senior group that graduated last year. We knew we were going to have a little uphill battle, it just seemed to get worse and worse with the injuries that took place over the season.

"The good news is we're real optimistic looking forward to next year. We'll get those guys back and we've got a large group of freshmen coming in. I think we'll be right back where we want to be pretty quickly."

In the semifinal, Coloma won three of the five contested matches, but Watervliet took the match easily by picking up eight forfeits. Comet winners were Jacobie Bonds (189), Matt Martel (112) and Caeleb Ishmael (135). The Panthers got pins from Luke Isbrecht (103) and Alejandro Reyes (285).