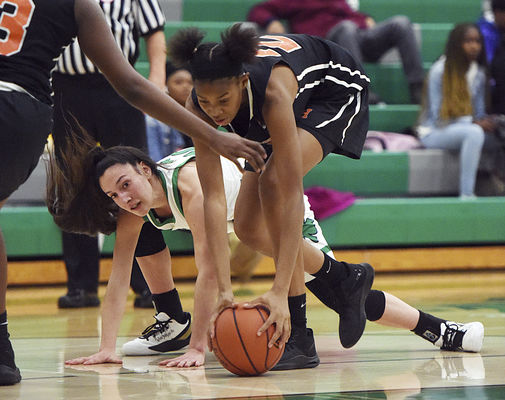 Benton Harbor’s Desrae Kyles scoops up a loose ball while defended by Berrien Springs’ Maggie Griffiths during the first half of Thursday night’s game. 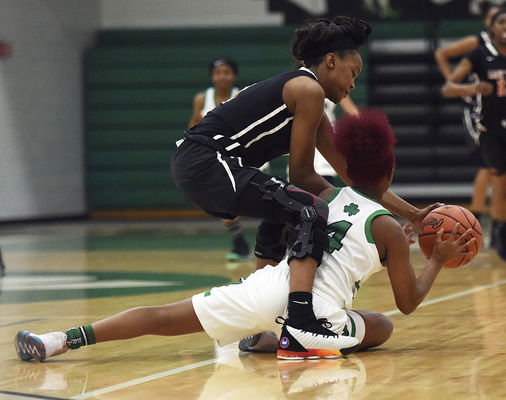 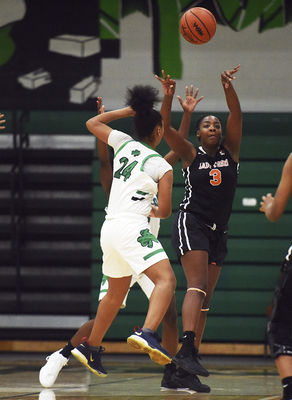 Benton Harbor’s Shaliya Perkins passes while under pressure from Berrien Springs’s Taneya Shivers during the first half of Thursday night’s game. 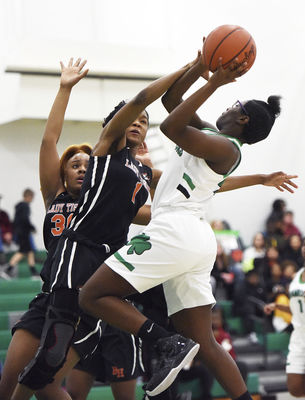 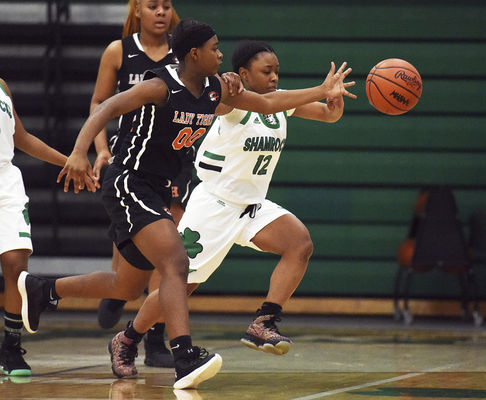 Benton Harbor’s Desrae Kyles scoops up a loose ball while defended by Berrien Springs’ Maggie Griffiths during the first half of Thursday night’s game.

Benton Harbor’s Shaliya Perkins passes while under pressure from Berrien Springs’s Taneya Shivers during the first half of Thursday night’s game.

The Tigers erased a pair of deficits in the second and third quarters before eventually pulling ahead and hanging on in the fourth to win 32-26 over the Shamrocks.

“I felt we were able to continue to build after the first quarter,” said Tigers coach Kenneth Jackson. “Our defense early gave me some confidence. I felt that, even if we were down, we can always do something to come back. All we had to do was make a couple correct plays.”

Benton Harbor (2-6) trailed Berrien Springs (4-4) early, as the Shamrocks took advantage of 14 Tigers turnovers in the first half.

The Tigers led 9-8 briefly in the second after a free throw and a bucket on the ensuing possession from 6-foot-4 freshman Desrae Kyles, but the Shamrocks closed the half scoring nine of the last 13 points to regain the advantage.

From there, however, the Tigers’ switch to a 1-2-2 zone slowed the Shamrocks down significantly in the second half.

After putting up 17 in the opening half, the Shamrocks scored just nine total points in the second half.

If not for a Hillary Dortch three-pointer that cut the Tigers’ lead in half at 23-20 with under a minute remaining in the third, Benton Harbor would’ve kept the Shamrocks off the board entirely in the third quarter.

“We got some open looks out of (Benton Harbor’s switch to the zone), we just couldn’t get a basket to drop,” said Shamrocks coach William Eichberg. “We missed some layups that were open. I know we’ve struggled in the past with the zone. We got some open looks, they just didn’t fall there at the end.”

In the fourth, the Tigers moved the score to 27-22 after a rebound and score by Kyles.

Hillary Dortch responded with a quick three for the Shamrocks, but a free throw from Benton Harbor’s Shaliya Perkins followed by back-to-back baskets by Kyles and Jmya Jordan moved the score to 32-25, giving the Tigers their biggest lead of the game and essentially sealing the win.

Kyles and Jordan, a senior guard, handled a majority of the scoring for the Tigers, with Kyles finishing with 14 and Jordan 12. Both players also grabbed eight rebounds apiece.

Jackson said he was particularly impressed with the efforts of his freshman center.

“Desrae came up big,” he said. “Once we could break the press and get it past half (court), we could get it into our bigs and that’s where we had an advantage.”

Taneya Shivers scored five for the Shamrocks, with Kym’meisha Ellis-Davis adding four, all on free throws.

Eichberg noted the playoff-like atmosphere of the game in a rematch of last season’s Division 2 district championship game, a 35-33 win for the Tigers.

“Both teams wanted it,” said Eichberg. “They’re all friends, so they all wanted to win. It was a fun game to watch. Both teams got after it. We left it on the court, and as a coach that’s what you ask for.”