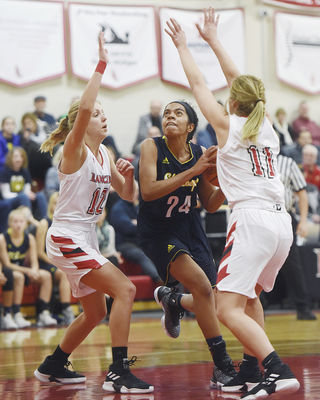 St. Joseph's Alex Malone looks for an opening against Lakeshore's Jayden Schmaltz, left and Emily Waning during a game last year at Lakeshore. 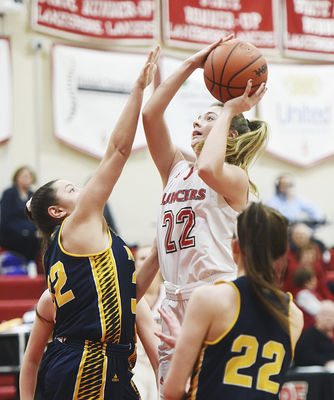 St. Joseph's Alex Malone looks for an opening against Lakeshore's Jayden Schmaltz, left and Emily Waning during a game last year at Lakeshore.

Leading the way for St. Joseph will be senior Alex Malone and junior Symone King. Malone led the team in both scoring and rebounding last season. The duo returns to anchor what figures to be a strong frontcourt for the Bears.

"(Alex) has gotten a lot better," St. Joseph coach Tracey Bloodworth said. " We expect her to be one of the best players in the conference. She's going to play on the perimeter a lot more this season, she's that versatile. Symone has come a super long way. She's a lot more physical and aggressive and can run the floor and defend well.

"You're going to see a lot of good things from them."

"Mae has come in and done a nice job," Bloodworth said. "She knows how to make her teammates better. She knows her role will be different this year but she's all-in. (Leah) is one of our glue kids that keeps everyone together. She's a very unselfish player and can play post for us as well."

"(Emma's) come a long way and takes a ton of pride in her game," Bloodworth said. "She's put a lot of hours in the gym this summer. Maya is another competitor who is driven. She's been knocking down shots and playing with confidence."

Forward Karly Klaer and guards Caroline Veine and Avery Blomgren figure to see key minutes on the court as sophomores.

"Karly is an ultra-competitive kid who can move and defend," Bloodworth said. "She's coming off an injury but should be a good leader for us. Caroline and Avery Blomgren are both good athletes and competitors. Those kids are playing super."

The Bears need to find consistent scoring to ease Malone's load but a new offense should help matters.

"We're playing much more up-tempo," Bloodworth said. "Spacing is better and we're moving the ball better as a team. I'm excited about the versatility that this roster will bring us."

Lakeshore is hoping to take the next step after finishing 2-15 last season. The Lancers graduated eight players from last year's team, but bring back key seniors in forwards Morgan Tillman and Hollee Hercik. Tillman was an all-conference selection and led the team in scoring and rebounding last season.

"Last year was a rebuilding year for us," Lakeshore coach Michael Clark said. "We had our fair share of struggles. This is a young team but we have hard-working players here. Morgan will play a big role in our success this year. Hollee missed part of the season but has had a good offseason.

"We're excited to see what she can do."

Junior Olivia Trivedi was brought up for districts last year and figures to be a key rotation player for the Lancers this year. Reneigh Sandmann returns for her junior season after sitting out her sophomore season due to injury.

"We're excited to have (Olivia) on varsity full time," Clark said. "She's a great all-around player and we look forward to seeing how she'll develop. Reneigh is a great athlete with nice length. We're excited to see her back on full strength."

Jaden Schmaltz and Riley Pifer made the varsity team as freshmen last year and are hoping for increased roles. Senior Ella Jeske will be counted on for her length on defense.

"Both of them have a good shot of finding their way into the lineup," Clark said. "They have a ton of potential and great work ethics. Ella will bring a lot of defensive fire for us. She is incredibly quick and gets out there and pressures the ball."

The Lancers will lean on their defense to fuel their offense to start the season.

"It's an athletic group," Clark said. "I expect us to go out there and compete defensively. It's not an easy way to play. When you're trying to put pressure on the team, it's difficult. Hopefully, the defense can lead to some easy offense.

"I can't stay where we are right now. We need to grow no matter what the results are if we want to compete at the district level."

Niles placed third in the SMAC West standings under head coach Jessica Johnson and expects to compete near the top of the division again.

Alycia Patterson returns as one of the area's best players. The senior point guard was an all-state honorable mention and an all-conference honoree last season, averaging 14 points per game for the Vikings.