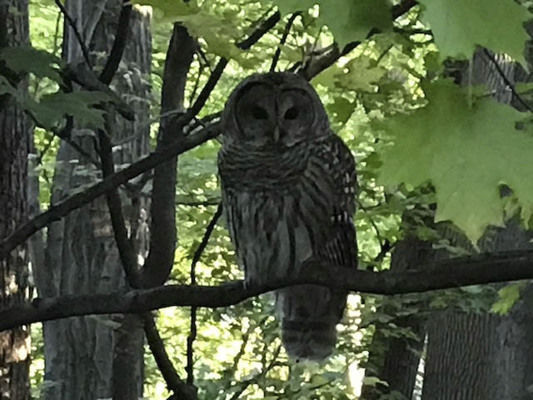 A barred owl sits on a tree in a wooded ravine in Royalton Township. 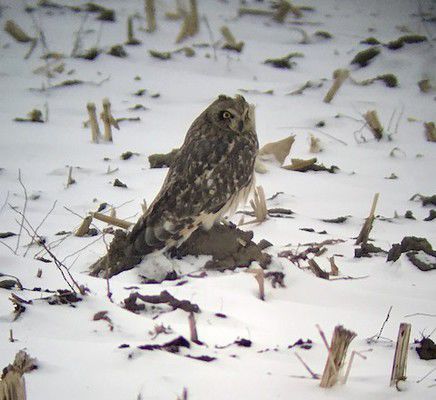 Short-eared owls are often found on the ground, as was the case on November 14 when Mary Jo Canaday of Berrien Springs found this one just south of Linco Road near South Scottdale.

A barred owl sits on a tree in a wooded ravine in Royalton Township.

Short-eared owls are often found on the ground, as was the case on November 14 when Mary Jo Canaday of Berrien Springs found this one just south of Linco Road near South Scottdale.

A short-eared owl was found on November 14 at the corner of Linco and South Scottdale roads in Oronoko Township by Mary Jo Canaday.

The short-eared owl is a bird of the grasslands and spends most of its time on the ground, where it feeds and nests. It was more common in the region when small farms where more prevalent. During the late 19th and early 20th centuries, most farms in our region contained pasture land for grazing, and fallow fields, which suited the short-eared owl.

After World War II, the number of small farms declined, and at the same time harsher pesticides and herbicides came into use, resulting in fewer short-eared owls and other grassland species.

The short-eared owl can be found sparingly in the Great Lakes states during summer. No recent summer records exist for Southwest Michigan, but the species still migrates through the area in spring and fall.

The bird located by Canaday is likely migratory, as middle November is when the species historically passes through heading south.

Denise Foust of Royalton Township sent me photos of two species of owls this past week. One was an eastern screech owl that Foust noticed roosting in a tree in her ravine. The owl is a gray phase bird. Screech-owls can be either gray, or a reddish-brown color.

Screech owls do not migrate. They are present throughout the year among woodlots, residential areas, and parks. Since eastern screech owls avoid large expanses of unbroken forests, they were not common prior to European settlement, because forests covered most of Michigan prior to the 1830s.

When the forests were cleared, screech owls increased and have adapted quite well to both the agricultural and suburban landscapes.

The screech owl is the most common owl in the region. It stands  about eight-and-a-half inches tall. Its distinctive ear tufts, which are actually tufts of feathers, are sometimes referred to as “horns”.

Foust also sent me a photo of a barred owl, taken on October 18 in the woods behind her home. The barred owl prefers large forest tracts, and its presence is indicative of a healthy mature forest ecosystem. Within the last 20 years, barred owls have returned to the forest corridor along the St. Joseph River after decades of being absent. Additionally, second-growth forest along the river has resulted in the return of the pileated woodpecker and red-shouldered hawk, as both are dependent on large mature forests.

The barred owl does not migrate, and generally stays within a mile or two of its nesting site even in winter. The barred owl is named for the vertical bars on its chest, and is the only owl in eastern North America with black eyes.

For the past several weeks I have been mentioning a late ruby-throated hummingbird which has been visiting a feeder of Madeline Johnston of Berrien Township since November 1. Johnston tells me the bird was last seen just before 10 a.m. on November 14, surviving the snow and cold of November 11-12.