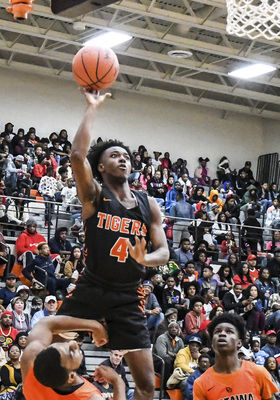 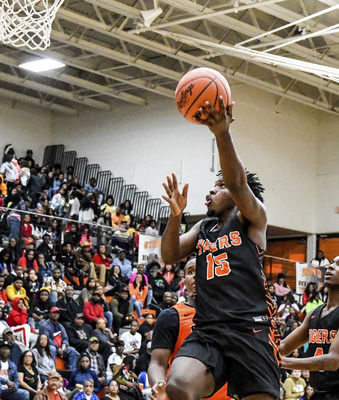 BENTON HARBOR — Kentrell Pullian dominated the first half and Carlos Johnson took over in the third quarter as Benton Harbor rolled to a 91-64 boys basketball victory over Grand Rapids Ottawa Hills to win the Earl McKee Holiday Classic on Saturday.

Johnson finished with 28 points and 15 rebounds, both game highs, and Pullian scored 19 of his 25 points in the first half to help the Tigers easily win their own tournament.

"We just played lights-out today," Benton Harbor coach Corey Sterling said. "This was one of our better games of the season. We wanted to come out focused to win this Christmas tournament because this is for our fans. Benton Harbor's a struggling city, but this is their big show. They come out dressed real nice. I appreciate the community for coming out. We haven't lost a home game in three years."

Redford Union defeated Parchment 59-46 in the first game of the evening. Ottawa Hills (2-2) impressed in an 85-49 win over Parchment on Friday, but couldn't keep pace with the home team.

Benton Harbor (5-0) never trailed as Pullian sank 3-pointers on the Tigers' first two possessions. Both were the result of good team ball movement, but Pullian later displayed the ability to create his own shot, using some slick dribbling to set up two fourth-quarter 3s that fired up the crowd. He finished 6-for-7 from beyond the arc.

"A breakout game for KP," Sterling said. "We knew he could do this all along. Today was really a spark for him, and I'm looking forward for him to play like this from now on."

Benton Harbor led 42-28 at halftime. Johnson had just nine points midway through the third quarter before going on a tear that started with an alley-oop dunk off a pass from Quindarius Davis. He followed with a 3-pointer and then a 3-point play, scoring 16 of the Tigers' final 18 third-quarter points as they extended the lead to 69-39.

"He tweaked his back in the first quarter," Sterling said. "He fought through it, and I knew it would loosen up for him. Now we've just got to get him some treatment for it."

Davis finished with 12 points and six assists. Joe Johnson had a strong game inside with 11 points and eight rebounds. The Tigers had a size advantage and used it well, outrebounding Ottawa Hills (2-2) by a 48-31 margin.

"Joe's been struggling for a minute," Sterling said, "but he texted me this morning and said 'Coach, I got you today on the double-double.' We took advantage of our size. Grand Rapids' tallest player was like 6-3. Joe Johnson was able to use his strength and get in position to get rebounds."

Carlos Johnson was named the tournament MVP and was joined on the all-tournament team by Pullian, Davis, Hawkins, Parchment's Tony Williams and Redford's Braylon Allison.

Benton Harbor retired the football jerseys of former standouts Joique Bell and Steve Neal prior to Friday's game. Bell wore No. 33 and Neal wore No. 10.

Bell, a 2005 graduate, starred as a running back at Wayne State University in Detroit, where he won the Harlon Hill Trophy as the best player in NCAA Division II football. He then went on to play in the NFL, rushing for more than 2,000 career yards accumulated mostly during a four-year stretch with the Detroit Lions.

Neal graduated from Benton Harbor in 1995 and then played at Western Michigan, where he was among the best wide receivers in school history, earning all-Mid-American Conference honors three times. Neal is now a scout for the Detroit Lions.

Former Benton Harbor girls basketball standout Laticia Morris had her jersey number retired at Friday's game. Morris scored 1,536 points during her career with the Tigers before going on to play college basketball at Auburn.