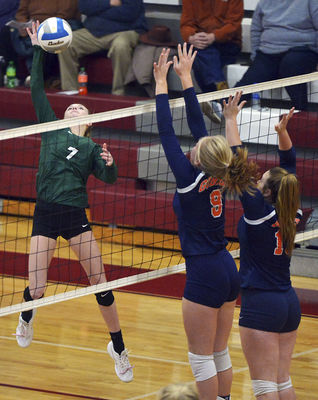 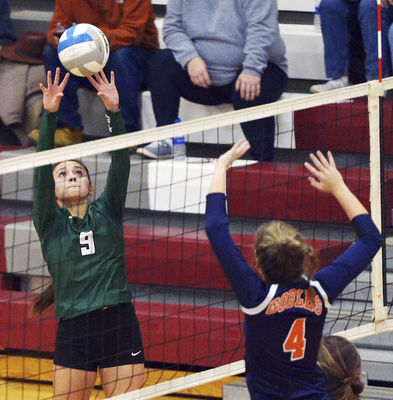 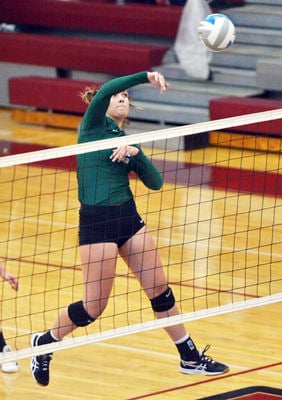 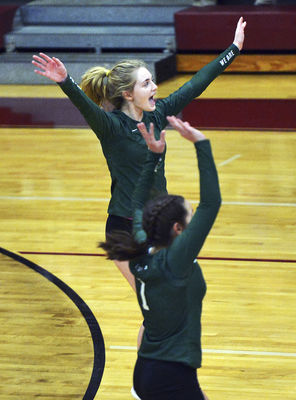 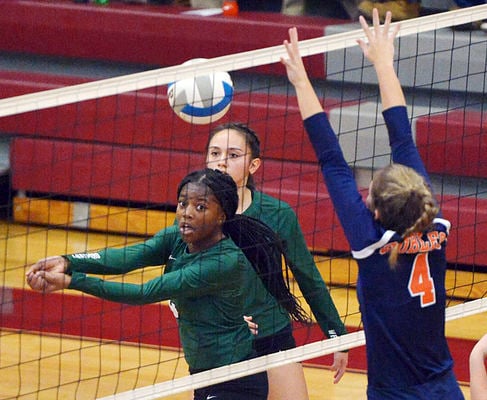 WATERVLIET — Hartford’s volleyball team was able to play Gobles close in Thursday’s Division 3 district finals match, but too many Tigers scoring runs kept the Indians from winning a district title.

The Tigers advance to next Tuesday’s regional semifinal at 5:30 at Schoolcraft, where they’ll see either Bridgman or Brandywine. The Bees and Bobcats square off in another Division 3 district championship at 10 a.m. on Saturday at Lawton.

In Thursday’s matchup, Hartford (12-35) had opportunities in the first two sets. In set one, the Indians trailed 11-9 before Gobles scored nine of the next 10 to take a 20-10 lead.

A similar tune was played in set two, where Gobles turned a 10-10 tie into a 20-13 lead after another big scoring run.

“We just had a couple of mental breakdowns,” Hartford coach Patty Matheny said. “We needed to stay up, stay positive. The girls just weren’t working together fully as a group. They got frustrated with themselves, and that really hurts your momentum in the game of volleyball.”

The teams traded blows until the Tigers took control with a 21-16 lead. Up until then, neither team had led by more than three points en route to a 16-16 tie.

Madi Brady had two straight kills with the score knotted at 16-16 to give the Tigers a slight edge. After Christiana Hunt turned a blocked Hartford shot into another Gobles point, Brady added another kill to make it 20-16.

Hartford got as close as 23-20 after Alexis Snodgrass scored a kill that came off an assist by Megan Nelson, but Gobles’ Libbee Nason picked up the Tigers’ 24th point on a kill, then Emily Baxter sealed the win with an ace that squeaked just inside the right out-of-bounds line.

“We were making adjustments,” Matheny said on the Indians’ third set. “They were staying positive and working together, and that makes a difference. We just needed to be able to do that the whole time.”

Gobles served well all night, as the Tigers tallied 12 team aces, including six in the first set.

Tigers coach Renee Rambadt said she felt any of the five teams in the district could’ve had a realistic shot at winning the championship.

“This year I felt the draw across the board, everyone kind of had a fair chance coming in,” Rambadt said. “The girls worked really hard pushing through. A lot of times, we would fight, but just not be able to get over that edge. Tonight I said to them, ‘It’s the end of the year, so push hard. We’ve got to get over that hump to take the next step.’”

The Tigers had a variety of players make in impact, with Brady tallying seven kills on the night to lead the team. Karlee Henderson added six kills, with Nason and Hunt each adding five.

The Indians were led by Nelson’s seven kills. She also added two assists, a dig and a block. Jordan Ariah and Lainey Goodson played solid defensively for Hartford, with each player picking up eight digs.

Gillian Kuehnle and Karla Robles each had five digs.

“They’re a really good group of girls,” Matheny noted as the season ends for Hartford. “(Megan Nelson), she’s our top hitter. It’s going to be sad to see her go, but these girls are kind, considerate. At practice, they are always working hard. They’re a great group.”