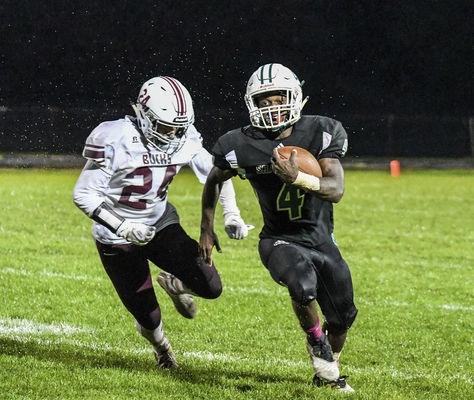 Berrien Springs’s Danny Vinson breaks a tackle for a long gain against Buchanan on Friday. 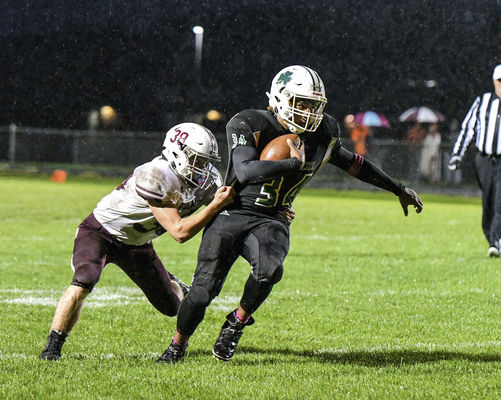 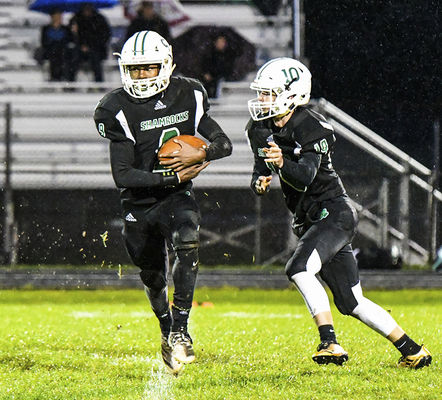 Berrien Springs’s Danny Vinson breaks a tackle for a long gain against Buchanan on Friday.

BRIDGMAN — Berrien Springs’ football team got a competitive first half from Berrien-Cass-St. Joseph Conference Red Division rival Buchanan before pulling away in the second.

A rainy first half created issues on offense for both teams. With the weather clearing up after halftime, the Shamrocks’ offense took off, scoring 21 points in the third to pull away from the Bucks in an eventual 40-0 win in a game played at Bridgman.

The victory gives Berrien Springs its fifth straight BCS Red championship. The Shamrocks have gone 15-0 against conference opponents in that span.

“They just have bought in over the past few years and just stuck together,” said Shamrocks coach Bill Bergan on the team’s conference dominance. “They’ve been in the weight room, they don’t miss workouts, they trust each other and really just play as a team. That’s the best thing I can say about them.”

The Shamrocks (3-0 BCS Red, 7-0) had a few issues in the first half, fumbling the ball three times, two of which were lost.

They were still able to build a first-quarter lead thanks to a nine-yard pass from quarterback Nick Nelson to Anthony Latin, and a 25-yard touchdown scamper by standout running back Danny Vinson.

Vinson rushed for 168 yards on the night.

Berrien’s defense kept Buchanan at arms length while the offense caught up. The Bucks (1-1, 2-5) didn’t get much of anything all game.

The Shamrocks had eight sacks on Bucks quarterback Levi Zelmer on the night. Skylar Sawle and Kurt Krause each had three sacks, with Chris Pitone and Sean Carl each adding one apiece.

That’s been the story for the Shamrocks’ defense all season. Berrien Springs has outscored opponents 176-0 in the last four games.

“(The Bucks) throw the ball quite a bit,” Bergan said. “We were just going to try to cut our defensive ends loose a little bit and see if they could get some pressure. Actually our defensive tackle, Skylar Sawle, really had a great game.”

Buchanan tallied just 46 net yards on the night, including minus-3 rush yards. Zelmer went 9-of-21 passing for 49 yards, but also threw two interceptions, one of which was returned 48 yards for a touchdown by Berrien’s Payton White to open the fourth quarter.

Buchanan coach Mark Frey said it can be a challenge preparing for a team with as many weapons as the Shamrocks.

“You try not to think too much about their player here or their player there, just look at the big picture,” Frey said. “We came away at the half looking real good. I think they know now that we are a better team than maybe our record shows.

“We have a lot to work on. Especially in the second half tackling was a problem, and turnovers. You clean up those fundamental components of football and we’ll be a better team.”

Bergan said the first half was a bit closer than he would’ve liked, but saw his team adapt well on the field in the second.

“I think it was just don’t turn the ball over,” Bergan said on halftime adjustments. “Fundamental things. When you’ve got bad weather and you’re playing a rival, sometimes emotions get the better of you on both sides of the ball. It happens, but we just told them to come out, execute in the second half and take care of the football.”

The Shamrocks did come out quick in the third quarter.

Berrien got touchdowns on a 17-yard scramble by Nelson, as well as an 18-yard strike from Nelson to Latin. Vinson scored the team’s third touchdown of the quarter on a 54-yard run.

White’s interception return initiated the running clock in the fourth.

The Shamrocks will have a week off next week before playing Benton Harbor in the final game of the season. Bergan said he expects a tough battle against the Tigers.

“It’s going to be a physical game,” Bergan said. “I’ve seen them a little on film. They’re a good team.”