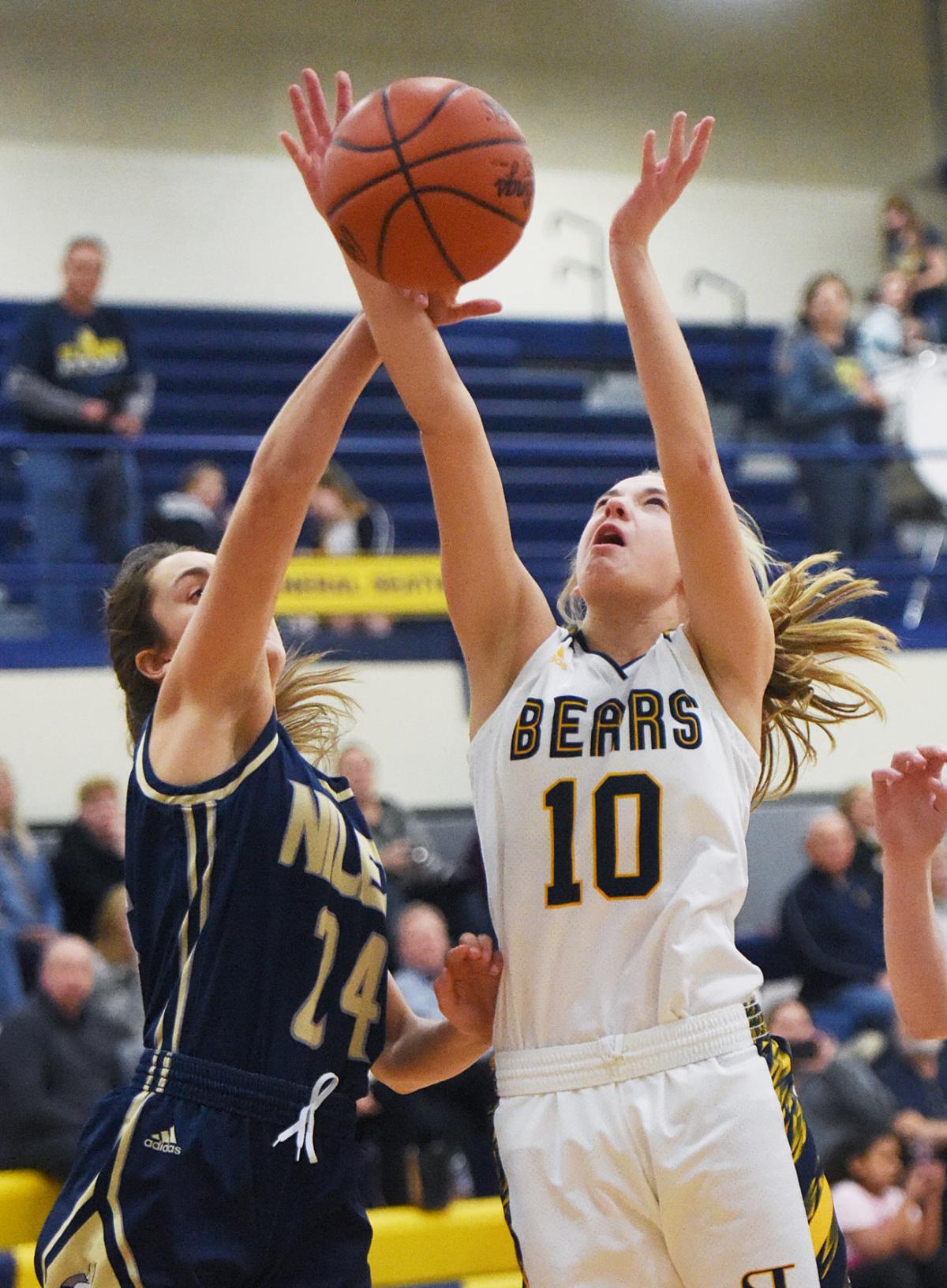 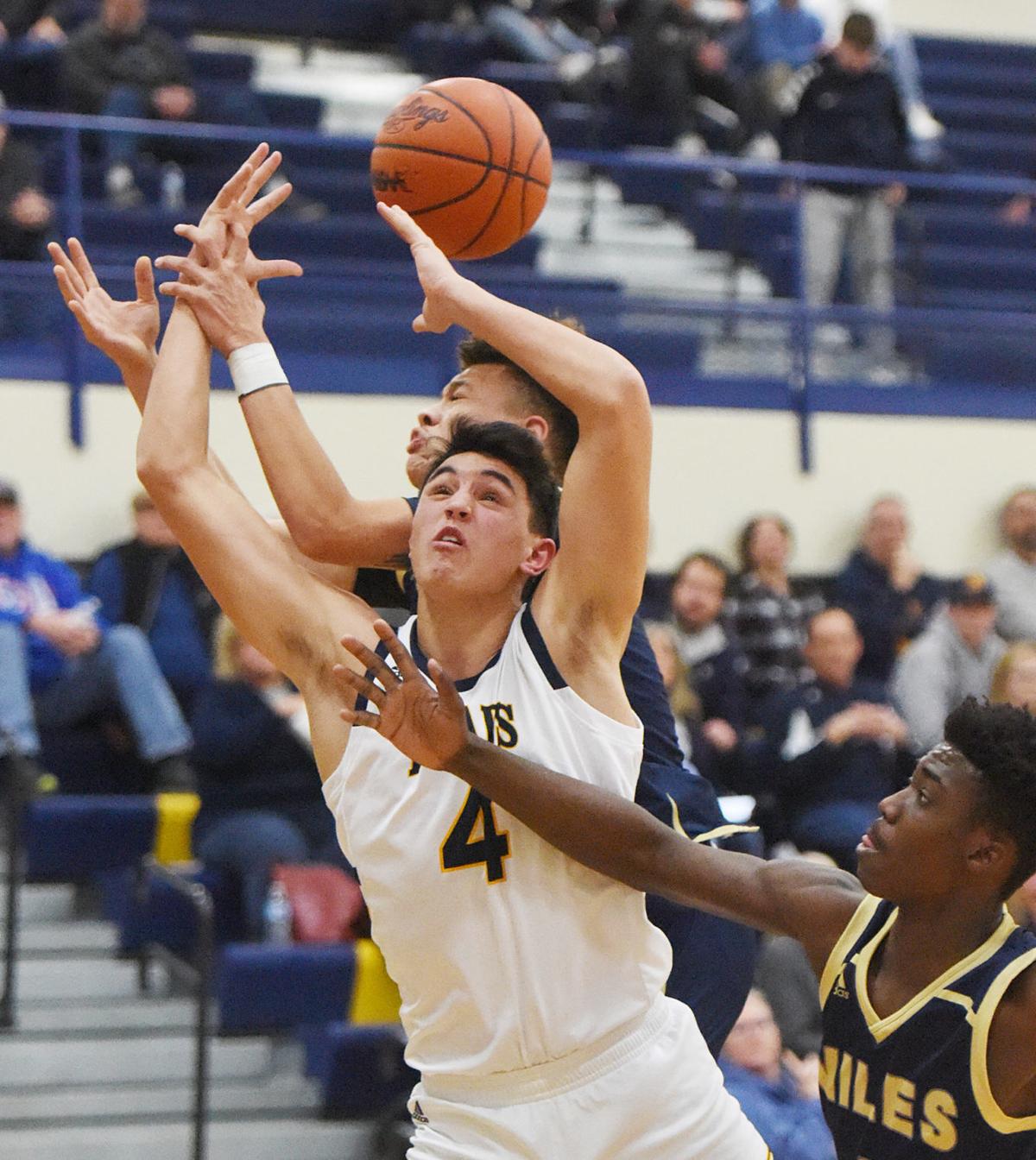 St. Joseph’s Nicholas Borre battles for a rebound against Niles’ Cerious Wilson, back, and Jordan Jones during the first half of Friday night’s game. 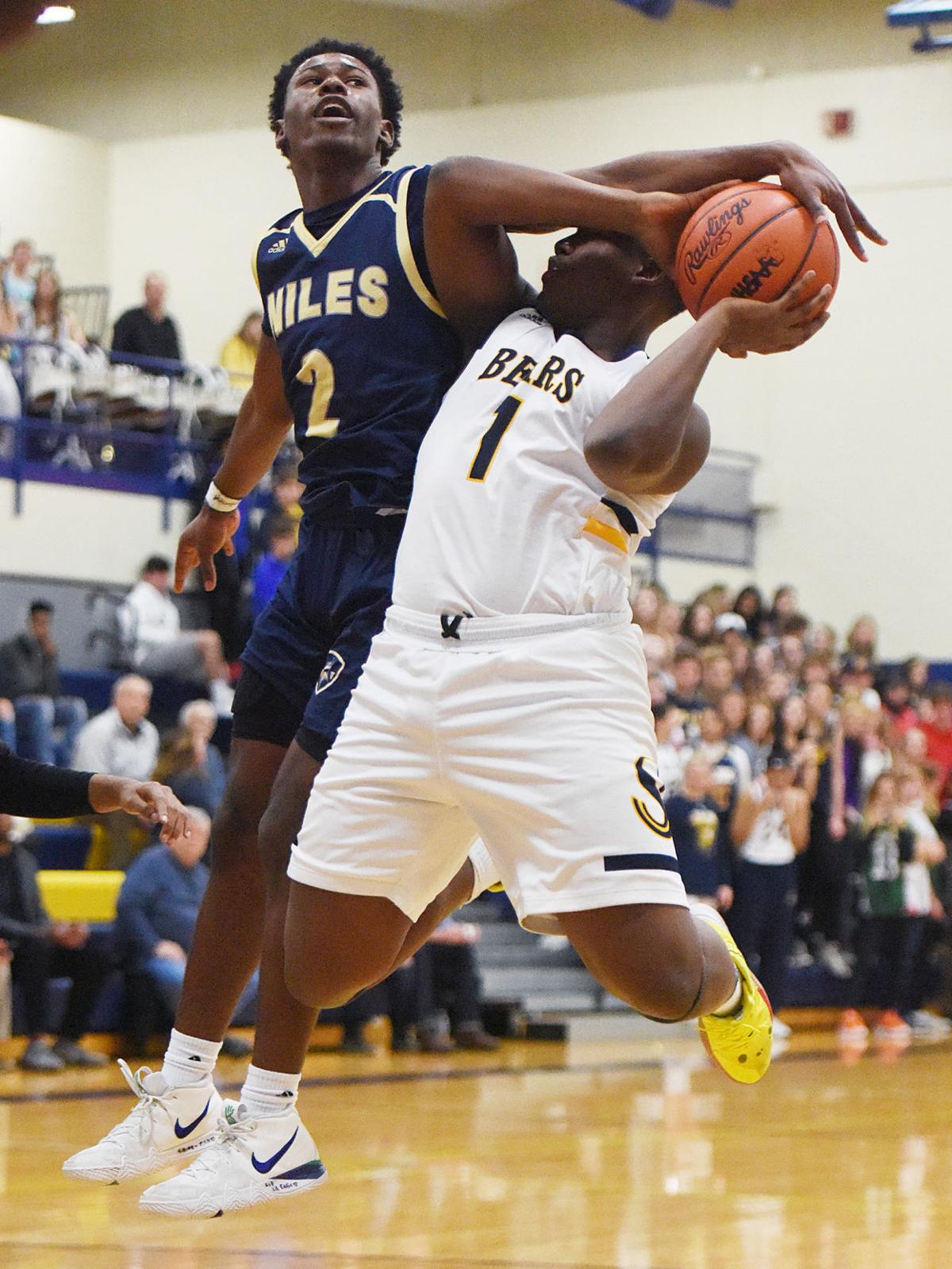 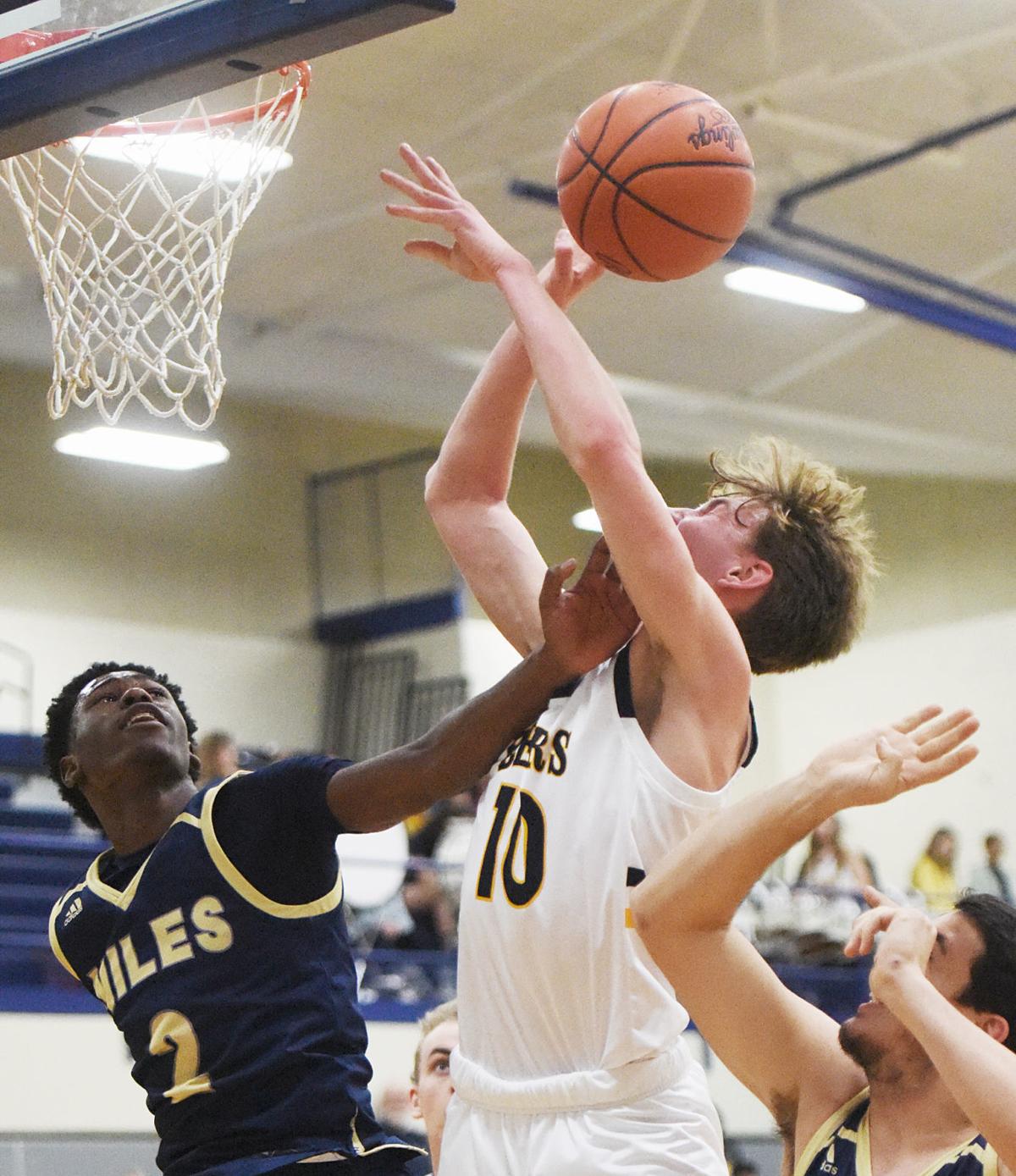 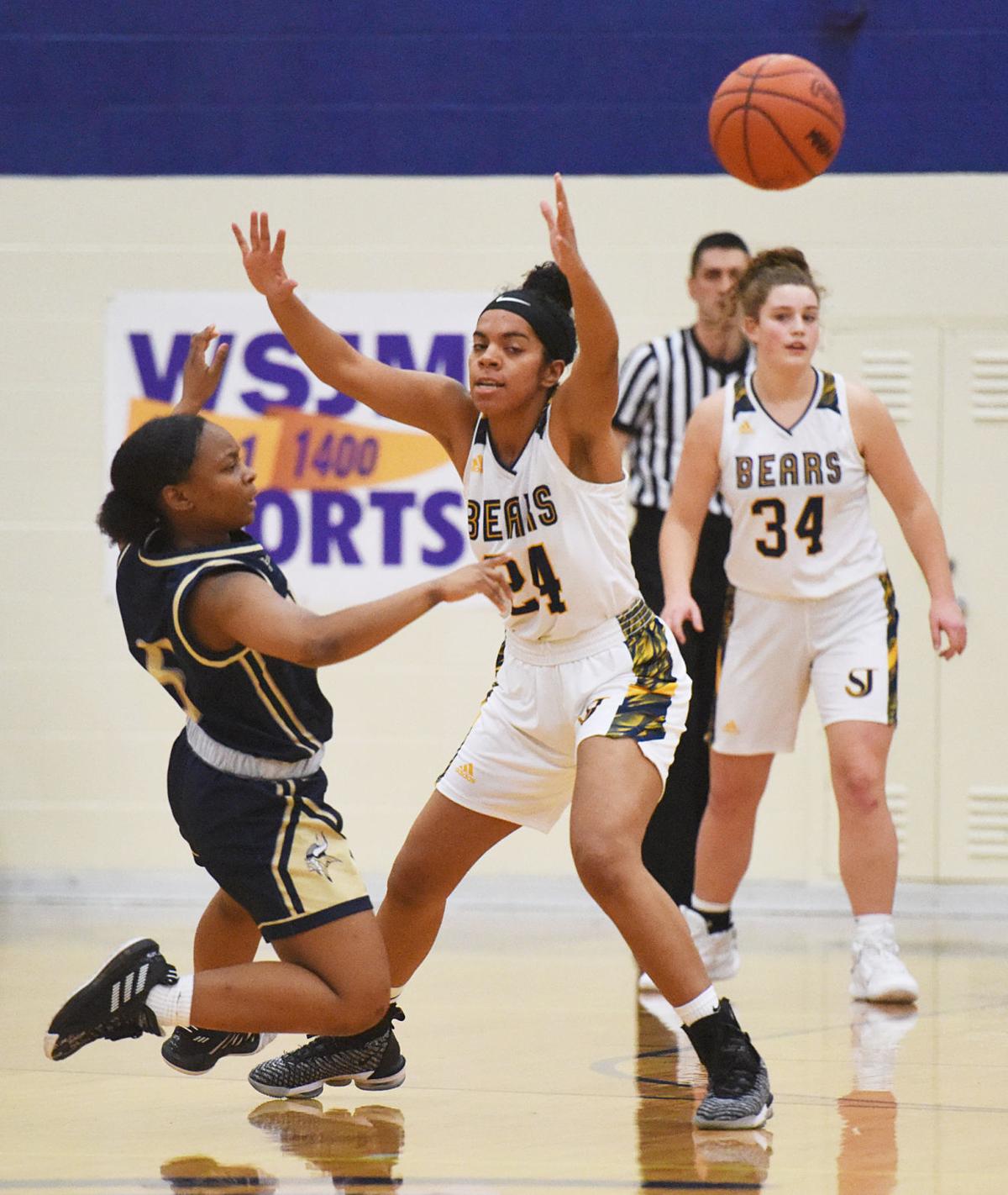 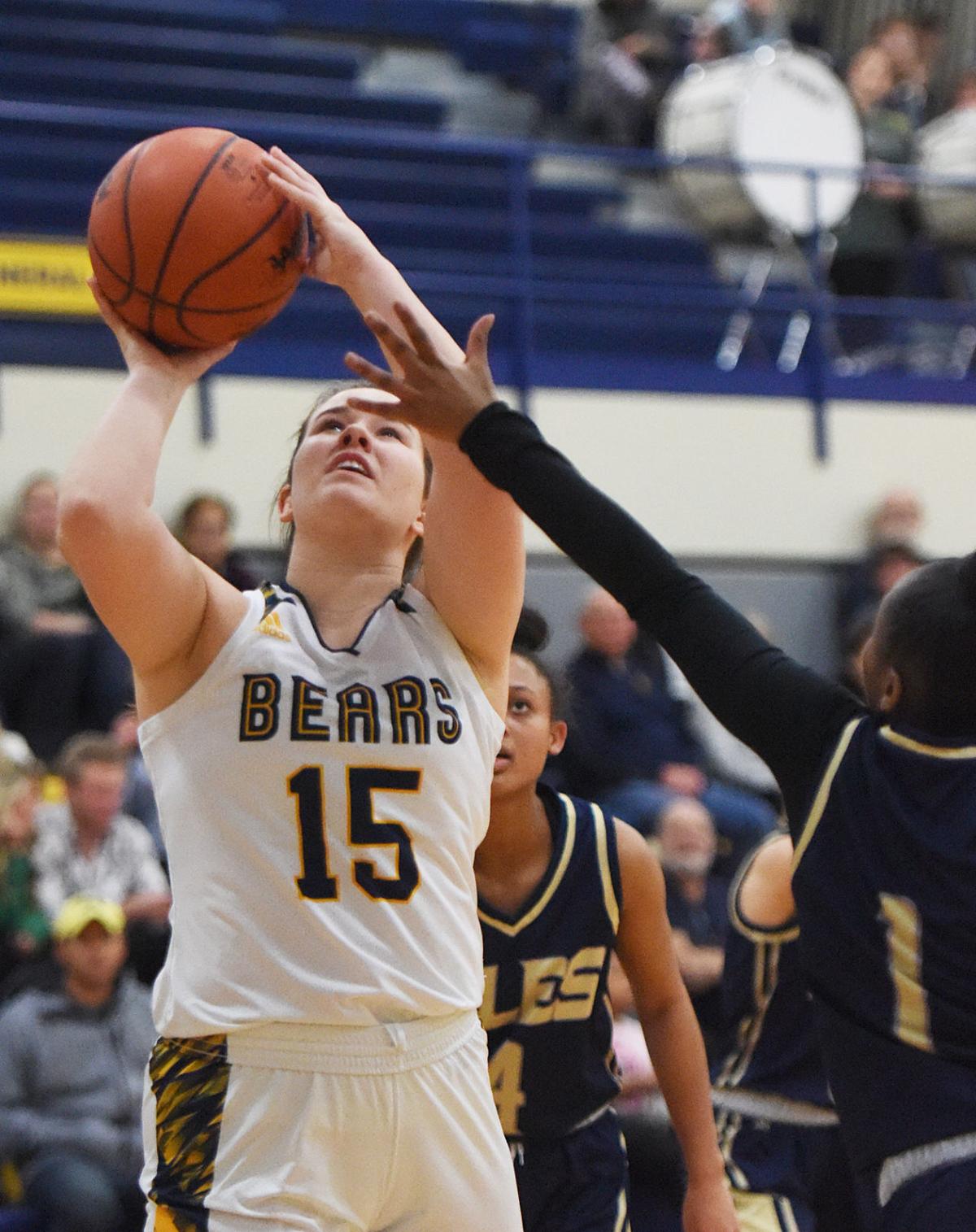 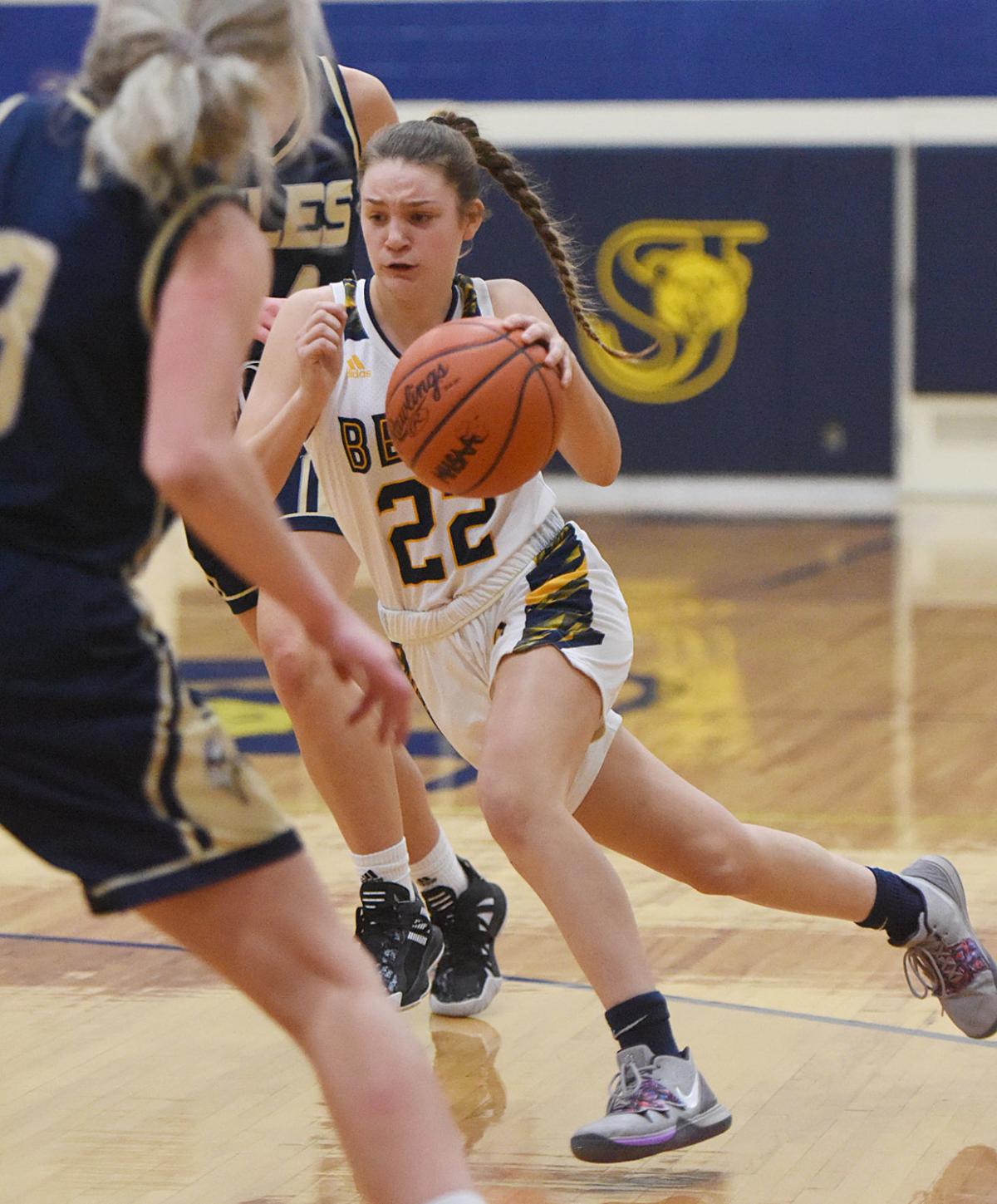 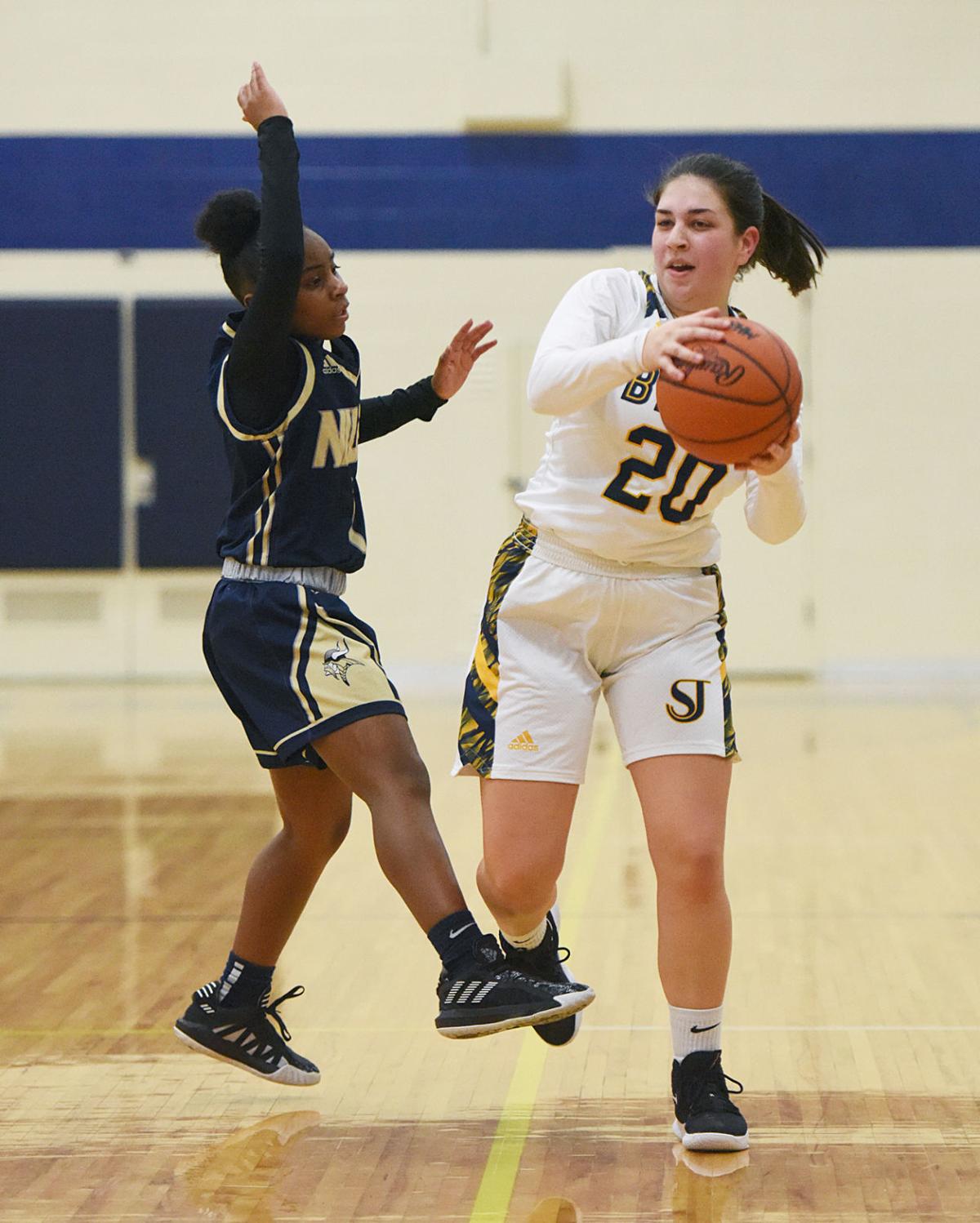 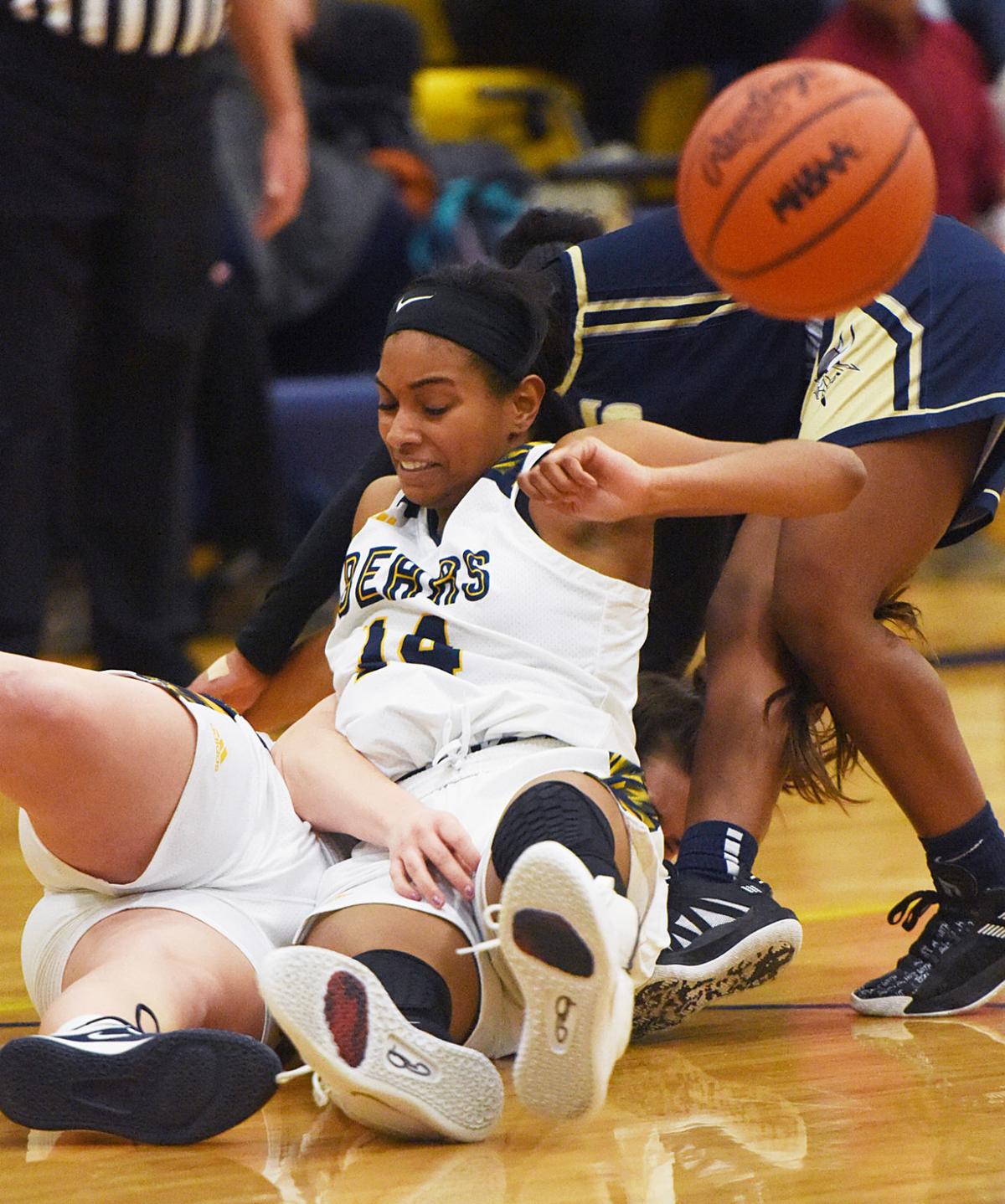 St. Joseph’s Nicholas Borre battles for a rebound against Niles’ Cerious Wilson, back, and Jordan Jones during the first half of Friday night’s game.

The Bears turned the ball over 25 times, but converted in key moments to hang on for a 59-54 win over the Vikings.

In the second game of the doubleheader, St. Joseph's boys also topped Niles, 47-42.

"I thought that we did a good job maintaining our composure, despite turning the ball over like maniacs," St. Joseph girls coach Tracey Bloodworth said. "They did a good job of sticking together even though we were kind of all over the place during that stretch."

With the Bears (4-0 SMAC West, 6-4) leading 44-43 with under five minutes to play, St. Joseph's Symone King drew a foul on Niles' Alexis Rauch while attempting a layup under the basket. Rauch was whistled for a foul, then an additional technical foul for her reaction to the call.

King made one of two foul shots, with Emma Inman stepping in to take the technical free throws. After sinking both, King added an additional bucket on the ensuing possession after the St. Joseph inbounds play to take a 49-43 lead.

"One thing that helped is that their player picked up that technical (foul)," said Bloodworth. "It's a big call. It's disappointing that it happened, but at the same time it did happen, and it was a big deal for us."

Niles (2-2, 5-4) pulled within four in the final minutes, but the Bears' ability to convert from the foul line helped St. Joseph put the game away.

King was a standout on both ends of the floor for the Bears, finishing with 24 points and eight rebounds. She also blocked two shots and had a pair of steals.

Inman added 14 points, 12 of which came on 3-pointers, all in the first half.

"Emma came out on fire," said Bloodworth. "(Niles) did a better job of guarding her in the second half, but it took so much attention that it opened Symone up, too. I thought that really opened things up for us."

Bloodworth was also impressed with the play of Cailynn Junk and Leah Barlow. Junk chipped in with nine points, and also had six rebounds, four assists and two steals. Barlow scored five points to go with three rebounds and three assists.

Alycia Patterson and Amara Palmer did a majority of the scoring for Niles, with Palmer putting up 24 and Patterson adding 22. Palmer and Patterson also led the Vikings in rebounding, grabbing six and seven, respectively.

"I think that's the best that I've seen Amara play," said Niles coach Jessica Johnson. "We struggled on the boards with boxing out. They had Alexandria (Malone) and Symone, and they just rebound really well. We struggled with having the self-discipline to go and box out before going for the ball, so I think that was the biggest struggle. Other than that, I'm proud of how the girls played."

Though Niles did not come out in the win column, the Vikings still had a reason to celebrate.

In the second quarter, the game was paused to honor Patterson, who had scored her 1,000th career point after sinking a deep 3-pointer from near the right wing.

"Alycia is the best player a coach could ask for," Johnson said. "She's a floor leader. The girls respond well to her, and she's just a great player. She actually had no idea that she was even close to 1,000 points. No idea. So we kept it a secret, and it was just killing us waiting for her to get those four points to make it to 1,000."

Neither team led by more than six points before the half ended in a 24-24 tie.

After a low-scoring third quarter that saw Niles pull ahead by four points on two separate occasions, the Bears' offense came alive, scoring 18 final-quarter points to put away the Vikings.

"I was pleased on how we responded when they took the lead in the third quarter," said Bears coach Gregg Schaffer. "They had some momentum, and we were able to hold our ground defensively and make a few plays to get the lead back.

"We did some good things offensively in the fourth quarter to hold them off. It was a really good game. Both teams played hard and did good things, and we feel fortunate to pull it out during the stretch."

The Bears balanced the scoring well all evening, with just a single player hitting double digits.

Brennen Kerns scored 12 for the Bears, with Nick Borre and Griffin Shinrock each adding eight. Grant Hardy and Andrew Blomgren each chipped in with six. Borre led the Bears in rebounds with eight.

"When we're playing well, that's what our scoring looks like," said Schaffer. "Tonight I thought we had good ball movement. We were making good decisions on when to attack and when not to, and that resulted in some balanced scoring and a better offensive night for us. We need to build on that."

Brayden Lake and Cerious Wilson led Niles, scoring 12 and 10 points respectively. Demarian Nichols chipped in eight before fouling out late in the fourth, and also pulled in seven rebounds.

St. Joseph's biggest lead was nine in the final quarter, but Niles was able to make some key baskets and force the Bears to sink foul shots late.

"The next step for our program is to develop a swagger, a moxy, to learn how to put in some key shots in these close games," said first-year Niles coach Patrick Touhey. "There was a moment there where we lost the battle on the boards. That was crucial. It gave them that spread there at the end."

Niles committed just five turnovers on the night, but failed to get to the line, shooting 0-of-4 from the stripe while the Bears sunk 16-of-24.